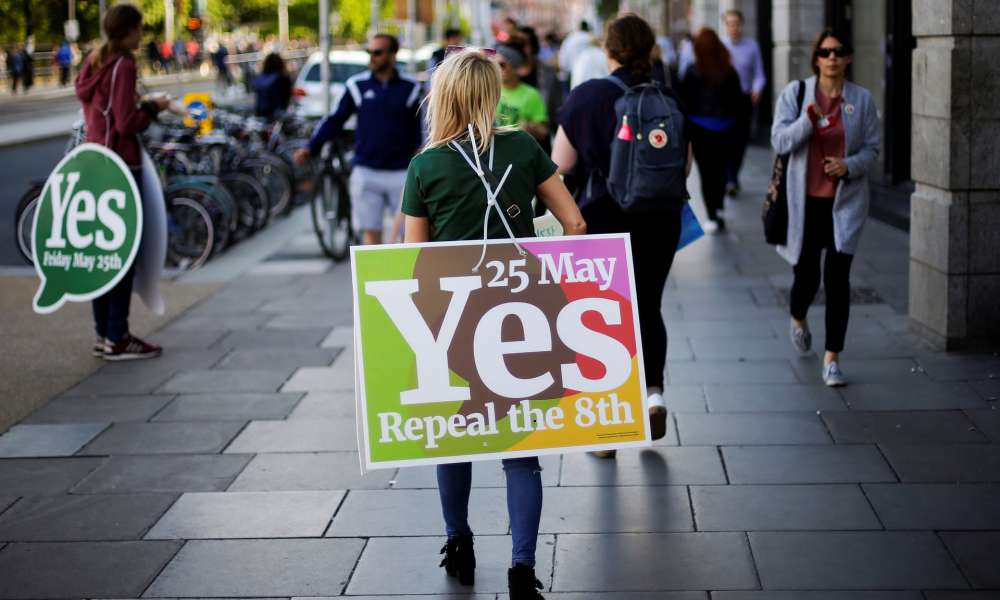 Ireland has voted by a landslide to lift the ban on abortion that had been enshrined in its constitution for three decades, the first exit polls from a historic referendum suggest. If confirmed at Saturday’s count, the shock result – three years after Ireland became the first country in the world to approve same-sex marriage by a popular vote – would underline the speed and scale of change in a country that is still majority Catholic.

Exit polls from the Irish Times and the national broadcaster RTÉ showed a clear two-thirds of the country supported change. Dublin, as expected, had voted overwhelmingly to end the abortion ban (77%), but so too did rural areas that anti-abortion activists had counted on to form a bulwark of conservative support for the restrictive status quo.

The Irish Times/Ipsos MRBI poll late on Friday suggested a 68% to 32% vote in favour of yes. The RTE exit poll of 3,000 voters suggested that 69.4% voted yes in the referendum compared with 30.6% who said no.

The exit poll results could signal a seminal defeat for the Catholic church’s power only months away from a papal visit to the country – the first since John Paul II’s triumphant tour in 1979. After Pope Francis leaves Ireland in August the Irish parliament will begin within weeks the process of introducing legislation that will legalise abortion for up to 12 weeks into pregnancy.

Friday’s good weather and strong feelings about the subject contributed to a high turnout across the country. The Irish taoiseach, Leo Varadkar, who supported the change and called the referendum a once-in-a-generation chance, said earlier on Friday that he was quietly confident that the high turnout was a good sign.

The province of Leinster outside Dublin was predicted to have voted at about 66% in favour of repeal, while Connacht-Ulster in the west was projected to be in favour of change by 59% to 41%.

The region includes Roscommon, the only county to have voted no to the marriage equality referendum in 2015.

Counting opens across the country at 9am on Saturday, with tallies expected to give a confident indication of the result by mid-morning or lunchtime and an official result to follow in the afternoon.

The scale of the projected victory was so big though that leading no campaigners conceded defeat within minutes. “With a result of that magnitude, clearly there was very little to be done,” said John McGuirk media manager with the SaveThe8th campaign. “Thank you to every no voter and campaigner.”