Cossacks and flowers as Putin dances at Austrian minister’s wedding 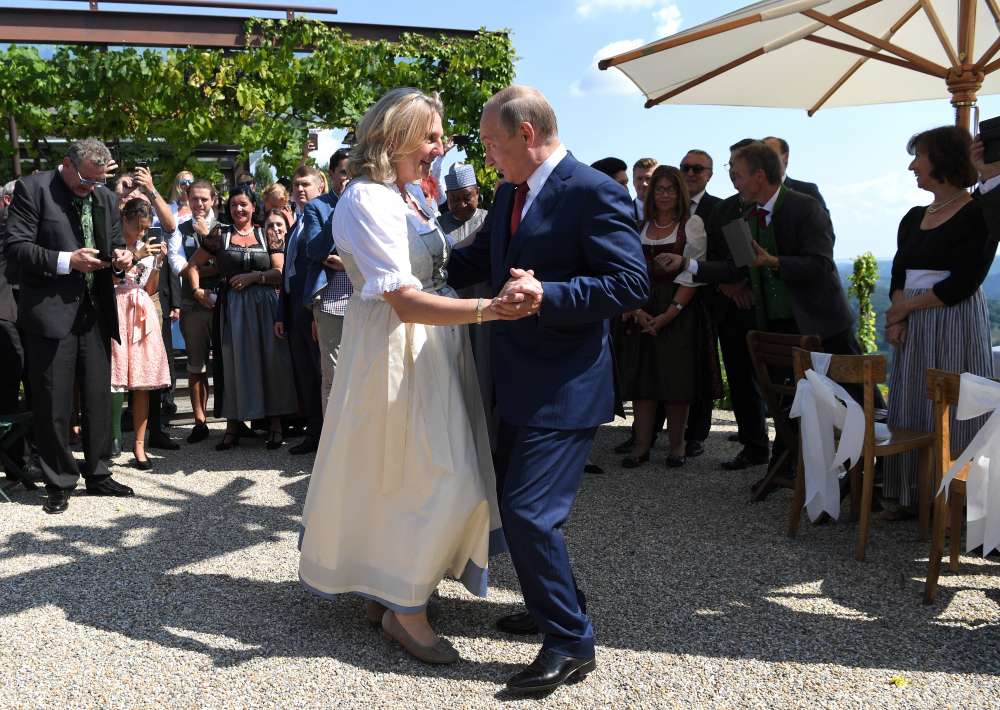 Putin arrived in a car carrying a bouquet of flowers and accompanied, local media said, by a troupe of Cossack singers booked to serenade the newlyweds – on a stopover on his way to meet German Chancellor Angela Merkel outside Berlin.

Photographs showed Kneissl, 53, smiling in a long white and cream “dirndl” dress and talking to Putin as they danced in a vineyard in southern Styria province, the venue of her wedding to entrepreneur Wolfgang Meilinger. Putin was pictured listening to her intently.

The invitation surprised many in Vienna and Moscow, particularly at a time when the European Union is at odds with Russia over its annexation of Ukraine’s Crimea region and other issues.

There have been no reports that Kneissl – a polyglot Middle East expert without political affiliation – has a particularly close friendship with Putin. But she was appointed to her job by the far-right Freedom Party (FPO) which has a cooperation agreement with Putin’s United Russia party.

FPO leader and Vice Chancellor Heinz-Christian Strache has expressed support for Russia and called for sanctions against Moscow to be lifted.

Chancellor Sebastian Kurz and his conservatives, who control Austria‘s EU policy, have said Austria will toe the EU line – though they have also pointed to Austria‘s history of neutrality and its relatively warm relations with Russia. Kurz also attended the wedding.

Strache, who joined Austria‘s governing coalition last year, praised Kneissl on Saturday as a “bridge builder” as he congratulated the married couple and wished them “all the luck in the world and eternal love!”

Joerg Leichtfried from the opposition Social Democrats tweeted that Austria‘s current presidency of the Council of the European Union put it in an especially delicate spot given tensions between Putin and the West.

“All the more symbolic and harmful to court the Russian president in this manner,” he said.

Putin was due to travel to Germany later on Saturday to meet Chancellor Angela Merkel for talks about Syria, Ukraine and energy.

Austria did not follow other members of the EU in expelling Russian diplomats after Britain accused the Kremlin of involvement in the poisoning of a former Russian spy and his daughter in England – a charge Moscow denies.

Putin visited Austria in June in his first trip to the West after being re-elected as president.

By In Cyprus
Previous articlePaphos Brit hospitalised after road accident
Next articleAutostrade vows to rebuild bridge; stops short of apology