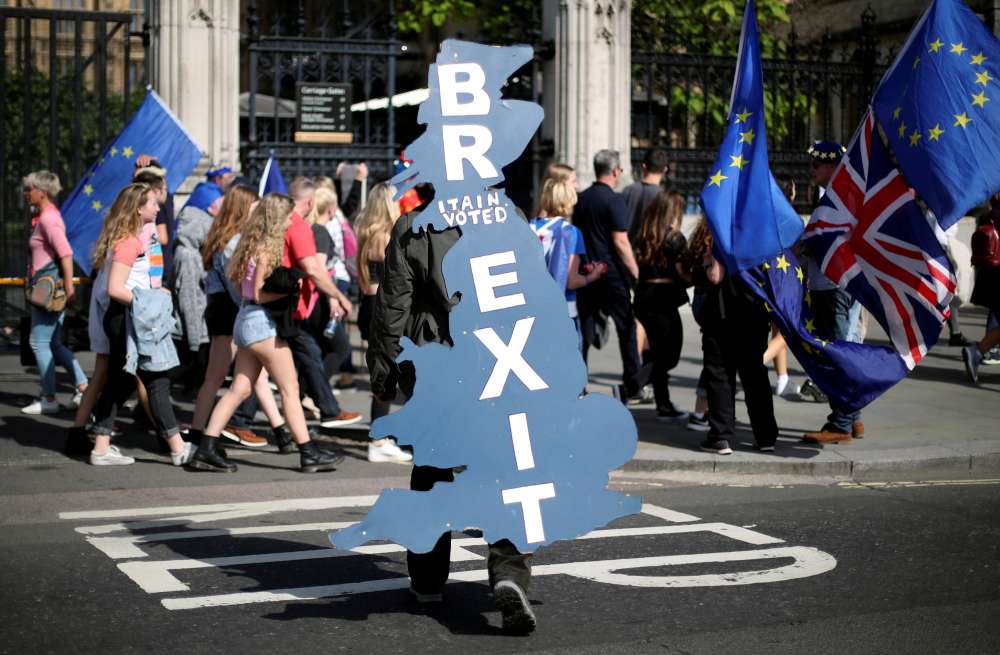 Prime Minister Boris Johnson’s suspension of the British parliament was unlawful, a Scottish court ruled on Wednesday, prompting immediate calls for lawmakers to return to work as the government and parliament battle over the future of Brexit.

Scotland’s highest court of appeal ruled that Johnson’s decision to prorogue, or suspend, parliament from Monday until Oct. 14 was unlawful — a blow for the government as it seeks to leave the European Union on Oct. 31 with or without a deal.

With seven weeks until Britain is due to leave the EU, the government and parliament are locked in conflict over the future of Brexit, with possible outcomes ranging from leaving without a deal to another referendum that could cancel the divorce.

“We are calling for parliament to be recalled immediately,” said Scottish National Party lawmaker Joanna Cherry, who led the challenge, after the verdict by Scotland’s Court of Session. “You cannot break the law with impunity, Boris Johnson.”

The government said it would appeal against the ruling to the Supreme Court, the United Kingdom’s highest judicial body.

Johnson announced on Aug. 28 that parliament would be prorogued, saying the government wanted the suspension so it could then launch a new legislative agenda.

Opponents said the real reason was to shut down debate and challenges to his Brexit plans. The court was shown documents that showed Johnson was considering prorogation weeks before he formally asked Queen Elizabeth to suspend the legislature.

Buckingham Palace declined to comment on the ruling. Misleading the monarch, who under Britain’s unwritten constitution must be apolitical, would be considered a grave affront.

Johnson, who was a figurehead for the Vote Leave campaign in the 2016 referendum, when 52 percent of voters backed Brexit, has rejected opposition complaints that he was denying parliament the right to debate Brexit in an undemocratic way.

Dominic Grieve, one of 21 Brexit rebels thrown out of Johnson’s Conservative Party last week, said that if Johnson had misled the queen over the reasons for prorogation, he should resign.

“If that were to be the case that this had happened, Boris Johnson would find himself in an untenable position in parliament,” Grieve told BBC TV.

BREXIT UP FOR GRABS

Johnson’s bid to quit the bloc “do or die” on Oct. 31 has hit the buffers: parliament has ordered him to delay Brexit until 2020 unless he strikes a deal while a new Brexit Party is threatening to poach Conservative voters.

After three years of tortuous Brexit crisis, British politics is in turmoil, with the prime minister blocked by parliament and an election or even a second referendum on the cards.

In an excoriating judgment, the Scottish judges ruled the principal reason for parliament’s suspension was to stymie lawmakers and allow Johnson to pursue a no-deal Brexit policy.

“This was an egregious case of a clear failure to comply with generally accepted standards of behaviour of public authorities,” concluded one judge, Philip Brodie, according to a summary of the court verdict.

Judge James Drummond Young had determined that “the only inference that could be drawn was that the UK government and the Prime Minister wished to restrict Parliament”, it added.

The 2016 Brexit referendum showed a United Kingdom divided about much more than the EU, and has given rise to soul-searching about everything from secession and immigration to capitalism, empire and modern Britishness.

It has also triggered civil war inside both of Britain’s main political parties as dozens of lawmakers put what they see as the United Kingdom’s fate above that of party loyalty.

The divisions in the opposition Labour Party over Brexit were on display on Wednesday, when its deputy leader, Tom Watson, said he supported pressing for a second referendum before an early national election.

“So let’s deal with Brexit, in a referendum, where every person can have their say, and then come together and fight an election on Labour’s positive social agenda on our own terms, not on Boris Johnson’s Brexit ‘do or die’,” he said in a speech in London.

His argument, which puts him at odds with leader Jeremy Corbyn, is that an election might fail to resolve the deadlock over Brexit. Corbyn says Labour would offer the people a second referendum on a credible option to leave against remaining in the EU after an election.

Nigel Farage, leader of the Brexit Party which could take votes away from both main parties, offered Johnson an election pact on Wednesday but warned that unless there was a clean break with the EU, the Conservatives would take a “real kicking” in any election and could not win a majority.

“If we go beyond the 31st of October and we are still a member of the European Union — which looks increasingly likely — then a lot of votes will shift from the Conservative Party to the Brexit Party,” Farage told reporters.