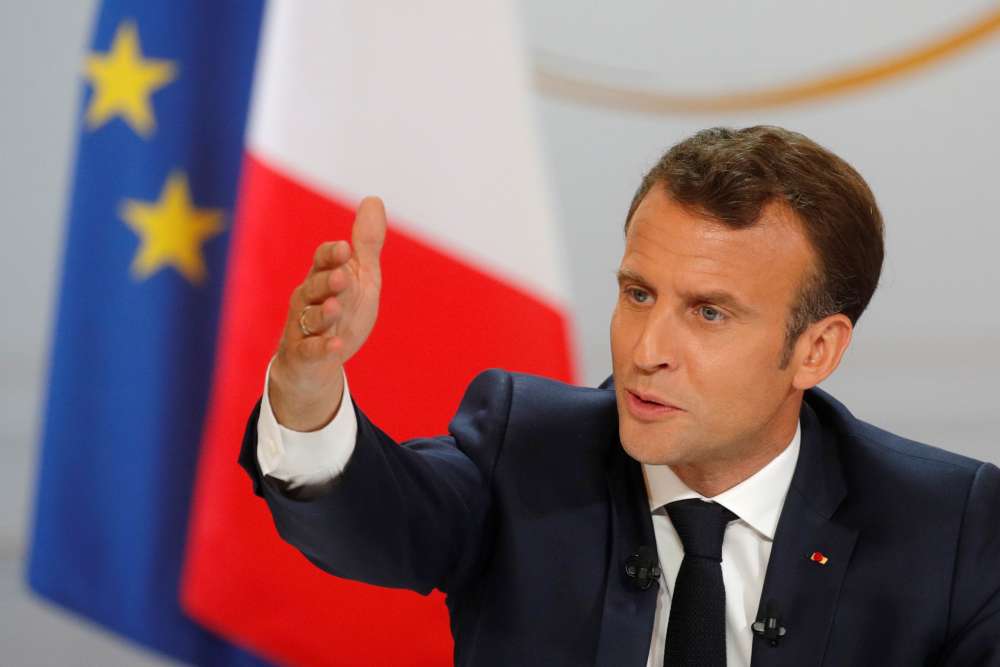 At the first major news conference of his presidency, Emmanuel Macron pledged to cut taxes on Thursday and said the French would have to work longer as he outlined his response to months of anti-government protests that have shaken his authority.

Speaking in a gilded hall at the Elysee Palace, seated behind a white desk with the French tricolour and European Union flags flanking him, Macron took reporters’ questions for nearly two-and-a-half hours, part of an effort to redress the rocky relationship he has developed with the media.

He apologised – not for the first time – for his sometimes sharp tongue and cutting comments, which have earned him a reputation for arrogance and contributed to a deep slump in his popularity ratings, which are showing some signs of recovery.

“I regret them deeply,” Macron said of the barbs, which included him telling an unemployed gardener to cross the road and find a job. “I think they did not show me as I am.”

Almost two years into his five-year term, and following a national listening tour, the prime-time event was also Macron’s attempt to quell nearly six months of ‘yellow vest’ protests that have brought weekly unrest to the country.

A first slate of economic measures put forward last December, and worth some 10 billion euros, failed to calm anger among lower-income workers and prompted Macron’s decision to hold a “great debate” with citizens.

The 41-year-old president, a former investment banker and economy minister, said he wanted a significant cut in income taxes, saying it would be worth around 5 billion euros, financed by closing loopholes for some companies.

The tax cuts come as France is trying to keep its budget deficit in check, while at the same time hoping to rid itself of a reputation as the world’s most highly taxed country. Figures from the OECD show France‘s ‘tax-take’ is equivalent to 54 percent of gross domestic product.

Along with the tax relief, Macron said government spending would be squeezed and the French would have to work longer to build up social contributions, an announcement that is unlikely to be popular in a nation known for its 35-hour week.

“We must work more, I’ve said it before,” said Macron, who is renowned for tiring out his staff. “France works much less than its neighbours. We need to have a real debate on this.”

While providing few details on his proposals, he ruled out making people work longer per week or cutting the number of bank holidays, and he said he was not in favour of extending the current minimum retirement age of 62.

“CHILDREN OF THE ENLIGHTENMENT”

With ‘yellow vest’ protesters decrying what they see as the political establishment’s elitism, Macron said he wanted to get the French more involved in the democratic process by making it easier to hold referendums on limited number of issues.

He also said he wanted to abolish the Ecole Nationale d’Administration, the elite school that trains France‘s corporate and political leaders, saying new ways needed to be found of recruiting top-class civil servants.

“It’s not about scrapping one thing or another to create a symbol,” said Macron, himself a graduate of ENA. “But our high level public service cannot be exempt from modernisation.”

He also talked of a new push to decentralise government, breaking away from the “dirigisme” of the past, with policy decided and directed from Paris. He said changes would come within a year, including no more schools or hospitals being closed without the backing of the local mayor.

Although the number of demonstrators has declined since a peak in November, protesters clashed with police for a 23rd straight week last Saturday and the sustained unrest has had a draining effect on business, tourism and the economy.

It has also left Macron facing an uphill battle ahead of elections to the European Parliament next month, with polls showing the far-right party of Marine Le Pen is likely to perform well, potentially beating Macron’s En Marche.

Thursday’s policy proposals are the direct result of the three-month national debate, during which Macron toured the country, literally rolling up his sleeves to discuss everything from high taxes to local democracy with groups of citizens.

“We are above all children of the Enlightenment,” he said as the Elysee news conference approached the two-hour mark. “And it is from these debates, these deliberations, this capacity to contradict one another…that good solutions can emerge for the country.”

Despite the criticism levelled at him, and opinion poll ratings that show his support at around 30 percent, Macron did not pull back from any policies on Thursday, saying his government would push on with his reform drive.

“I asked myself: Should we stop everything that was done over the past two years? Did we take a wrong turn? I believe quite the opposite,” he said.

The ‘yellow vest’ street rebellion erupted over planned diesel tax hikes last November, but quickly developed into a broader backlash against inequality and a political elite perceived as having lost touch with ordinary voters.

Macron, who swept to power promising to “transform France” and “make work pay”, has seen his ambitious reform agenda derailed – or at least knocked off target – by the unrest. Pension and unemployment insurance reforms planned for 2019 have made little progress so far.

Macron said the pension reform would be presented to cabinet this summer and that future increases in the lowest pensions would be indexed to inflation, another effort to provide lower-income workers with some succour.