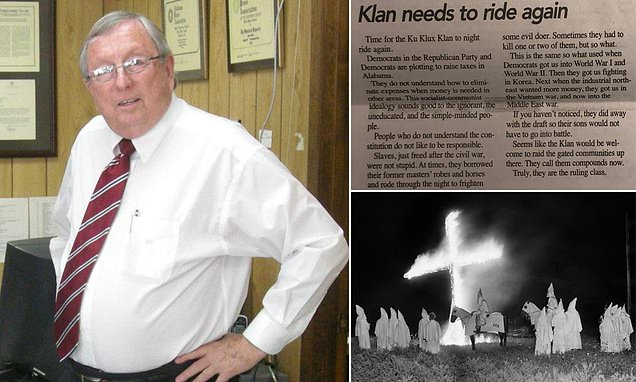 A small town Alabama newspaper that drew condemnation for an editorial this month calling for the Ku Klux Klan to “ride again” has named an African-American woman as its new editor and publisher, the paper said in a statement.

Elecia R. Dexter on Friday took the reins of the weekly Democrat-Reporter in Linden, Alabama, from Goodloe Sutton, 79, the longtime owner of the paper who wrote the incendiary editorial that brought sharp rebukes from elected officials in the state and the public.

“Ms. Dexter is coming in at a pivotal time for the newspaper and you may have full confidence in her ability to handle these challenging times,” the statement said. It is unclear whether Sutton remains the owner of the paper.

Dexter has “strong roots and a rich history” in the area, and she will continue the paper’s long journalistic tradition while moving it in a new direction, according to the release.

Sutton, who has led the publication for the past 50 years, told the Montgomery Advertiser newspaper last week he had written the editorial which called for a return of the KKK and railed against Democrats.

The KKK was a white supremacist group that terrorized blacks in the U.S. South and later targeted other minority groups, following the Civil War and the emancipation of African-American slaves.

“Good riddance Goodloe,” U.S. Senator Doug Jones, an Alabama Democrat, tweeted in response to the news of Sutton stepping down. “His dangerous views do not represent Alabama or the small-town papers in Alabama that do great work every day.”

Sutton and his wife, Jean, won acclaim in the 1990s for a series of articles in the Democrat-Reporter that detailed corruption in their local sheriff’s department.

Jean Sutton died in 2003 from cancer, according to her obituary.

The circulation of the Democrat-Reporter, which is more than 100 years old and does not publish online, was about 3,000 in 2015, according to a report that year in the Montgomery-Advertiser.

By In Cyprus
Previous articleA prayer for Brexit: Church to plead for unity – Britain’s next Brexit flashpoint
Next articleVenezuela’s Guaido says “all options open” after Maduro blocks aid