CMP archaeologists appeal to the public for information on missing persons 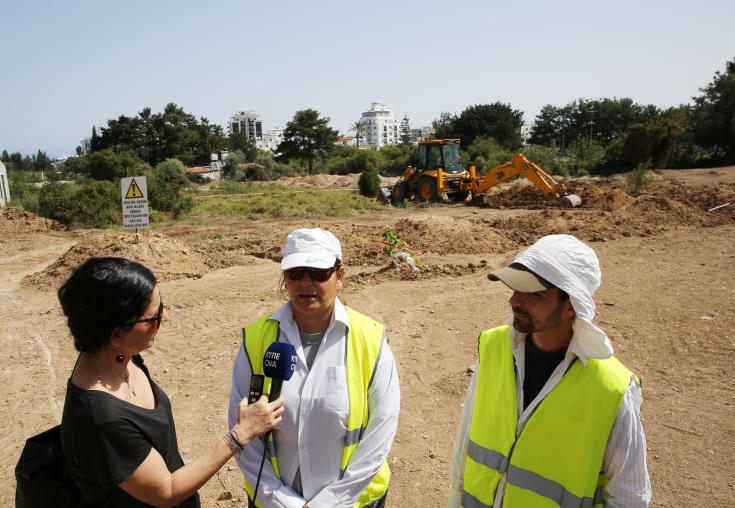 In December 2015, the leaders of the two communities Cyprus President Nicos Anastasiades and Turkish Cypriot leader Mustafa Akinci visited the CMP (Committee on Missing Persons) anthropological laboratory in Nicosia and they appealed to the public to come forward and share any information they have on missing persons in Cyprus.

The same appeal was repeated the next year when President Anastasiades posted a message on his Facebook account calling on people to give information on possible burial sites. Religious leaders have also issued a written statement urging people to come forward and provide information.

The missing persons issue is one of the most tragic aspects of the Cyprus problem. When Turkey invaded the island on 1974, hundreds of Greek Cypriots went missing, (nearly 1,500) including soldiers, elderly people, women and children. Since then their fate remains unknown. Some 500 Turkish Cypriots also went missing during the 1963-64 period when inter-commmunal fighting broke out and during the 1974 Turkish invasion.

Forty-four years later, the information comes in drip-fed. But time is crucial as most of the people who might have information or were eye witnesses are getting old and passing away. Relatives of the missing are also ageing, most are in ill health or have passed away.

CMP archaeologists who work in excavation and exhumation sites where missing persons are believed to have been buried are the first to experience the relief and satisfaction when they unearth human remains. For most of us this sounds repulsive but the archaeologists who are devoted to giving an end to the ordeal of the relatives of the missing, know that locating human remains is a huge step to this end.

Currently there are four groups of archaeologists who work on excavation sites for remains of Greek Cypriots and three groups for Turkish Cypriots. Soon, another two groups are set to start excavation.

CNA has visited two excavation sites in Turkish occupied village of Mia Milia and the northern coastal town of Keryneia. Archeologists Andreas Christou and Gulseren Baranhan with the help of UNFICYP arranged our visits to the sites.

The first site, where excavations take place, is located near a brick factory which was in operation until 1970. A huge funnel stands in the area, a mark that the location is accurate.

People gave information about possible burials of around 6-7 Turkish Cypriots. The information is considered accurate and serious.
Excavations began on September 13th 2017. So far no human remains have been located but the work will carry on and archaeologists are waiting for the green light to excavate on a different location, very close to the first site.

At the site in Mia Milia we met Turkish Cypriot archaeologist Cinar Karal and Green Cypriot archaeologist Nolli Moysi. Cinar explained to CNA that the brick factory stood in the area until 1970. She said that the archaeologists with a backhoe loader opened a huge cavity from which they removed tons of soil to be examined for bones. No remains were located and the soil is now transferred back to the cavity in order to backfill it.

Cinar has been working for the CMP since 2009.

She never counted the sites she visited for excavations or exhumations but – as she has told us – every time the feelings are the same.
‘’I like my job, we are helping the relatives, every time we start excavating we are hopeful that we will find bones, we are searching very carefully, there is always hope inside us’’, she said.

We ask Cinar to send a message to those who might have information on burial sites.
She says that a long time has passed since the war, most of the people have passed away, many more are getting too old and they should come forward and share whatever they know to give relief to the relatives.

‘’Please give information to us, for the sake of the relatives because they are waiting, the families are waiting, they hope their missing persons are somewhere but until we tell them they are dead they cannot accept it’’, Cinar tells us.

Nolli Moysi is an archaeologist with CMP since 2012.

She says that they are all proud for the work they are doing because it is significant for Cyprus in general and for the Cyprus problem.
‘’At the beginning of course we all feel anxious when we excavate, this is a job that needs patience, we need to work hard and with persistence’’, she says.

She tells us that if there is disappointment, then you cannot possibly do this job.
‘’Every year it is even more difficult to find remains due to the lack of information, problems that you are facing, changes in the environment, so every year you have to be working harder’’, she says.

She too appeals to the public to give information and sends a message to the people pointing out that their privacy and anonymity are respected.

We left Mia Milia behind and the huge mosque that is being constructed in the area and headed to Keryneia, where we arrived within a 30 minute drive.

The second site of excavations is near the Nicosia-Keryneia highway. Guliz Buruncuk and Frixos Markou are the archeologists who have been working at the site along with backhoe loader driver Umit Hadimci.
The work started last November and so far some human remains were found in the area, however they are not in anatomical position, but in a commingle one and DNA tests are still underway.

Guliz tells us that they had information about Greek Cypriots being buried here. The information came from someone who said that while driving on the road to Nicosia, he saw a lorry and people dumping bodies.

She explained that there was a river bed in the area and the archaeologists digging the south area are using the trenching method.
‘’While extending the excavation on the west side we found some bones but not in anatomical position, in commingle, later we found out that while the apartments were constructed, more bones were found but were moved’’ Guliz said.

Frixos Markou has been working for the CMP for almost eight years.
He says that every time they are heading to an excavation site, they have the same hope that they will find bones.
‘’If we don’t have this hope, then we would not have the strength and attitude to carry on’’, he explains.

He also points out that sharing information is of crucial importance especially if this information comes from older people who will probably pass away soon.
‘’Anyone who knows something, who has seen something, can come to us, information can be given anonymously, even on the spot, when we are excavating one can come and put a mark, this has happened before’’, he says.

He also says that most of the time the archaeologists themselves tell the neighbours or bystanders or people who just pass from the area, what they are looking for and ask them to share information.

‘’We often go to coffeeshops where older people meet and we believe they might know something’’, Frixos says.
He explains that each excavation/exhumation has its own degree of difficulty, adding that a well from where water cannot be pumped out easily is as difficult as digging on a slope.

Umit Hadimci is the backhoe loader driver at the excavation site in Keryneia. He is new to the job and was hired only six months ago.
‘’I like driving the machine and helping in locating missing persons, I am happy when this happens because families will be happy too’’, he tells us.

It is April, but Cyprus’ scorching sun is already unbearable. But not for the archaeologists who are used to it and return to the site right after we thank them and say goodbye.
We leave Keryneia behind, the sound of the backhoe loader and the crows flying over the crater, just like a scene from a movie, one would say…