Herodotou: Banks need to step up efforts to tackle NPLs 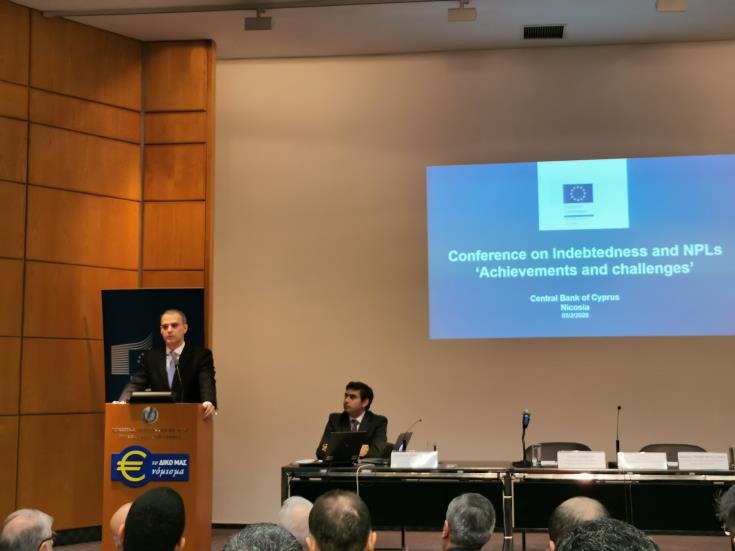 Central Bank of Cyprus Governor Constantinos Herodotou on Wednesday called on Cyprus banks to step up efforts to further reduce non-performing loans (NPLs) since a favourable environment is still in place.

Addressing a conference titled “Indebtedness and NPLs, achievements and challenges” co-hosted by CBC and the European Commission’s Representation in Cyprus, Herodotou also said that banks in Cyprus have reduced their NPLs by €19 billion since December 2014.

But “there is still work to be done” considering that the island’s NPL ratio stands at 30% compared to the Eurozone’s  average of 3% and the Single Supervisory Mechanism’s 10% threshold.

Herodotou then called on banks to step up their efforts to tackle NPLs as the prevailing environment remains helpful due to negative interest rates which push up collateral valuations while the investor’s “search for yield” pushes asset valuations higher. This facilitates the sale of NPL portfolios, he explained.

“That’s why I urge the banks to mobilise and fix their balance sheets these favourable conditions last because I can assure that everyone in the (ECB) governing council is concerned about the other side of the effects of negative interest rates,” he said.

He also urged banks to up the pace in NPL resolution as implementation phase of Minimum requirements for own funds and eligible liabilities (MREL), a new capital buffer in case of bank resolution, is about to begin which “for our bans is a costly capital requirement” due to high NPLs.

On his part, Paolo Fioretti, ESM deputy head for banking and coordinator for Cyprus in the ESM’s early warning system  praised Cyprus’ “enormous effort” since the 2013 financial crisis.

But, he added, “the NPL ratio in Cyprus remains the second highest in the euro area. And the improvement was almost exclusively due to the transfer of NPLs to outside the banking sector.”

“Private sector deleveraging has been more limited and sustainable debt restructuring has proven challenging,” he also said, underscoring that it is important to maintain a stable and predictable legal environment.

Maintaining a stable legal environment, he added, “will lead to less volatile and more favourable and predictable NPL prices.”

“This is crucial for dealing with legacy issues related to unsolvable loans. It will also help to increase the banking system’s resilience going forward,” Fioretti concluded

Ierotheos Papadopoulos, Head of the European Commission’s representation to Cyprus also praised Cyprus’ progress since the crisis, noting however that Cyprus still has the second highest private debt in the Eurozone after Luxemburg and the second highest NPL rate after Greece.

“Therefore, we need to make another stocktaking on where Cyprus stands with regard to the banking sector, to look back and to look to the road ahead.

“Everyone, whether participating in the decision-making or not, from citizens to the politicians, academics and technocrats alike, need to place the public interest above everything else. More work needs to be done to further improve the banking sector,” he concluded.