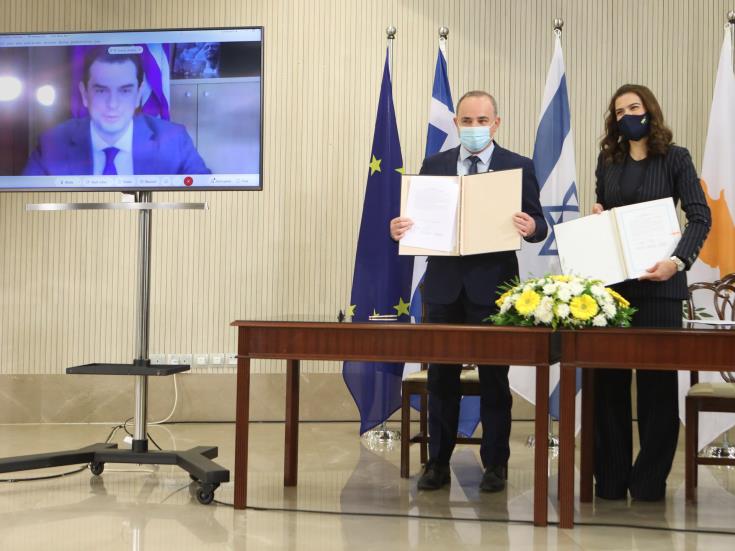 Cyprus, Israel and Greece signed on Monday a Memorandum of Understanding taking another step towards connecting the electricity grids via the EuroAsia Interconnector, a 1,208-kilometre 2,000 MW capacity subsea HVDC cable.

The Memorandum was signed in a special ceremony in the Presidential Palace by the Ministers of Energy of Cyprus and Israel, Natasa Pilides and Yuval Steinitz and virtually by their Greek counterpart Constantinos Skrekas.

In a joint statement issued after the ceremony, the three Ministers said “in recognizing the high level of trilateral cooperation in the field of energy between Cyprus, Israel and Greece, view the EuroAsia Interconnector, an EU Project of Common Interest, as a major step forward for providing the necessary synergies that will facilitate the integration of additional renewable energy sources in their respective electricity and primary energy supply mixes, thereby enhancing the ability of the three countries to meet their commitments under the Paris Agreement on Climate Change.”

“In this context, the Ministers agree to promote cooperation to examine the possibility of planning, as well as the potential development and implementation of the Project. Inter alia, such cooperation will involve facilitating the timely granting of necessary permits and approvals, the discussions and coordination between electricity regulatory authorities and Electricity Transmission System Operators, the harmonisation of their respective technical standards and examining ways and means of ensuring the safety, security, sustainability, resilience and reliability of the electricity interconnector cable,” the statement said.

In her remarks, Pilides said “this event marks another important milestone in the joint efforts of our three countries to promote regional cooperation in the field of energy.”

“Indicating the strong bonds between our people and building on the work done by our governments over the past few years, especially during the trilateral summits of our Heads of State, the MoU that we sign today enhances further the cooperation between Cyprus, Israel and Greece in supporting the planning, potential development and implementation of the EuroAsia Interconnector, as an additional element of the emerging Eastern Mediterranean Energy Corridor,” she said.

The Interconnector’s fist phase is estimated to become operational in 2025 and “will not only connect our island with the energy grids of Asia and Europe, but will also contribute to the completion of the European Internal Market. As such, it is acknowledged by the European Commission as a key Project of Common Interest and eligible for financing from the “Connecting Europe Facility”, Pilides added.

“For Cyprus in particular, the EuroAsia Interconnector will constitute a decisive step towards ending the island’s energy isolation and, consequently, our dependence on heavy fuel,” the Cypriot Minister concluded.

On his part, the Israeli Minister stated that “the signing ceremony today is another token of the friendship, some kind of a special alliance between our countries, the three democracies in the Eastern Mediterranean, Greece, Cyprus and Israel.”

He also stated that the Euro Asia Interconnector is the second project between the three countries following the intergovernmental agreement on the Eastern Mediterranean Gas Pipeline.

Furthermore, Steinitz referred to tomorrow’s meeting in Cairo of the founding members of the Eastern Mediterranean Gas Forum (EMFF), noting that this collaboration extends beyond the three countries, as apart from Greece, Cyprus and Greece, it covers members such as Egypt, Italy, Jordan and the Palestinian Authority, while other countries aspire to join such as France, or the US with an observer status.

“It’s the three of us, Greece, Cyprus and Israel but it is also a broader collaboration in the region and, who knows, maybe one day also another country that is sitting north from here will want to join the regional cooperation and to live peacefully with nice collaboration and cooperation with the rest of us,” he said in a remark directed to Turkey, adding that “this would be of course a good development if one day it would take place as well.” Turkey invaded Cyprus in 1974 and occupies 37% of the island`s territory while it fails to recognise its exclusive economic zone and has tried to obstruct its hydrocarbon exploration programme.

In his remarks, Skrekas highlighted the projects “historic significance,” as “the Euro Asia electricity interconnector aspires to create the first bi-directional electricity highway that will transport increasing volumes for green power form the eastern Mediterranean to the heart of the integrated electricity grid.”

“Although the idea for the EuroAsia Interconnector dates back to 2012, the project is currently more mature and more competitive as it approaches its final investment decision” he added.

He furthermore said “the electricity connector is also a project that reaffirms the strategic cooperation of our three countries that took its current systematic form almost ten years ago along with the East Med Gas Pipeline and our evolving security cooperation.”

“I strongly believe that the Euro Asia Interconnector can emerge as one of the most important examples of our deepening partnership,” he concluded.