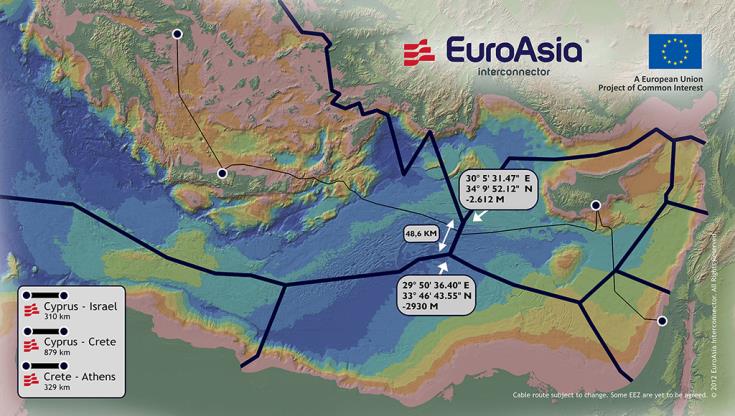 “The issue of EuroAsia Interconnector has not been finished, negotiations continue and we try to keep it as European project” Government Spokesman Prodromos Prodromou told the Athens News Agency – Macedonian News Agency, referring to a project aiming to link the power grids of Israel, Cyprus and Greece through a subsea cable, also passing from Crete.

Prodromou said the project was very important for Cyprus, not only for developing the electricity market but also for the island’s energy security. “The interconnection will be financed by EU funds and therefore it is feasible. There is a technical problem in decisions in Greece, we hope that a solution will be found which will not impair the ability to construct” the project, he added.

The European Commission labelled the EuroAsia Interconnector as a Project of Common Interest. The Greek Regulatory Authority for Energy (RAE) assigned the construction of the portion of the project linking Crete with Attica to the country’s Transmission System Operator ADMIE, which in turn founded “Ariadne-Interconnection”. RAE also offered the possibility to EuroAsia Interconnector to buy 39% of Ariadne’s shares by December 31, 2018, however this did not happen.

Asked about these developments, Prodromou said that what matters is to design the project in an acceptable manner and solve the difference between the Greek government and the European Commission.

By In Cyprus
Previous articleUnder pressure, May scrambles to win support for Brexit deal
Next articleNew US ambassador to present credentials on Monday