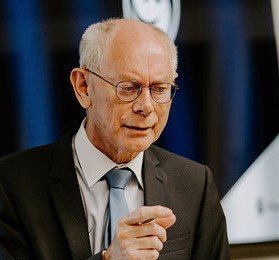 Phoenix Leaders recently welcomed Herman van Rompuy, former president of the European Council and former Prime Minister of Belgium, to The Club in Nicosia who spoke on the future for a post-Brexit Europe in a period increasingly characterised by growing political instability.

Van Rompuy argued that despite a wave of growing Euro-scepticism, support for EU membership has never been greater. “A continuously increasing majority of Europeans think that being a member of the EU is a good thing for their country. In a report of the European Council on Foreign relations, more  than half of Europeans think that there is a significant risk of the EU collapsing in this generation. According to the same survey, 92% of voters think they would be worse off if the EU were to burst. Europeans fear the collapse but do not hope for it. Fear is not the same as hope.”

He argued that there could be more support for pro-European policies than currently expected. “One of the explanations for the reluctance of national governments and parliaments to follow a pro-European course is the political instability at national level. The fragmentation of the national political landscapes, the volatility of the voters and the extremist drift have made it very difficult to govern in most Member States. It is not surprising that there are at least 15 minority governments in EU-28, within the euro area and beyond. How can Europe be sufficiently strong when too many Member States are weak.”

He also highlighted the role of social media in creating an environment of political instability. “Not only is there fake news and external manipulation, but there is also a trend towards individualisation. People are reached directly by social media without intermediate bodies and filters such as political and social organisations or traditional media. People hear one-sided messages and gradually only those they want to hear. All this reinforces the hardening of points of view and the polarisation. It sometimes leads to a blocked society and a blocked democracy.”

Despite the continued uncertainty created by the situation in Westminster, van Rompuy noted that Brexit had made the EU-27 more united and that together they “are further strengthening the eurozone and the Schengen area. It may be too slow, but nobody wants the way back. We will continue to conclude FTAs all over the world. The EU-27 is also in favour of a rules-based global trading system also without the UK as an EU member state. We are continuing to work towards a single digital and energy market. European industrial policy is certainly in the making in those sectors where we are all lagging behind globally. We know that there can be no climate policy without European enforceable targets and instruments.”

And he concluded: “historically, the European Union remains a success story. However, there are no lasting achievements in history. We have to work again and again to ensure that this is the case. We have to do it ourselves. Many want to undermine or destroy the Union and its sovereignty. Once again, we will prevent this from happening. I am sure of that. It is much more than just a vain hope.”

The presentation and Q&A session was followed by an opportunity for Members and guests of The Club to discuss their own views on the future of Europe with  van Rompuy individually at a drinks reception at The Club.