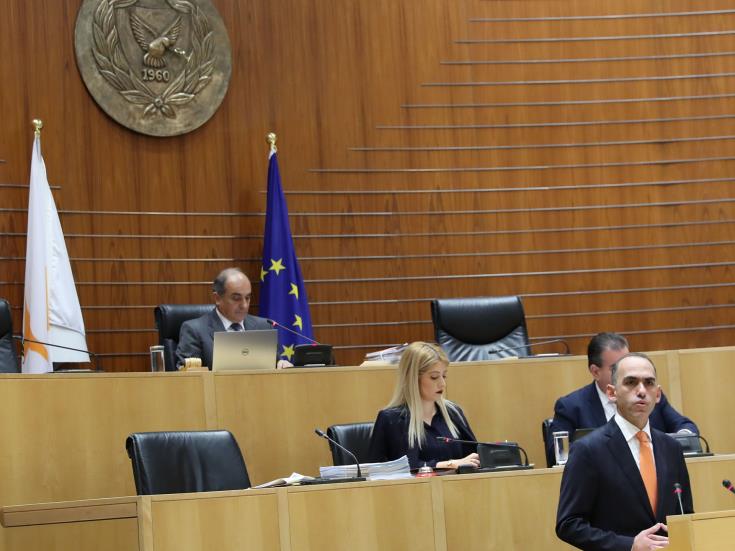 Finance Minister Harris Georgiades presented a 13-point reform agenda for the next period, stressing during his budget speech that reforms should be a national goal.

“Promoting reforms and changes in the structures and processes of the state and the economy should he a national goal,” Georgiades said addressing the Plenary of the House of Representatives in view of the parliamentary debate on the 2019 state budget.

Georgiades outlined a policy framework providing for 13 reforms, including the privatisation of the Cyprus Telecoms Company (Cyta), the Cyprus Stock Exchange and the State Lottery, the Local Administration Reform, the implementation of National Health Scheme and the reform in the insurance sector. He also referred the planned reform of the governance of the Central Bank of Cyprus.

“All of the aforementioned, comprise a concrete, ambitious but also achievable plan which, if implemented, will change our country,” he said, adding in this way we will maintain and broaden the growth momentum.”

“We should continue the reform effort. Change should not frighten because through change we safeguard prospect,” he added.

The Finance Ministry said that through careful fiscal management, the public finances have room for the promotion of measures to support people in need but also to promote tax breaks and incentives.

But he made clear that fiscal space is not unlimited. “We cannot do everything at once,” he said referring to pressures to increase public spending and the public wage bill.

“There are moves which can be made, and others which deviate from the boundaries of sustainability and rationality and will find us in the opposite side,” he said.

On the budget, Georgiades said public spending is up by €250 million to €7.9 billion, while projected revenue amount to €8.55 billion.

Budgeted tax breaks amount to €45 million, mainly through the reduction on the levy on interest income to 17% from the current 30%, he added.

He also referred to a retrospective bill approved by the Cabinet featuring a 14% VAT return on the purchase of housing plots and the reform on the vehicle taxation.

However, Georgiades voiced his disagreement over the reduction of fuel taxation, promoted by the ruling party Democratic Rally and opposition Democratic Party in the place of the reduction of the interest income levy, noting that “fuel tax in Cyprus is lower compared with the rest of Europe, while environmental reasons should be taken into account which do not allow the government to reduce this taxation.”

Furthermore, Georgiades said the banking sector has made progress and cited the reform of the legal framework to deal with non-performing laws, the sale of Cyprus Cooperative Bank to Hellenic Bank and the creation of a state-owned Asset Management Company, as well as the first NPL sales, which helped reduce total NPLs from €28 billion to €11 billion.

“However, we should realise that our banking system operates under a particularly demanding, European supervisory and regulatory framework and that pressures will be constant until the complete (the banking system’s) consolidation,” he stressed.

Moreover, Georgiades said Cyprus is committed to the completion of the EU Banking Union and other EU reforms as well as the widening of tax base and the exchange of information concerning tax issues.

“At the same time, we want to make it absolutely clear that we will safeguard our sovereign rights, the member-states’ rights in the field of taxation,” he stressed, adding that Cyprus is committed to tackling money laundering.

“We will clean up Cyprus’ name definitely and irreversibly from every stain of the past. And we will decisively back the EU initiatives and Action Plan to strengthen the framework against money laundering in the EU banking system,” he concluded.

By In Cyprus
Previous article“It’s been an honour,” says Merkel as German CDU picks new leader (video)
Next articleBank of Cyprus customers to receive Cobalt refunds in December