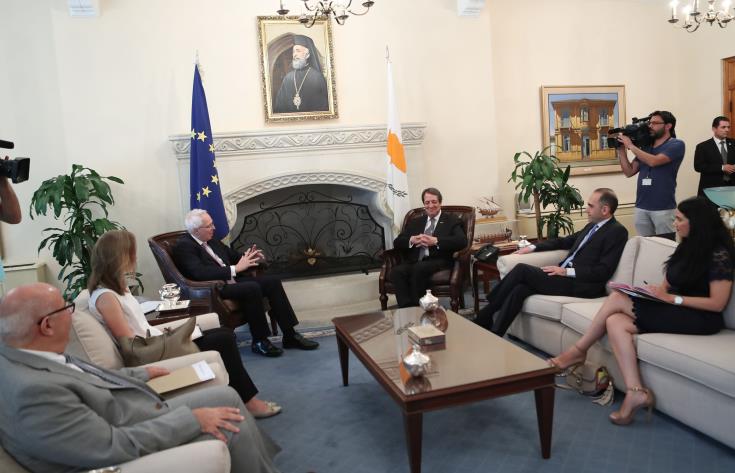 The Governor of the Development Bank of the Council of Europe (CEB) Rolf Wenzel said on Monday that the Bank was ready to extend its support to Cyprus’ economy, after a meeting with Cypriot President Nicos Anastasiades in Nicosia.

Wenzel told reporters after the meeting that he had  informed the President oabout the ongoing support of the Bank to the economy of Cyprus, adding that “we are ready to do more in the coming weeks and months.”

He said that the President briefed him on the efforts for the reunification of Cyprus and expressed his views on the prospects of continuing the negotiations on the Cyprus problem.

Wenzel also said that they discussed, among other issues, the economic situation in Europe and all the uncertainties, as well and matters relating to the upcoming European Summit at the end of June.

He added that he congratulated the President and the Minister of Finance on the strong recovery of the economy of Cyprus, due also to the increased inflow of tourists. Wenzel congratulated both men on strengthening the banking sector. He noted, however, that more needs to be done in order to address the issue of non- performing loans, pointing out that the Government is on a good path to address this issue.

Replying to a question, Wenzel said that the Bank was looking to undertake projects relating to the infrastructure sector, such as water supply, health and education and added that he was in discussions with several ministries of Cyprus.