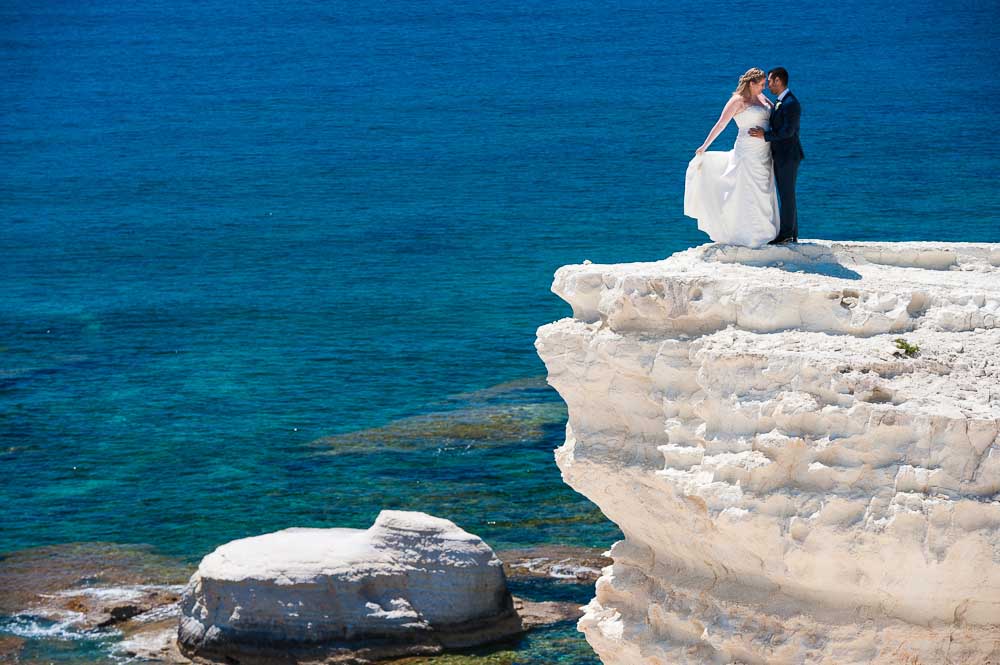 Tapping into the town’s magnificent seafront landscape, Limassol Municipality offers couples the opportunity to get married at locations as diverse as a seafront pier, the Limassol Zoo, or even the Mediaeval Castle in the old town centre.  Combining romantic atmosphere, the endless blue and open skies of the town’s coast, as well as organised wedding services, Limassol is gaining in popularity as a wedding location in recent years.
“The most important element that sets Limassol apart from other towns is the open space along the seafront; in combination with the sun, sea, the people of Limassol and our vibrant hotel and entertainment scene, Limassol is an ideal location for a wedding,” Christina Christou Director of Civil Weddings and Legal Services Officer at Limassol Municipality told The Cyprus Weekly.
In addition to civil wedding ceremonies at the Town Hall, couples that choose to get married in Limassol are offered a range of beautiful location options including: the Enaerios Pier, the pier at Molos promenade next to Limassol Marina, the Limassol Zoo, Mediaeval Castle Square, by the beach of Olympic Coast, the Municipal Gallery gardens, the Panos Solomonides Municipal Cultural Centre, and GSO Phytidio Sports Centre opposite the sea.
“Public buildings such as the former residence of the District Administrator in the Zoo Garden and the Mediaeval Castle are magnificent buildings. The recent addition of the pier by Limassol Marina as a wedding location also offers a beautiful setting. These venues have character that you cannot find in other towns,” commented Christina Christou.
According to Christou, the new wedding locations are already popular, despite the fact that Limassol Municipality has not yet started actively promoting its civil wedding services. For example, four wedding ceremonies have already taken place at Enaerios Pier: three in 2014 and one last year. The first wedding ceremony at the pier was that of a Nicosia-based Cypriot couple and attracted significant local media coverage.
In total, 270 civil weddings were performed by Limassol Municipality in 2013. This year has to the present seen a 7% increase in demand for civil weddings compared to the same period last year. Under the slogan ‘With Glamour & Class’, Limassol Municipality will soon be launching a marketing campaign to further tap into the wedding tourism segment.
“Our aim is to showcase Limassol and Cyprus in general in other countries, and mainly Russia, Ukraine, the UK, Israel and Lebanon, which are our main markets for civil weddings,” Christou said.
Public areas booked for a wedding ceremony are closed to the public during the ceremony and reception to offer privacy to the couple and their guests. Weddings organised by Limassol Municipality are usually smaller affairs, rather than the large traditional Cypriot weddings. The pier at Limassol Marina can host up to 150 guests, while weddings to the present have featured up to 100 guests.

The Municipality will require certain documents in order to book a civil ceremony, including passport, birth certificate and other certificates depending on the personal circumstances of the couple. The charges for a civil wedding are set by law and include:
·   €128 for a wedding notification in cases where the ceremony cannot take place earlier than within 15 days.
·   €282 to speed up the wedding date.
·   €14 to issue a true copy of the wedding certificate.
·   €130 if the wedding is performed during the weekend or outside municipal working hours.
In addition, couples that choose a location other than the Town Hall are charged an extra €500, which includes the following:
·   Gazebo with white curtains
·   50 chairs
·   White carpet
·   White tulle to decorate venue
·   2 tables
·   Champagne for the couple
·   A decorative miniature olive tree as a gift for the couple