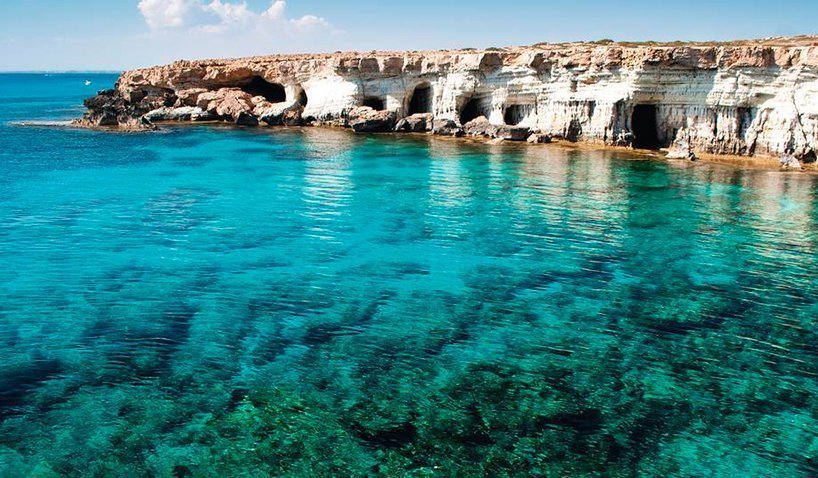 Golden sandy beaches abound on the eastern coast of Cyprus, in the free part of the Ammochostos (Famagusta) area. The popular holiday resorts of Ayia Napa and Paralimni-Protaras are a true paradise for lovers of the sea, water sports and nightlife. But there is more to the area. Inland, one can also admire a number of Byzantine and Frankish monuments and museums.

The magical landscape was an inspiration to Greek Nobel poet laureate, George Seferis. Sights worth seeing include the mediaeval monastery in the centre of Ayia Napa, the hundreds of windmills in the sprawling fields and the many Byzantine churches in the Paralimni-Protaras region and in surrounding villages.

The region is the main potato-producing area on the island and is known as Kokkinochoria, meaning “red soil villages”, thanks to the fertile red earth in which they are grown. The villages of this area are equally renowned for their folk poets and traditional song performers, who are regarded as the most inspired on the island.

The Agia Napa region is characterized by the lack of rivers, and the scarcity of cultivated land. Therefore the distribution of settlements by period corresponds exactly to the possibilities of the land. The discovery in 2004 of a new early site at Nissi Beach, on coastal formations of aeolianite, dating back to 8.500 – 10.500 B.C. marks the short presence of the first seafaring foragers on the island. The first Neolithic inhabitants, however, came much later and settled for a short period of time on a naturally protected hill-top near the coast called Tigani before moving inland. For five millennia the area was not populated, as no traces of the Chalcolithic, Bronze Age and Geometric periods have so far been located.

The Cypro-Archaic and Cypro-Classical remains were once again located on a small promontory right on the coast. We do not know much about these people, as the only remains we have are but a few fragments of terracotta figurines from an improvised sanctuary situated on the beach at the site of Makronisos. The Hellenistic period is well represented by the sanctuary of Aphrodite on the table-shaped hill referred to by Strabo and described by Ohnefalsch-Richter as well as by the results of the excavations at Makronisos. The burial customs are practically Greek and correspond to that of other cemeteries of the same periods all over Cyprus particularly Salamis and Pafos. The pottery found in tombs suggests contacts with foreign countries, especially the Greek eastern world including Syria and Anatolia, North Africa and Italy.

The Roman period was notable for the erection of a number of farmsteads resulting from the establishment of the Pax Romana. Strongholds such as Palio Chorko continued their existence but the economy of the region was from now on based on individual farms. Little is known about the organization of the region, but the existence of a major town is evident in the later part of the Roman period. Both Strabo and Ptolemaios refer to “Thronoi city and cape”. The remains of Thronoi were found at the site of Torno west of the present village. Thronoi was the most important settlement while some minor settlements like Ziyagin and Kaounin were related to it. The extensive water-works at the locality of FiIina could be considered as part of the activities of an organized community residing at Thronoi. A number of quarries in the region provide further evidence for the organization of the society and the specialization of labour.

Most of the major settlements of the Roman period continue their existence well into the Early Christian period. The most important settlement, however, of the Early Christian and Early Byzantine period is Katalymata. It seems that most of the population shifted here to this new site where no remains of the pagan past were present. The settlement was a flourishing one, judging from the remains. The site was in its turn abandoned during the Arab raids of the 7th century along with other minor sites.

The region was deserted for centuries and most likely only shepherds wandered about the pastures until the 14th century, when the Lusignans, attracted by the charm of the region, built the Agia Napa Monastery. Gradually but steadily some people came into the region shortly after the erection of the monastery, either as work force for the construction of the aqueduct or as suppliers for the monks. Many of them settled permanently around the monastery and developed into the community. The village of Agia Napa became a reality which continued down to the present day. A small community of farmers and fishermen grew to a town towards the end of the 20th century.

Protaras-Paralimni is situated on the southeastern fringe of Cyprus and has the blessing of the first sunrise in Europe. Paralimni, the main town, combines the advantages of a traditional village with the conveniences of a contemporary town and there is an air of timelessness in the Town Center.

Protaras, the tourist area, extends along the eastern coast of Paralimni and stretches for 10km from the district of ‘Kapparis’ to the location of ‘Konnos’. Hundreds of windmills grant its landscape a quaint, tranquil beauty. Fantastic beaches with crystal clear waters are found along this coast, most of them accredited with the prestigious Blue Flag status.

Fig Tree Bay is the most precious gem on this coastal tiara and is named after the solidary fig tree that has been planted here by eastern invaders in the 17th century. On the headland of the bay one can see the recently revealed, glass-covered Hellenistic tombs. The selection of watersports abounds at these beaches, ranging from skiing and paragliding to snorkeling and scuba diving and the boats wait on the piers to take you for unforgettable trips.

The lengthy seaside promenade is perfect for a sunset stroll or a leisurely bicycle ride offering at the same time the visitor the opportunity to explore further the area. Visit the harbors of Agia Triada and the picturesque Agios Nicolaos. Take a nature trail or one of the cycling paths and enjoy seamless views of the sea. Along them you’ll discover rare species of flora and fauna and little chapels will greet you betraying the orthodox faith of the place like Agioi Saranta which is set in a mountain cave and Agios Ioannis a little chapel hidden in a valley. The ascend of the 153-steps uphill leading to the chapel of Profitis Elias will definitely reward you with breathtaking views of Protaras.

Hotels, self-catering apartments, a wide range of restaurants, taverns, pubs and clubs are here to cater for the needs of even the most demanding tourist. Therefore, whether you choose to simply soak up the sun, explore the underwater world or wonder in the quaint streets of Paralimni while shopping; visit the byzantine church of Ayia Anna and theTraditional House or enjoy yourself in a club, once you are in Protaras-Paralimni a world of choices awaits you!

By In Cyprus
Previous articleCCB: Salami tactics are off the table
Next articleAndreas C. Chrysafis Studio