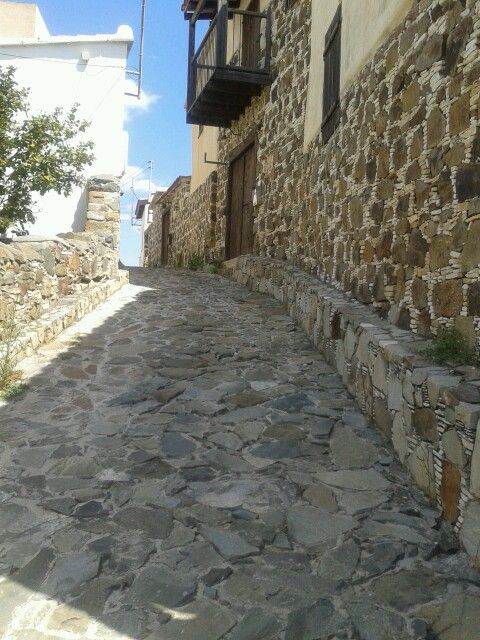 The Community of Kapedes is found roughly 25 km southerly of the city of Nicosia, at the foot of the mountains of Machera and in the street that leads to the monastery of Machera. It is a mountain village almost without any plains, apart from very small extents in the north side of the village, that’s why the properties of its residents are extended up to the village Margi, while in the south side of the village they reach up to the locality Kionia. The average altitude of the village is about 560 meters.

The landscape of the village is dismembered from the “argaki” of Saint Onoufrios, a tributary of river “Pidias”, as well as from tributaries of the river “Gialias” that cross the region.

From the geological point of view, in the administrative extent of the village, they dominate the handholds of the igneous cluster of Troodos, where “pytirioucha” grounds and “feochomata” were developed. The village accepts an average annual rainfall of about 480 millimeters.

During the old years in the region they were cultivated mainly the vines. Because of the low efficiency of the cultivation the residents have turned mainly to other technical professions. Minimal are the farmers and less the cattle-breeders.

Products that are cultivated are the olives, the almonds and very few cereals. The most area of the village is uncultivated.

The season where emperor of Rome was the Title 79-81AC it is reported that an explosion of a volcano at the mountain of Tyrant, destroyed the village with two other villages without reporting their names. We conclude however that the settlements are found in the northeastern side of Kapedes where exist ruins of the Roman season. This information it appears that it is not true, because the geologists that studied the rocks of the island exclude such a phenomenon and particularly during that season. Later, in 1464 is reported that the village of Kapedes was given as gift to Benedetto Vernazza.

Later, the Archimandrite Kyprianos, in his history that was published in 1788, reports that Kapedes, Metochi of the Abbey of Archangel, belong to a family, obviously descendants of Benedetto Vernazza, which abandoned him, perhaps because of the low incomes that they had from him.

The village of Kapedes existed at the period of the Ottoman domination and likely at the period of “Frangkokratias” and the “Venetokratias”. The Monastery of Macheras owned the region of the village, and some of the monks of the monastery were coming from this village.

Α) The village, as a Metochi of the Abbey of Archangel, was used for removal from this of ten monks, that being effervescent, did not follow the rules of the Abbey. Said, therefore, the remainder monks: “Pano stous deka pedes “, and with the passage of time remained the name, by removing the initial syllable de-kapedes, in the settlement in which it had been created.

B) A second version, says, that, in this region existed the stockyards of the Abbey. Obligatorily, the shepherds stayed there with their families. However, the shepherds caused such damages in the region that they named them “kakoi pedes”. They said therefore, those who were going to visit them: “Pao stous kakous pedes” that with the byway of time again became Kapedes.Certain supported on one of these versions, write the name of the village Kapaides instead of Kapedes.

C) The third version is related with the mines. This version says that the name of village emanated from the ” KAPAKIA” of the mines, that is, layers of metal, that abounds in the region. With the passage of time the name became Kapedes.

CULTURAL LIFE
The fury that possesses us to follow anything innovatory, anything foreign to the customs and the traditions, removes us permanently from our roots. Here however, the Community Council, the administration of the school and two associations THOI and P.A.O.K., undertook a regulating role with the various events that they organize, like the games at Easter, the religious events, the dances with their dancing groups and they have become the agents of the residents to keep them firmly with their roots and religion.

However, it does not stop here. The old building of the school has been changed and it functions as the Community Medical Center, which it visited every week by a governmental doctor who offers medical care to those who need it. Thus the old people, mainly, residents of the Community, receive their medical care without loosing time in the buses and the city hospitals. Also the room that is used for the meetings of the Community Council accommodates the Community Library, where people can visit it, borrow books or read books.

NATIONAL CONTRIBUTION
As all the villages, thus Kapedes gave their present in the fights of the island with their own contribution in fights and blood. At the duration of the fight for freedom 1955-59, the people from Kapedes were there. The arrests, the imprisonments, the tortures did not prevent them to accommodate the “Stavraeto tou Machera”, the days of his big chase and few days before the holocaust. It is here that he shaved his beard, removed the robes and wore again his honored guerrilla uniform. They were also involved in the events of 1963 and in the Turkish invasion in 1974.

By In Cyprus
Previous articleTrump urged Spain to ‘build wall’ across Sahara, says minister
Next articleMan arrested on suspicion of attempted rape