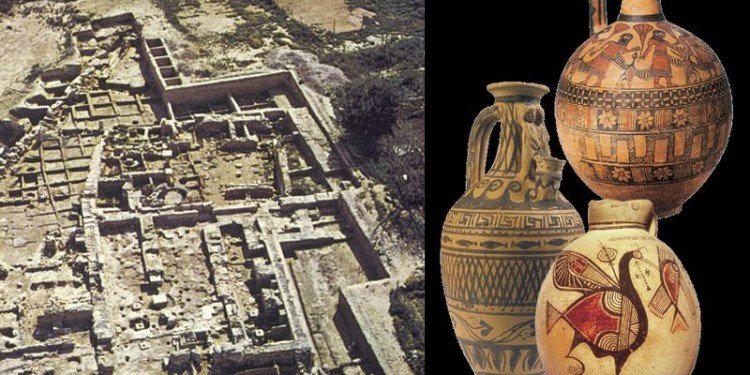 Historic Times: Geometric and Archaic Periods Two major developments marked the transition from the Prehistoric age to Historic periods – the first was political and the second technological. The first major development was the establishment of new city-kingdoms.

Up until the 11th century BC, all the large cities of the Late Bronze age had been destroyed by natural causes, possibly earthquakes. Folk tales that the new town swere created by heroes of the Trojan War on their return from the conflict correlate to historical facts, namely the last wave of Achaean Greek settlement, which led to the eventual hellenisation of Cyprus, with the adoption of Greek culture and language. From the 10th century BC onwards the ties between Cyprus and Greek islands such as Evia and Crete became particularly close.

The second major development was the use of iron in metallurgy, which marked the start of a new era, the Iron age. At first iron was used only in jewellery, but it gradually replaced copper in tool making. The Iron age includes the Geometric period (1050 – 750 BC), in view of the fact that geometrical motifs were mainly used in decorating pottery.

This period coincided with the arrival of the Phoenicians in Cyprus and their colonisation of the large coastal Mycenaean city of Kition. Typical Phoenician black-on-red colour pottery was introduced and later produced locally on the island.

The beginning of the next period, the Archaic period (750-480 BC), was marked by the subjugation of Cyprus to the Assyrians. During this period, the Cypriot city-kingdoms of Salamis, Kition, Amathous, Kourion, Idalion, Palaipafos, Marion, Soloi and Tamassos remained independent for as long as they were in a position to pay a subjugation tax to the Assyrian ruler.

After the rule of the Assyrian hegemony, the Egyptian Pharaoh Amasis took over Cyprus. Typical of this period were the strong Greek and eastern influences evident in all aspects of life, more so in art and religion.