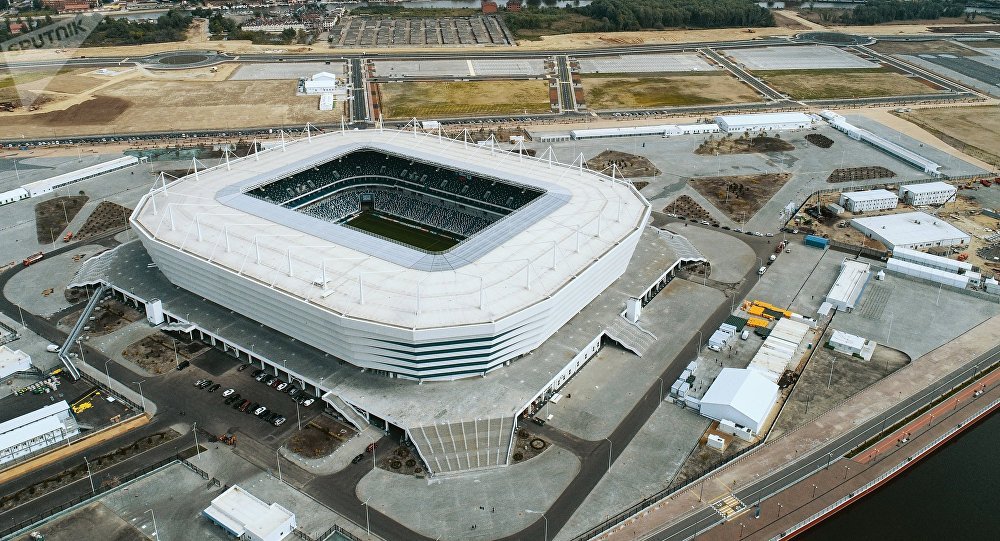 Nikita I. Zakharov leads the fan club for the soccer team in this leafy, slow-paced provincial city, and yet he keeps a cleareyed view of its place in the wider world of soccer. “We cannot really boast of soccer success,” he said mournfully. The team, Baltika, plays in a second-tier Russian league. In its 64-year history, it has won the championship once — in 1995, “the golden year!” exclaimed Zakharov — and came in second twice, in 1959 and 1961.

Its biggest win, it turns out, was not so much on the field as with a field. Rising out of a formerly undeveloped swampy area in the city, a gigantic, glistening $280 million stadium appeared this year, one of six new arenas Russia built for the World Cup.

It is a bumper crop of new stadiums that, even by World Cup standards, appear out of proportion with the small crowds drawn by local teams like Baltika, which will use the venues after the tournament.

Their construction, at a cumulative cost estimated at $11 billion along with related infrastructure, illustrates how sports, as with the oil and mining businesses, has become integral to how the Kremlin and Russia’s ultra-wealthy financiers, known as the oligarchs, do business together.

The lucrative deal in Kaliningrad, a Russian exclave between Lithuania and Poland, went to the company of Aras Agalarov, who is one of Russia’s wealthiest men. Agalarov also had a commercial relationship with Donald Trump, having partnered with him in 2013 to host the Miss Universe pageant in Moscow.

“The Agalarovs are very well connected, in Azerbaijan, in Russia and in the United States,” Shumanov said.

The stadium in Kaliningrad is among those that went to cities with no top-tier soccer team. In one instance, a stadium with 45,000 seats went up in Saransk, a city with a population of 297,000.

The designs of the new stadiums nod to local pride. In Kaliningrad and St. Petersburg, both port towns, the stadiums’ look hints at ships. Mastlike towers suspend the roofs. The flying-saucer-shaped Cosmos Arena appeared in Samara, a center of the space industry.

Kaliningrad’s residents have been scratching their heads over what to do with the stadium when the World Cup is over.

The 35,000-seat venue will host four tournament matches in June and then pass to team Baltika, which last year drew an average of 4,000 spectators to matches. These were low-key events, according to videos of the games, where tepid fans munched sesame seeds and watched their blue-and-white clad soccer heroes play and, sadly, often lose.

“There are just not so many soccer lovers here,” said Vadim Chaly, an associate professor of philosophy at Kaliningrad University, and an authority on Immanuel Kant, a city native from the time Kaliningrad was German and called Konigsberg.

Zoya Bondarenko, a clerk at a convenience store near the new stadium, found it less perplexing.

Her door overlooks 200 acres of packed sand in the filled-in swamp, with the white, maritime-themed stadium in the distance, looking like a beached cruise ship.

“The Forbes list is growing longer,” she said nonchalantly of the scene, and the businessmen making money here.

Anton A. Alikhanov, the regional governor, said in an interview that the stadium and related soccer spending will only benefit Kaliningrad. It helped pay for new ribbons of asphalt on roads, an airport upgrade and the filling of swampland.

“The island was a swamp where nothing but cattails grew,” he said. “If we hadn’t built a stadium, we would never have built anything there.”

And Alikhanov praised the work of Agalarov’s company, Crocus Group. Crocus, which won the contract in 2014, did not reply to a request for comment on the stadium work.

Adding to the perplexity is the fact that Kaliningrad already had a stadium.

Opened in 1900, it is one of the oldest soccer arenas in Europe. It was first named after German philanthropist Walter Simon, who donated money for its construction. As Simon was Jewish, the Nazis renamed it after a Nazi and it became Erich Koch Arena. Then the Soviets, who tried to scrub the region of its German past, renamed it again, to Baltika Stadium.

Refurbishing this stadium would have been far cheaper, critics say. But saving money on sports construction has not been the goal in recent years, according to a study by the Anti-Corruption Foundation, a group led by opposition politician Alexei Navalny.

It found that 19 of 24 major construction contracts for the 2014 Winter Olympics in Sochi went to companies with ties to senior officials, including a company led by a former judo sparring partner of President Vladimir Putin. Construction costs, on average, ran four times higher than initial estimates. Navalny’s group calculated that each Olympic event cost $510 million to prepare.

“Ideally, the Olympic venues should have been constructed only by experienced companies with the lowest price quotations and all necessary financial and operating resources,” the study said.