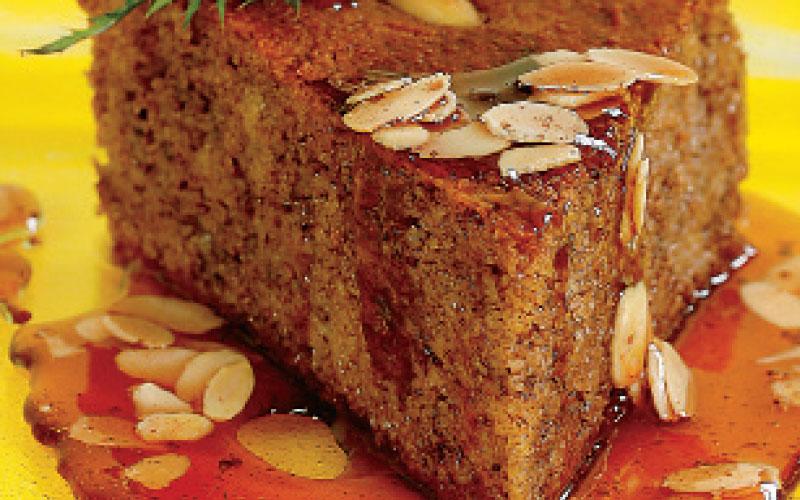 Grease and flour a 22cm diameter baking tray. Preheat the oven to 170°C.
Beat the egg yolks and 2/3 of the sugar with a mixer until they are frothy and white. In a second bowl, beat the egg whites with the rest of the sugar until they are a stiff meringue. Take ½ the meringue and stir into the mixture of the egg yolks to loosen. Then stir in the semolina, flour, vanilla and cocoa. Finally, add the remaining meringue, stirring gently and carefully, folding from bottom to top until it is smooth. Pour the mixture into the baking tray and bake the ravani in the oven for 20-25 minutes approximately. Remove from the oven and leave to cool completely.
Meanwhile prepare the syrup: Boil the water with the sugar, stirring until the sugar dissolves. Add the lemon and boil for 3 minutes. Pierce the ravani with a toothpick or a skewer several times and slowly pour over the warm syrup until it is all absorbed.
Before serving prepare the honey-Commandaria sauce: Put the almonds in a non-stick pan and stir on low heat until they begin to brown slightly. Add the honey and the Commandaria and stir well. When it has warmed through and thickened, remove from the heat. Serve the ravani in triangular pieces, accompanied with the sauce.

Tastes of Cyprus. “To Patriko” tavern in Tersefanou