Pork tenderloins with roquefort sauce and pears in wine 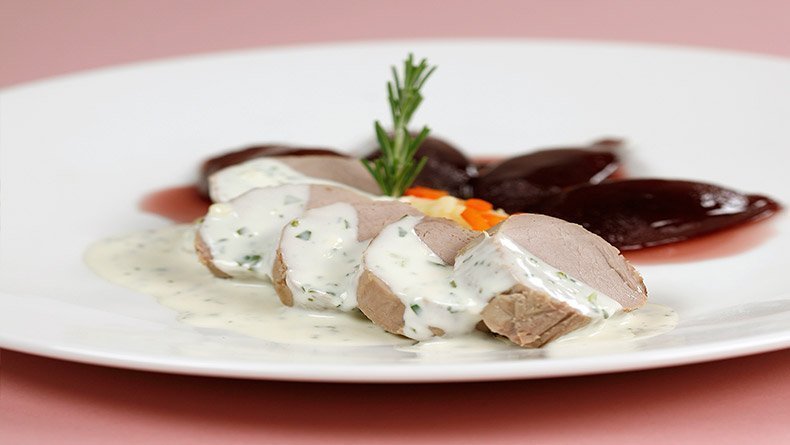 4 pork tenderloins (about 250gr each)

Prepare the pears first: Peel them off and with the special tool to remove their holes (drilling them from the bottom upwards). Put in a saucepan the wine, sugar, cinnamon and carnations and stir the mixture in the fire until the sugar melts. Then add the pears and when the wine is boiled, lower the heat and simmer until soft (depending on the pear variety and how mature it is). When they are ready, remove them from the saucepan with a ladle and simmer their syrup for about 10 minutes until they are tied. Cut the pears in quarters along and return them to the saucepan in their syrup.

Preheat the oven to 200 ° C. Add the tenderloins with some oil and salt them. Wrap them one by one without folding them with oven-wrapped cellophane or non-stick labels and then wrap them with aluminum foil. Spread them in a baking pan and bake for 35-40 minutes in the oven.

In the meantime, prepare the roquefot sauce: Melt the butter in a saucepan. Pour in the brandy and stir it. Immediately add the cream and let it boil. Lower the heat and boil for about 2 minutes until it ties and stir the cheese until it melts. Remove the pot from the fire and stir in the chives and a lot of freshly ground pepper (no salt is required because the cheese is salty) .Cut the tenderloins in washers and serve them on 4 dishes. Spread over the roquefort sauce and accompany them with pears and syrup and mashed potatoes.

By In Cyprus
Previous article
Trump, U.S. Congress careen toward partial government shutdown
Next article
Paphos mall does not have a business license, mayor claims