Upgrading of Evangelos Florakis base linked to defence cooperation with France, Defence Minister 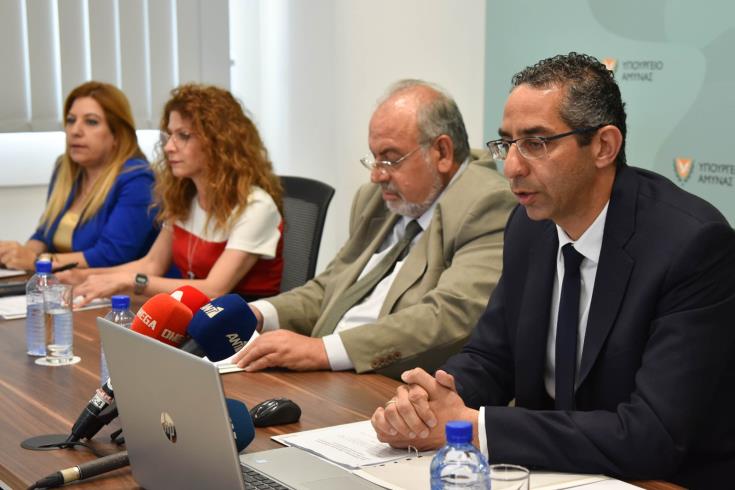 Cyprus’ upgraded role and position within the EU’s defence mechanisms as well as in the Eastern Mediterranean is a priority, Defence Minister of Cyprus Savvas Angelides has said. The Ministry considers extending the “Evangelos Florakis” naval base during the course of 2019, with Angelides confirming that this development is linked to the defence cooperation with France and Cyprus’ upgraded role as a bastion of stability.

Speaking on Wednesday during a press conference, in Nicosia, Angelides took stock of his Ministry’s activities from March 2018 until May 2019. Referring to Turkish illegal actions in Cyprus’ exclusive economic zone, he said that his Ministry is handling the situation, albeit not in the way Turkey might wanted, with an escalation. With composure and prudence, the government lays emphasis on coordinated action in order to take all the necessary political and legal measures to address these challenges, the Minister underlined.

Asked about the US arms embargo on Cyprus he said that Nicosia intends the embargo to be lifted. Once the embargo is over, an obstacle in upgrading relations with the US will be removed, he added. According to the Minister, the Republic of Cyprus orients itself in other areas of cooperation.

Replying to a relevant question, the Minister said that the main aim in 2019 as regards the naval base is its extension. He confirmed that the issue is related to the recent defence cooperation agreement with France. Cyprus as an EU member state is actively taking part in PESCO and its priority is to upgrade its infrastructure, he said, the Minister of Defence did not preclude, however, the possibility of cooperating with other countries as well.

Concerning his Ministry, Angelides also presented the six main pillars of activity that form the basis for the Ministry’s strategic pursuits. The first pillar is about enhancing transnational ties and strengthening defense cooperation relationships, the second pillar aims at strengthening the operational capacity of the National Guard and the third is about reforming, reorganizing and enhancing the extrovert orientation of the Ministry of Defence and of the National Guard.

The Minister went on by saying that the fourth pillar is about the efficient use of financial resources and strengthening of the budget, while the fifth concerns the simplification and improvement of the legislative and regulatory framework. The sixth pillar concerns finally human resources.

Outlining his Ministry’s priorities, Angelides talked about the promotion of regional cooperation, in a way which ensures that Cyprus plays a significant role in efforts to enhance security, peace and stability in the Eastern Mediterranean. He referred, among others, to trilateral cooperation schemes together with Greece and regional countries, such as Israel and Egypt, as well as to the consolidation of bilateral relations with important countries, such as France, Israel, Egypt, Italy, Germany, the UK, Ireland, the Netherlands, Jordan and Lebanon.

With regard to upgrading relations with the US, the Minister said that the Republic of Cyprus will install soon a Defense Attaché in Washington. There are also provisions to enhance relations with the EU, support the Common Defence Policy and become more involved in defence research and innovation matters.

“The governments’ calculated moves during the last few years enhanced Cyprus’ role in the EU and turned it into a credible stability factor, a regional pillar for cooperation and a contributor of security in the region,” Angelides underlined.

The Minister also referred to the Joint Rescue and Coordination Center (JRCC) of the Republic of Cyprus, noting that it is being acknowledged as one of the region’s modern centers. The aim is to continue enhancing this role, he said and pointed to a memorandum of cooperation with Egypt, as well as the extension of the current naval S&R agreement with Greece.

Speaking about the National Guard, the Minister of Defence said that the main aim is for the force to become flexible, well-trained and reliable, equipped with modern technology and a modern structure.

The Minister also said that reforms underway aim to put citizens at the center, cut red tape and simplify procedures. Among others, he said that the Defence Ministry has relocated to a new building and recruiting services are simplifying procedures. He also referred to a new mobile application that is available for recruits, reservists, the military personnel and the public in general, in order to provide timely information.

As regards budget implementation, Angelides said finally that the rate for 2018 stands at 95% or around €376 mln.