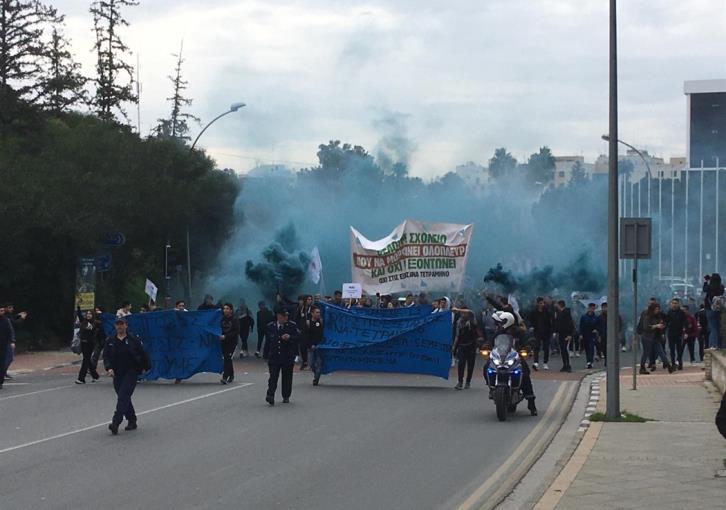 Pupils took to the streets once again this morning in Nicosia to demonstrate against four-monthly exams.

The crowd marched from Athalassas Avenue to the Presidential Palace, where President of the pupil’s federation PSEM Yiannis Lapithios gave a speech saying that “with today’s protest students want the Ministry to hear loud and clear that pupils want a school that offers all-round education, not an exam centre.”

“We condemn the Ministry’s treatment of our protests — in the last three years we have abstained from classes, collected signatures, demonstrated outside the House of Representatives and the Ministry of Education, have submitted our arguments to the Ministry and the Pupil Assessment Committee, only to be met with dismissal.”

“We want a school that encourages critical thinking and not one that is fixated on grades.”

“PSEM had also submitted a counter-proposal,” he continued, “to conduct 90-minute tests instead of four-monthly exams to reduce stress and competition among students, which was never considered by the Ministry.”

Lapithios said that hundreds of parents and teachers support their purpose, and lambasted the Ministry for its threats and intimidation towards pupils that participated in protests.

Pupil representatives who met at the Presidential Palace with Deputy Minister to the President Vasilis Palmas submitted to him their positions.

Palmas encouraged the pupils to continue fighting for their demands telling them that “in democratic countries like Cyprus citizens of every age have the right to protest.”

Regarding the issue at hand, Palmas told pupils that they need to realise that the government “is trying to implement some changes for the benefit of the students. We are evaluating the issue of the four-monthly exams, and once our review is complete we will issue our final statement on this matter as well as other issues regarding the education system.”