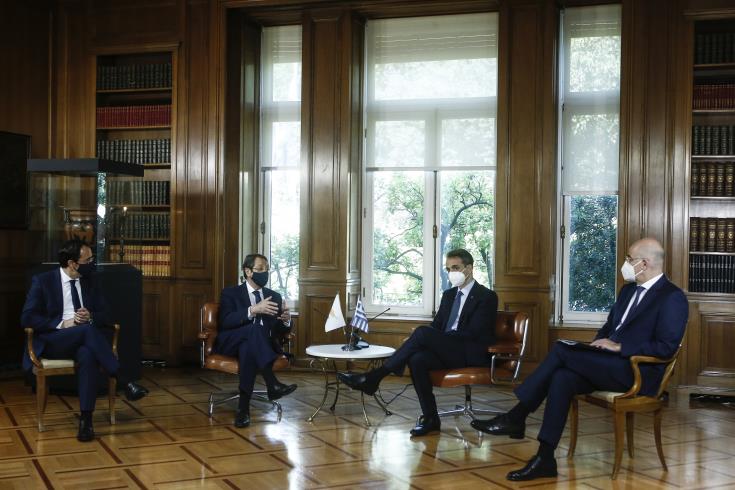 Greek Prime Minister Kyriakos Mitsotakis and President of the Republic of Cyprus Nicos Anastasiades, who met on Wednesday in Athens, to coordinate action ahead of an informal five party-summit on the Cyprus Issue to be held in Geneva in late April, underlined that the framework for the solution of the Cyprus Problem is determined by UN decisions and resolutions.

In his statements, President Anastasiades said that the forthcoming informal five-party summit represents an important effort that will allow the UN Secretary-General to explore whether “a common ground for dialogue of the solution of a problem caused by the Turkish invasion and occupation of the Cypriot territory” exists.

“The framework of the negotiation is determined by UN Resolutions, decisions of the Security Council, and EU values and principles. They were defined on 25 November 2009 in Berlin, in the presence of the UN Secretary-General and Mr Akinci”, Anastasiades noted.

President of the Republic of Cyprus underlined that the efforts for resolving the Cyprus problem aim to find a way “for the two communities to feel safe and to guarantee the human rights of all the people of Cyprus.”.

“The evolution of the Republic of Cyprus must create a viable and functional state, without guarantees and foreign troops – and mainly without any dependencies from third parties”, Anastasiades said. Despite Greece’s and Cyprus’ different role in the negotiation process, the two states’ positions coincide and Greece could play an important role as regards the issues of security and guarantees, Anastasiades concluded.

On his part, Greek Prime Minister Kyriakos Mitsotakis said that Athens and Nicosia cooperate their action in view of the forthcoming five-party in Geneva, which will be held under the auspices of the UN Secretary-General.

“The framework is completely clear. It is based on the previous UN resolutions, and the solution can only be based on the bizonal bicommunal federation, with one sovereignty, one nationality and one international personality; and of course, with the withdrawal of the occupation troops and the abolition of the anachronistic system of guarantees,” he said, adding that this “is is a very clear starting point.”

“We will attend discussions with goodwill in order to find a just, functional and viable solution for the sake of all Cypriots, Greek-Cypriots and Turkish-Cypriots”, Mitsotakis concluded.