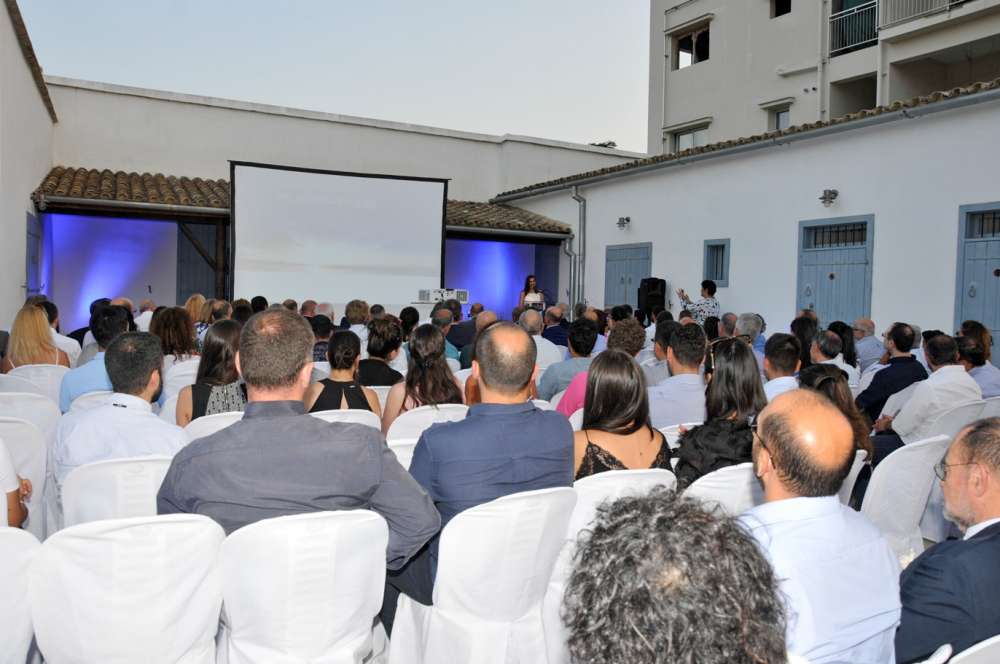 Larnaca Municipality earlier this week organised an event in Ancient Kition under the auspices of Deputy Minister for Shipping to officially announce the success of the MaRITeC-X/CMMI project proposal and to provide more information to the public about the Cyprus Marine and Maritime Institute (CMMI).

The CMMI which will be based in Larnaca will be an independent, international, scientific and business Centre of Excellence for Marine and Maritime activities.

It will carry out research, technological development and innovation activities (RTDI) to provide practical solutions to the challenges that the marine and maritime industry, and society, face or will face in the future.

The proposal for the creation of the CMMI was submitted to the European Commission in November 2018 under the HORIZON 2020 Programme, Spreading Excellence and Widening Participation Call.

Following a very competitive procedure the proposal came third among 208 proposals at EU level and it will be awarded €30 million funding.

Larnaca Mayor Andreas Vyras underlined the continuous efforts of the Municipality towards the materialization of this ground-breaking project which is aligned with the Municipality’s Strategy “Larnaca, Blue City”.

The latter aims at transforming Larnaca into a Regional Blue Economy, Education, Training and Research Centre and at promoting the Integrated Maritime Policy of the EU.

In this context, Vyras stressed the role of this centre in re-engineering the marine and maritime RTDI and entrepreneurship ecosystem and in supporting the socio-economic transformation of the island.

Moreover, he expressed the Municipality’s commitment and support to such initiatives with significant growth perspectives for the city and the country overall.

Finally, he thanked the project partners and all the stakeholders for their invaluable contribution and support to this ambitious endeavour.

Shipping Deputy Minister  Natasa Pilides congratulated first all the project partners for the success of the CMMI proposal. Pilides then described the strategic advantages of Cyprus, highlighting the important position of the Cypriot shipping at European and global levels.

She stressed that the development of RTDI activities is key to the sustainability and growth of the Cyprus maritime cluster, advocating that this Centre of Excellence would perform such activities and boost entrepreneurship by promoting closer cooperation and synergies between the maritime industry and the academic community at a global level.

In closing her speech, Pilides expressed her full support to this project, as it is expected to have multiple growth benefits for the country.

The keynote speaker of the event, the MIT Professor Nicholas Makris  explained the importance of marine engineering in tackling the challenges people were facing in relation to the sea. A particular modern challenge on which Prof. Makris focused, is the melting of ice and the subsequent rise of the sea level –due to the climate change -, an alarming phenomenon that already affects and is expected to affect even more in the future the coastal cities and their populations.

Addressing this challenge has already been included in the UN agenda and possible solutions are examined in collaboration with marine engineers worldwide. According to Prof. Makris, one such viable solution is the construction of sustainable floating cities. He then explained how these cities will operate, underlining their low ecological footprint and concluded his speech by highlighting the contribution of marine engineering to discovering and implementing solutions that will ensure and improve people’s lives.

Then, the Director of the Southampton Marine and Maritime Institute (SMMI), Professor Damon Teagle took the floor and described the mission of SMMI, its areas of activity and the research it conducts. In addition, he presented the challenges that the global marine and maritime industry is currently facing and will continue to face in the future, placing particular emphasis on the need for the reduction of greenhouse gas emissions from ships and for the implementation of more environmentally friendly solutions.

Professor Teagle also analysed the technological trends that currently prevail and are expected to shape the future of shipping, such as the use of robots, autonomous systems, big data analytics and cyber-security.

The last speaker of the event and representative of the Municipality of Larnaca, Andreas Karakatsanis, presented the plan for the establishment of the Cyprus Marine and Maritime Institute, explaining the vision and objectives of the Centre, its fields of activities and areas of expertise.

Furthermore, he described the legal nature of the Centre, its organisational structure as well as the infrastructure that will be created for CMMI.

Karakatsanis also provided a timetable according to which CMMI is expected to achieve full sustainability by the end of 2024. Furthermore, he pointed out that the Centre will develop synergies with the Larnaca and Limassol Blue Clusters in support of the Blue Economy.

Finally, he thanked all the stakeholders for their significant contribution to the project and stressed that CMMI would be open to collaborations that promote Blue Growth.