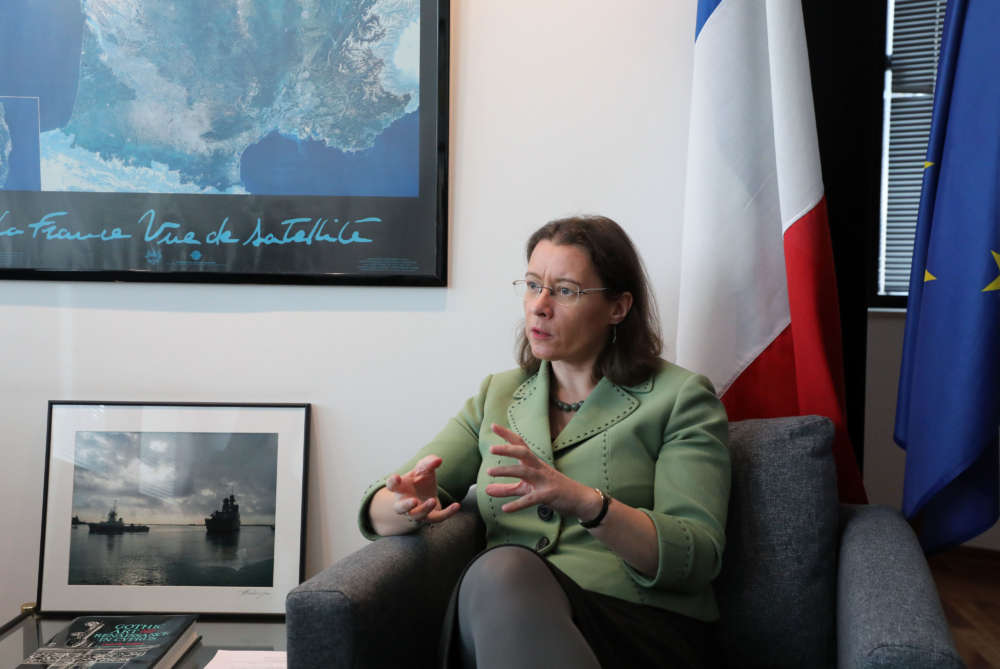 France’s  Charles De Gaulle Aircraft Carrier will call at Limassol port at the end of February, before the end of its mission in the Eastern Mediterranean, where it arrives at the end of January, Ambassador of France to Cyprus Isabelle Dumont has told the Cyprus News Agency.

Limassol is the only port that the aircraft carrier will be visiting during this mission and this shows the very strong relationship between France and Cyprus, she added.

The Ambassador noted that the settlement of the issues that have come up due to Tukey’s stance in the Eastern Mediterranean need to be political, while referring to the EU measures against Ankara, she noted that “we support Cyprus in this because we think that it seems that it is the only way to get Turkey to step back and this is our objective. Our objective is not to put more and more sanctions against Turkey but to have Turkey respect the international law,” she said.

Dumont noted that the Charles De Gaulle mission in the region has to do with the fighting of terrorism in Syria and Iraq. “It goes along with the permanent naval French presence in the Eastern Mediterranean and demonstrates the will of France to act as a stabilizing factor in the region,” she said.

While the Aircraft Carrier group will be working on this operation, it will also be carrying training exercises with Cypriot marine and air forces, she added.

Asked about the continuing illegal drilling operations of Turkey in the Eastern Mediterranean, where Turkish drillship Yavuz has been dispatched to drill in block 8 of Cyprus’ EEZ, Dumont said that “the French position is very clearly in favour of international law. What Turkey is doing in the EEZ of Cyprus is contrary to international law,” she noted, expressing full agreement with the Cypriot government’s position that the solution to this issue can only be political. We have expressed our profound preoccupation with what is happening and the acts of Turkey. France has been constantly reaffirming its commitment to the sovereignty of Cyprus including its EEZ, the French Ambassador said.

To a question about the Memorandum of Understanding signed between Turkey and Libya, she described this as a “pseudo-agreement”, adding that “we do condemn it as it is disrespectful of international law. What matters is to get to a solution of the Libyan problem and this is something that we are working on with our partners from the EU and others. France is taking an important part in it,” she stressed, adding that “what we have been pursuing and supporting is the respect of international law and we always call on Turkey to respect international law and the law of the sea.”

Moreover, the Ambassador expressed France’s interest in joining the East Med Gas Forum whose Foundation Charter was signed earlier this month in Cairo by Egypt, Cyprus, Greece, Israel, Italy, Jordan and Palestine. “We think that the East Med pipeline is a very interesting initiative. The aim of the EU is to diversify its origins of gas supply and therefore this initiative could be part of such a goal that we should all have together,” Dumont noted.

Asked about the mission of the Charles De Gaulle Aircraft Carrier in the Eastern Mediterranean, Dumοnt said that “the Aircraft Carrier is coming in just a few days to the Eastern Mediterranean. The goal of its mission is to stabilize the region, and it takes place in the framework of the international coalition against Daesh. So, this is about Syria and Iraq. By the end of its mission Charles De Gaulle will make a port call in Limassol which shows the very strong relationship that we have between France and Cyprus.”

Dumont said that the mission of the French Aircraft Career has four objectives of this mission. “The first is to secure and control the Mediterranean region, the second is to reduce the destabilization in this area, the third is to fight against Jihad terrorism and last but no least is to ensure the freedom of action and navigation in the Euro Mediterranean region,” she added.

The Ambassador said that “the mission is taking place in the framework of operation Chammal which is the French part of the international coalition against Daesh in Syria and Iraq that started in 2014. The Charles De Gaulle will stay in the region for a few weeks and is accompanied by ships from Spain, Portugal, Belgium, Netherlands, Germany and Greece.”

“At the end of February Charles De Gaulle will pay a port call in Limassol and this will be its only port call during its stay in the region and I think this can be taken as a symbolic sign of the excellent relationship that we have between France and Cyprus. Moreover, while it will be working on this Chammal operation, Charles De Gaulle will also be carrying training exercises with Cypriot marine and air forces,” she added.

Asked about the use of the Evangelos Florakis naval base in Mari in southern coastal Cyprus by the French navy, something for which Cyprus and France have signed a letter of intent, Dumont said that “we are still working on this. The idea is to enlarge this Cypriot naval base with the support of France and we are still in the process of discussing that,” she noted.

Invited to comment on the fact that despite calls by the international community, Turkey continues its illegal drilling operations in the Eastern Mediterranean, and has dispatched drillship Yavuz in block 8 of Cyprus’ EEZ, Dumont said that “the actions of Turkey in the region are very concerning to us. We have expressed very clearly the opposition of France on that, altogether with the EU and with other partners also. I am referring to the Declaration of the 8th of January after the Cairo meeting. The French position is very clearly in favour of the international law. What Turkey is doing in the EEZ of Cyprus is contrary to the international law and this is why we got to the idea of having EU sanctions to stop those actions. And I think we have a very clear agreement with the Cypriot authorities that the solution can only be political,” she added.

She went on to say that “we have expressed our profound pre-occupation about what is happening and the acts of Turkey. France has been constantly reaffirming its commitment to the sovereignty of Cyprus including its EEZ.  And this is something that we will continue to do,” she said, adding that the position of France has been conveyed to Turkey both during bilateral talks and publicly.

Asked about the EU measures against Turkey due to its illegal drilling and activities in the EEZ of the Republic of Cyprus, Dumont said that “we are clearly supporting Cyprus. I personally have discussions here with the authorities on that. As you know these measures are being negotiated in Brussels. It takes a little time, which is usual, to negotiate such things. But the sanctions are not a goal by themselves,” she added.  She went on to say that “when you get to sanctions it means that a negotiated settlement has not been reached” and that this is not something pleasant.

Asked about France’s position on the Memorandum of Understanding for the delimitation of maritime jurisdiction areas signed between Turkey and Libya, the Ambassador said that France’s position on this is quite clear and has been made clear in a statement by the Ministers of Egypt, Greece, Cyprus, France and Italy when they met in Cairo. “They had a very strong statement. We do condemn this agreement that is disrespectful of international law. What matters is to get to a solution of the Libyan crisis and this something that we are working on with our partners from the EU and others and France is taking an important part in it,” she added.

Asked about the East Med pipeline project and the signing of the East Med Gas Forum Foundation Charter earlier this month by Egypt, Cyprus, Greece, Israel, Italy, Jordan and Palestine, the Ambassador said that “this is a very interesting Forum that France would be happy to join. We are very much in favour of those discussions that have been taking place because anything that brings the region together is important in our view. Talking specifically about the East Med pipeline we think that it is a very interesting initiative. The aim of the EU is to diversify its origins of gas supply and therefore this initiative could be part of such a goal that we should all have together.”

To a question about the UN peacekeeping force in Cyprus (UNFICYP), whose mandate is expected to be renewed at the end of January by the UN Security Council, Dumont said that France supports very much UNFICYP’s work and its remaining on the island.

“We do think that they make a tremendous work. They are preventing a lot of incidents. So, they are actually very useful. They are useful for the dialogue between the communities and we do support very much what they do. Therefore, it is very important that the UN resolution will renew the mandate of UNFICYP, France lends its support to the renewal of the mandate and we have a very close dialogue with the authorities of Cyprus on that,” she noted.

With regard to the Cyprus problem, Dumont said that the people of Cyprus deserve to move on, they deserve to get to a solution. “It’s not good for anyone to stay in a stalled situation and you cannot really project your future, the future of your kids on a divided island. It would really be better for all Cypriots on both sides to get reunited. So, France supports the dialogue. It is not an easy task but it is not that difficult,” she noted.

Dumont said that the whole thing is about political will and I think maybe all of us should stop talking about the Cyprus problem and rather talk about a Cyprus solution. This may start affect the mentality of people, to believe that a solution is possible. For France a solution is possible,” she stressed.

Asked about the bilateral relations between France and Cyprus, Dumont said they are at a very high level but you should always aim at doing better. “There is a very high level of confidence between the two countries but we can always do better. There are a lot of areas where we can do better. For example, I’ve been discussing that with several members of the government of Cyprus and we agree that we should push at a higher level the exchange of people between the two countries,” she noted.

“Increasing tourism on both directions is part of the work we have to conduct together. We have been working already a lot with Deputy Minister for Tourism Savvas Perdios”, she added.

Cyprus has been divided since, 1974, when Turkish troops invaded and occupied 37% of its territory.