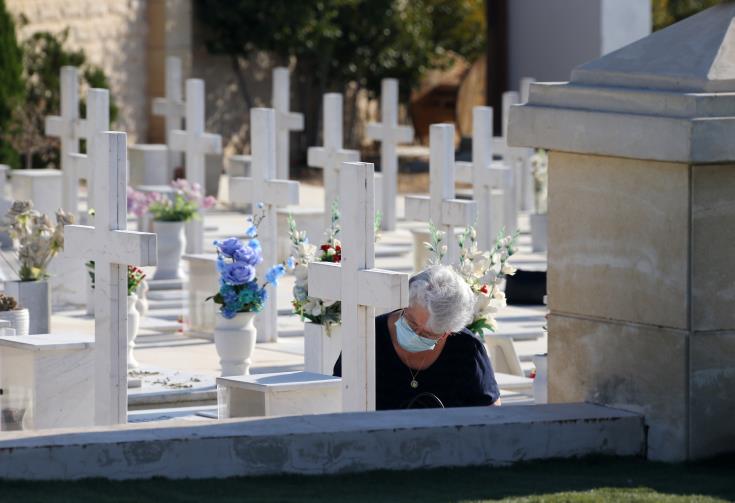 Nearly half a century after the 1974 Turkish invasion the state today gathered once again at the Makedonitissa Tomb, the military cemetary in Nicosia, to commemorate all those who lost their lives and all those who are still missing.

The memorial service was attended by the President of Cyprus Nicos Anastasiades, Defense Minister Charalampos Petrides, Greek Defense Minister Nikolaos Panagiotopoulos and the heads of the Army Forces of the Cyprus and Greece, Lieutenant General Demokritos Zervakis and General Constantinos Floros.

Other officials and citizens also paid their respects. Wreaths were laid and the National Anthem was heard.

President Anastasiades in a twitter post said that Turkey`s invasion of Cyprus in July 1974 continues to be a provocation of the basic principles of the international community and that we continue our struggle focused on the international law.

The Ministers of Defense of the two countries made statements to the press following the memorial service and noted the enhancement of the bilateral relation and the fact that Cyprus and Greece are pillars of stability in the region.

Cyprus` Minister Charalampos Petrides said that today we pay tribute to our heroes who lost their lives for the freedom of Cyprus and to all those whose faith remains unknown. He said that we will keep on fighting until our country is reunited and the foreign invasion is terminated.

The Minister pointed out that today Cyprus is faced with even bigger challenges as Turkey is putting forward new provocative claims in our exclusive economic zone and in Famagusta , adding that these challenges require unity and consensus. He expressed Cyprus gratitude for Greece`s ongoing support saying that the presence today of his counterpart and the Head of the army of Greece shows the enduring support.

The Greek Minister said that today showing the utmost respect we commemorate our heroes who sacrificed their lives defending Cyprus during the Turkish invasion and pointed out the symbolism in his presence today as well the presence of General Floros. He said that Greece is always by Cyprus` side and that the bilateral relation is strong.

Panagiotopoulos said that Greece is together with Cyprus in the struggle for a just and viable solution that will terminate the invasion and will safeguard Cyprus integrity and sovereignty, a solution that wil not deviate from the international law.
He referred to the bilateral defense cooperation saying that this relation will be enhanced for the benefit of the strategic ties between the two countries. The Minister also said that this cooperation will be enlarged with the development of new regional cooperation relations being factors of stability and security.

He also praised the presence of the Hellenic Force in Cyprus (ELDYK) saying that it shows with the most emblematic manner Greece`s alliance towards any threats and for safeguarding our rights.