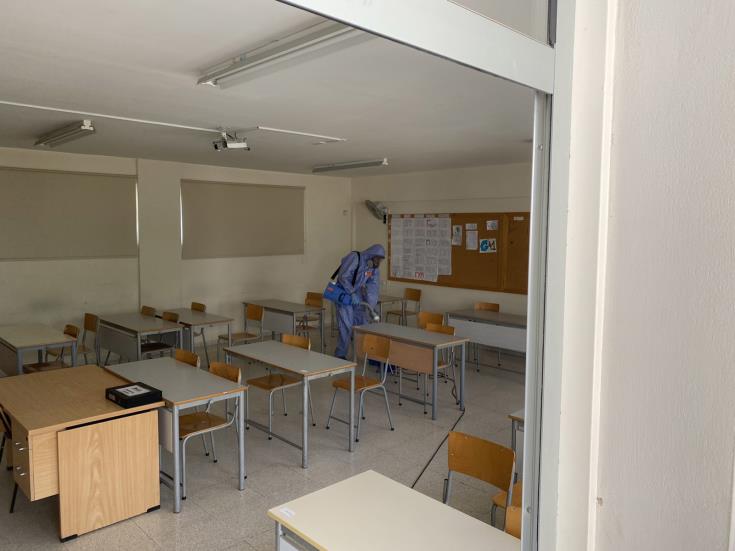 Aradippou upper secondary school (lyceum) where two final year pupils tested positive for coronavirus is being disinfected on Sunday so that it can reopen tomorrow, CNA reports.

The 35 contacts of the two pupils are meanwhile self-isolating for 14 days, the news agency added.

Pavlos Demetriades, chairman of the Aradippou School Board said that the whole school was being disinfected today.

“It appears that the two cases pre-existed, because since the school opened (on Monday) for final year pupils all the protocols of the Health Ministry were diligently and strictly adhered to strictly,” he told CNA.

Demetriades said he had spoken to the head teacher of the school from the first day and closely monitored compliance with the decrees by pupils and teachers.

The school will open in line with the protocols he added.

Asked whether others schools in the Aradippou area will be disinfected,  he said that there are currently no such plans but all will depend on diagnostic tests. Most of the pupils at the lyceum are from Aradippou, although some are from other communities, he added.

Citing sources, CNA said that the samples were taken on Thursday among 133 pupils, teachers, a guard and administrative staff.

Tracing of the contacts of the two pupils who tested positive involved 35 individuals who are in self isolation for 14 days.

A total of 154 pupils were due to attend class at the lyceum in two groups — of 81 and of 73, CNA said. But in fact only 70 from the first group and 55 from the second group actually went, it added.

The Education and Health Ministries are carrying out tests among pupils, teachers and other staff in the island’s schools in the run up to the planned reopening of primary and lower secondary schools on Thursday.

About one in three of pupils and staff will be tested over several weeks.

In the wake of yesterday’s announcement that two of the four positive cases were in Aradippou, they have also decided that all pupils of all levels in the community be tested and have urged parents and guardians to give their consent.

Prodromou told CyBC TV last night that authorities were on alert following yesterday’s news, but said there was no reason for concern.

However, the parents’ association says schools with positive cases — either among pupils or staff — should remain closed and teaching offered through tele-education.

The association expressed concern, highlighting the importance of protecting the health of final year pupils and avoiding stress and distractions in the run-up to their  university entrance exams.

They have also urged final year pupils to behave responsibly and adhere to social distancing rules.