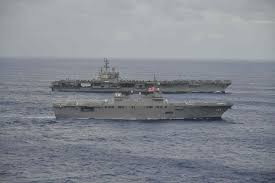 North Korea said it is searching for the body of South Korean official killed by its troops, but warned that South Korean naval operations in the area threatened to raise tensions.

Seoul then urged Pyongyang to further investigate the fatal shooting and suggested it could be a joint probe by the two sides.

South Korea’s military has accused the North’s soldiers of killing the man, dousing his body in fuel and setting it on fire near the sea border.

North Korean state news agency KCNA said that the country’s authorities were considering ways to hand over the body to the South if it is found.

South Korea has mobilised 39 vessels, including 16 naval ships, and six aircraft for the search, which continued tody despite the North Korean complaints.

North Korea begun its own search operation to recover the body.

By Constantinos Tsintas
Previous article
Authorities keep steady pace on Covid checks, more than a thousand on weekend
Next article
Out in ‘nature’-Prince William and family join legendary Attenborough