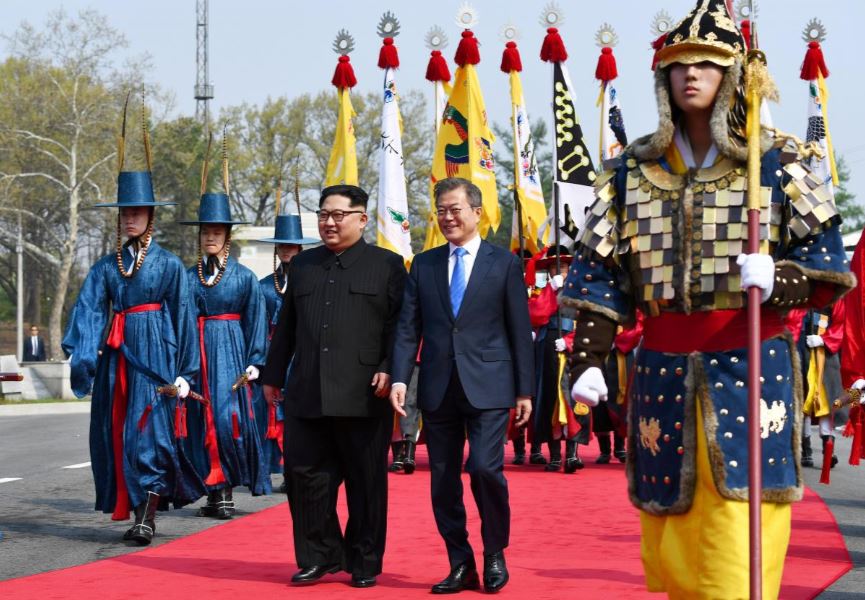 Kim became the first North Korean leader since the 1950-53 Korean War to set foot in South Korea, stepping over a concrete curb marking the border at the truce village of Panmunjom to shake hands with his counterpart. Scenes of Moon and Kim joking and walking together marked a striking contrast to last year’s barrage of North Korean missile tests and its largest ever nuclear test that led to sweeping international sanctions and fears of a fresh conflict on the Korean peninsula.

The dramatic meeting comes weeks before Kim is due to meet U.S. President Donald Trump to discuss denuclearizing the Korean peninsula. “We are at a starting line today, where a new history of peace, prosperity and inter-Korean relations is being written,” Kim said before the two Korean leaders and top aides began talks.

The two leaders discussed denuclearization and permanent peace on the Korean peninsula during their morning session, and are expected to sign a joint declaration after they reconvene Friday afternoon, a South Korean official told reporters. During their private meeting, Kim told Moon he came to the summit to end the history of conflict and joked he was sorry for waking Moon up with his early morning missile tests, a South Korean official said. Kim told Moon he would be willing to visit the presidential Blue House in Seoul, invited Moon to Pyongyang, and said he wanted to meet “more often” in the future, the official said.

Just days before the summit, Kim said North Korea would suspend nuclear and long-range missile tests and dismantle its only known nuclear test site. But there is widespread scepticism about whether Kim is ready to abandon the nuclear arsenal his country has defended and developed for decades as what it says is a necessary deterrent against U.S. invasion. Two earlier summits between the leaders of North and South Korea, in Pyongyang in 2000 and 2007, failed to halt the North’s weapons programs or improve relations in a lasting way. “Today, rather than create results we won’t be able to carry out like in the past, we should make good results by talking frankly about current issues, issues of interest,” Kim said.

FIRST ACROSS THE LINE
After closed-door talks lasting more than 90 minutes, Kim was driven back to the North side in a black limousine flanked by guards who ran alongside. Crossing the border, the vehicle had to drive across a lawn, as there is not a road linking the two sides at that spot. Following lunch, the two leaders are scheduled to plant a memorial tree before resuming their meeting, finishing the evening with dinner and a film.

The leaders’ wives are expected to join them for dinner, the South said. Earlier, Moon greeted Kim at the military demarcation line where the men smiled and shook hands. In an unplanned move, Kim invited Moon to step briefly across into North Korea, before the two leaders crossed back into South Korea holding hands. “I was excited to meet at this historic place and it is really moving that you came all the way to the demarcation line to greet me in person,” Kim said.

The two were handed flowers by two South Korean children, residents of a village situated in the demilitarized zone, and met on a red carpet by a South Korean honor guard in historical costumes playing traditional music. Kim wore his trademark black Mao suit, while the rest of the North Korean delegation appeared in military uniforms or Western attire. “A new history starts now. An age of peace, from the starting point of history,” Kim wrote in Korean in a guest book in the South’s Peace House before talks began.

Minutes before Kim entered Peace House, a North Korean security team conducted a sweep for explosives and listening devices, and sprayed what appeared to be disinfectant in the air, on the chairs, and on the guest book.

UNENDING HOSTILITIES
The United States is hopeful talks will make progress on achieving peace and prosperity, the White House said in a statement as the two men began their summit. The White House also said it looks forward to continuing discussions with South Korea in preparation for the planned meeting of Trump and Kim in the coming weeks. Just months ago, Trump and Kim were trading threats and insults as the North made rapid advances in pursuit of nuclear-armed missiles capable of hitting the United States. Moon traveled to the meeting in a large motorcade, stopping briefly to greet dozens of summit supporters waving South Korean flags near the presidential Blue House in Seoul.

Hundreds of demonstrators were seen gathering in downtown Seoul from early morning to protest or support the summit. Impoverished North Korea and the rich, democratic South are technically still at war because the Korean War ended in a truce, not a peace treaty. The United States stations 28,500 troops in South Korea as a legacy of the Cold War conflict, which pitted the South, the United States and United Nations forces against the communist North, backed by China and Russia.

Kim and Trump are expected to meet in late May or June, with Trump saying on Thursday he was considering several possible dates and venues. The latest Korean summit has particular significance not least because of its venue: the Demilitarised Zone, a 160-mile (260-km) long, 2.5-mile (4-km) wide strip of land created in the 1953 armistice to serve as a buffer between the South and North.

By In Cyprus
Previous article
Oniro by the Sea
Next article
Anastasiades: The status quo is not, under any circumstances, the solution in Cyprus