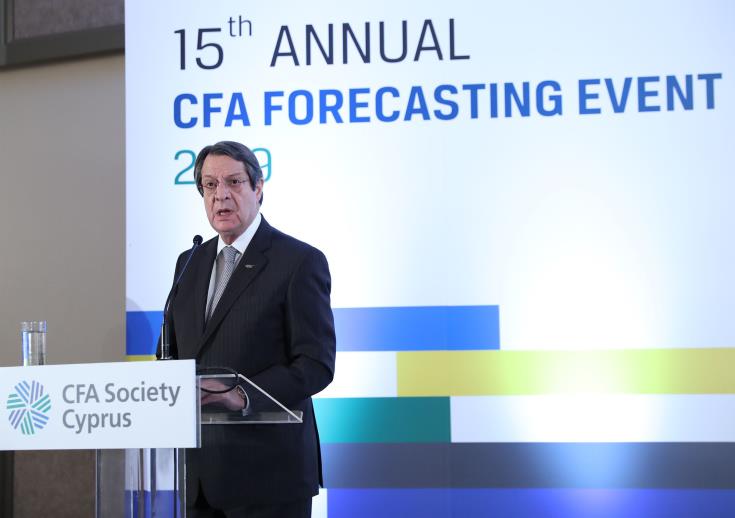 President Nicos Anastasiades has reiterated his government’s commitment to maintain and broaden the conditions that would enable fiscal surpluses and the generation of high economic growth.

Addressing the 15th CFA Forecasting event, organised by the CFA Society Cyprus on Thursday evening, Anastasiades recalled that Cyprus from a contraction of 6% in 2013 returned to consecutive high growth of 4%, from deficits of €1 billion in 2012 and 2013 generated surpluses for five consecutive years, unemployment fell from its peak of 16% in 2013 to 7.5% with a declining trend, while the Cypriot credit rating returned to investment grade status.

These achievements, he said, were not only the result of the prudent fiscal policy we followed, the strengthening of our stable and competitive tax and legal regime, the implementation of measures which facilitated economic and investment opportunities and the adoption of significant structural reforms.

It was the combination, he added, of the above-mentioned in conjunction with the patience and hard work that the people of Cyprus demonstrated, as well as the co-operative stance of the majority of the political partners, the social partners, and in particular the professional business organisations and the private sector.

The President reiterated the government’s commitment to remain focused on maintaining and broadening the conditions under which surpluses and high growth rates can be generated, continuing to improve the country’s business environment through adopting measures and implementing new incentives which facilitate economic and investment opportunities and implementing further significant structural reforms, among others, as regards the pension, welfare and labour market system, the health care system, tourism and research and innovation.

He added that “at the same time, we will of course continue to actively support the thriving financial services sector, one of the most important and productive pillar of our economy, which has proven truly resilient at challenging times, being a key pillar for the economic recovery, the growth and the job creation we are witnessing.”

Anastasiades also said that in addition to numerous tax and legal incentives we have offered, the government has actively supported the development of the industry by strengthening our national regulator, the Cyprus Securities and Exchange Commission, while enhancing the regulatory framework according to the European legislation and on best international practices.

“These initiatives, as well as the hard work of professionals in the industry, have resulted in the strong growth of the sector, especially as regards fund management,” he said.

Concluding, the President noted that in the regard, the CFA Institute and its regional societies have a key role to play and they have been doing so, in equipping professionals with the appropriate skills to competently advice clients but even more importantly, in instilling an ethical culture in its members, for the protection of investors and for the progress of the industry as a whole.

By In Cyprus
Previous article
Teen driver caught with 40 firecrackers, no driving licence or insurance
Next article
Bilateral and trilateral MoUs to be signed during Trilateral Summit in Amman, Ambassador of Jordan tells CNA