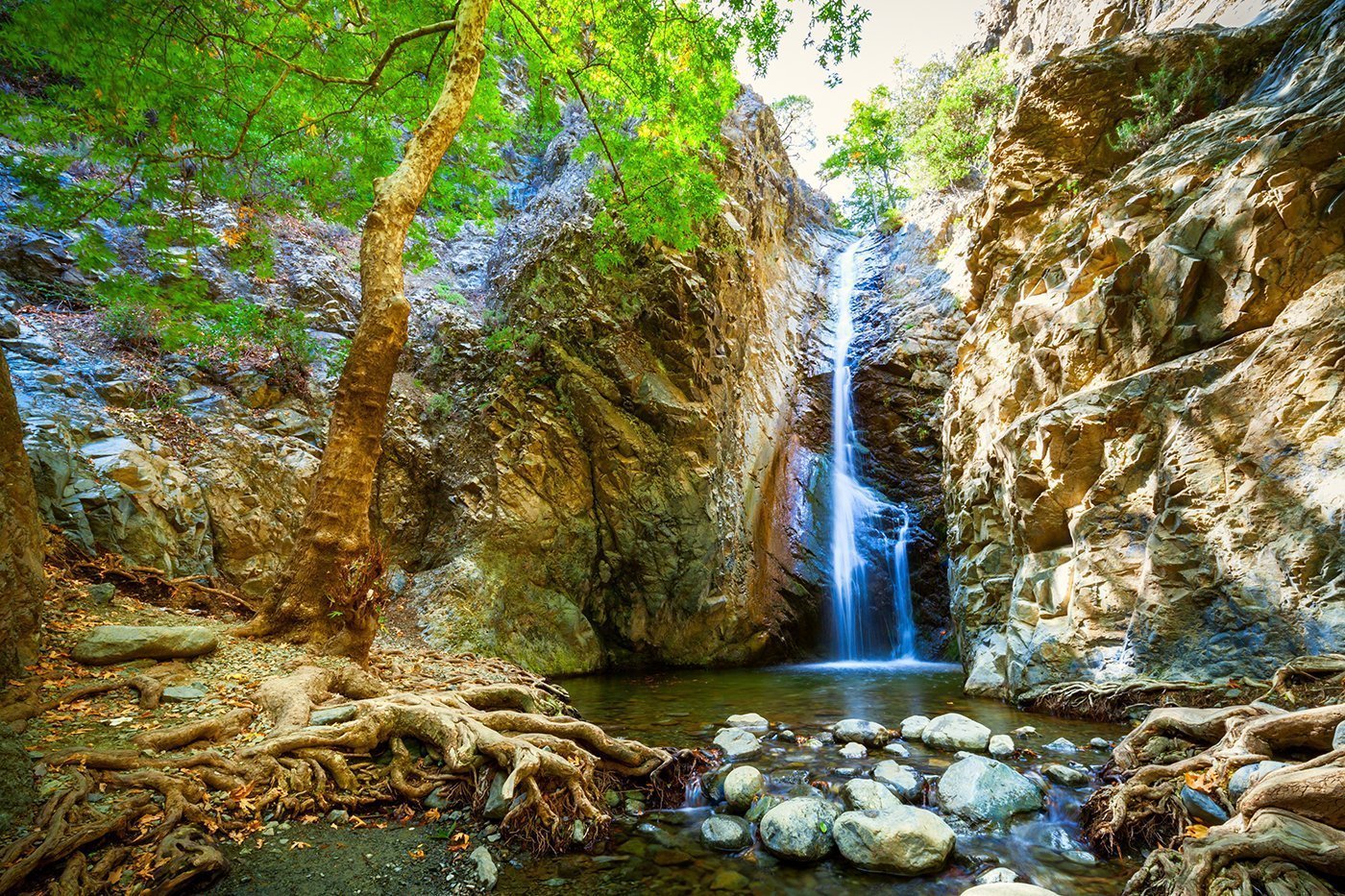 The region of Troodos is not a separate district in its own right, as is for example Nicosia. On the contrary, parts of its geographic area belong to the districts of Nicosia, Limassol, Paphos and Larnaca.  But it is presented as a separate entity because of its huge tourism and cultural interest and natural beauty.

Troodos is the main mountain range of Cyprus with the highest peak (Olympus or Chionistra) at 1952 metres above sea level. The main characteristic is the complex relief which combines gentle and easily accessible slopes with deep valleys and steep mountains.  The climate is warm and dry in the summer and wet in winter with low temperatures. The highest average temperatures at the peak ranges from 7 to 28ο C (Limassol 17-34ο) and the lowest average from 0 to 18ο C (Limassol 8-23ο). These temperatures, combined with the thick vegetation, the forests and the attractions make Troodos an excellent destination for all seasons of the year. Dotted along the stunningly beautiful route to the top are picturesque villages offering time-honoured Cypriot hospitality and authentic traditional delicacies. This is the particularly the case if you chance upon one of the festivals which are held from spring to autumn.

We recommend you stay in Troodos for a few days. This will allow you to better organize your day trips and discover the hidden treasures of the mountains. No need to worry about accommodation. There is a range of options in hotels and agro-tourist accommodation, with Platres — which we suggest serves as the base for excursions — the region’s leading resort. It is no coincidence that it was while staying at the village that the Greek poet and Literature Nobel laureate Giorgos Seferis was inspired to write his poem Eleni with the famous verse “The nightingales won’t let you sleep in Platres.”.

If you like sports and walking in the nature, then you must make sure to hike along one of the 52 signposted nature trails that cover 232.5 km. Besides the natural environment and the superb climate, Troodos has picturesque attractions, villages and a rich cultural heritage. It is worth noting that 10 churches have been included on UNESCO’s World Heritage List. Of these, the church of Ayios Nicolaos tis Stegis in Kakopetria and the holy monastery of Ayios Ioannis Lampadistis in Kalopanayiotis are the most popular. Finally, Troodos has also been included in one of the ten best emerging rural destinations of Europe by the European Destinations of Excellence (EDEN) forum in Lisbon in October 2007.

There is a lot of see in Troodos to fit in a brief stay. Since time is pressing, here are some highlights:

One of the basic dishes in the gastronomy of the region is trout. There are a number of trout farms that produce very good quality fish that you must try. And of course, you will try several of the very interesting quality wines produced in the Krasochoria (wine villages). If you visit Omodos make sure to try the traditional bread (arkatena koulouria) made from chickpea flour or from carob flour.

In Agros, try the delicacies made from roses. Spoon sweet, jams, rose water, rose liqueur etc. Also noteworthy are the traditional smoked meats such as sausages, pastourmas, lounza and hiromeri. But if you are fanatical fans of quality traditional tastes, you will discover many interesting options. After all, it is well known that small cottage industries produce wonders in our age.

Cyprus’ main mountain resort is almost in the centre of the mountain range, some 17 km. (by car or on foot) from Chionistra peak. Platres is in fact two villages. Besides the main village (Pano Platres), there is another at a slightly lower altitude (Kato Platres). It is one of the island’s old villages from the Lusignan period (12th to 15th centuries). The main characteristic of Platres is the ever- present lush vegetation. It surrounds the buildings in the village, turning the settlement into a genuinely verdant mountain resort. Staying in Platres means among other hotel facilities, a relative social life (to the extent permitted by the region) and easy access to many of the sites, many of which are at a distance of between 5 and 20 km.

There’s also places of interest in the village or just a short walk away. The most noteworthy are:

Millomeri Waterfall (1 km.):  Situated in a remote area, it has only become well known in recent year. Today you can even reach the spot (dirt track) by car.

Panayia Phaneromeni: A small chapel in a beautiful natural environment. Previously it was the village church.

Chocolate Museum: At the Kallithea Hotel de Chocolat. Worth visiting and even more, worth attending a mini seminar to discover the secrets of chocolate and to try some of the magnificent tastes. (Tel:35725422241)

Forest Park: Emblematic hotel not only for the area but for the whole mountain range. Even if your finances do not permit an overnight stay, it is well worth a visit for a relaxing drink or meal. Ideal location, traditional architecture and classical luxury make up a triptych well worth enjoying. (Tel: 35725421751).

There are a number of attractions which cannot be covered during a short stay. But, with a little guidance, by the end of your stay in the mountains you will have a good picture on what it has to offer and will most certainly want to return.

Among the most picturesque villages with paved alleys and houses built of wood and traditional stone from the area’s rivers. Old Kakopetria has been designated a monument and is under the supervision of the Antiquities Department.

Stroll along the cobbled narrow alleys in picturesque Omodos among shops that sell the famous arkatenia (traditional bread made with yeast and chickpeas) make a stop at the Monastery of Timios Stavros with valuable works of religious art and the Cyprus Struggle Museum with clothing of the period, exhibits, embroidery and woolens.

A typical mountain village in the Marathassa valley. It is considered one of the most traditional villages with a privileged location in the valley, thermal springs and interesting attractions. It is worth a stop for a stroll in the village, a visit of the monastery of Ayios Ioannis Lampadistis, Panagia tou Moutoulla and the Venetian Bridge. Make sure to leave time for a visit to the icon museum with its fine collection of Byzantine icons and relics.

If you like wine, then make sure to devote a day for an excursion on the south slopes of the Troodos to visit the Kraschoria. Twenty villages (among them Omodos, or Vasa, Vouni, Lofou) with unique architecture and cobbled roads host 16 wineries that produce quality wine from local varieties such as Xynisteri (white) and Mavro (red), and also experiment with other interesting almost forgotten varieties brought back from obscurity. Naturally, they also cultivate imported varieties such as Cabernet Sauvignon, Grenache, Syrah etc.

One of the three largest, oldest and most impressive monasteries of Cyprus. Visit the icon of Eleousa (of Kykkos) which portrays the Virgin holding infant Christ on the right and which tradition has it was painted by the Apostle Luke.

In the northern section of Solia valley, near Kakopetria, is an excellent example of a Catholic Byzantine monastery. The monastery has not survived, but the church and the frescoes are a unique attraction that have been included on UNESCO’s World Heritage list.

It belongs to UNESCO’s Global Network of National Geoparks and is located at the old Amiandos mine. Exhibited at the very interesting visitors centre are examples of all the rock types encountered in the area. The video shows the emergence of the island from the sea and the importance of Troodos’ geology.

Located in a protected Natura 2000 network area, near the abandoned Amiandos mine in Troodos National Forest Park, it is one three botanical gardens on the island.  You will be enchanted by rare and threatened flora such as aromatic and traditional garden plants.

A paradise on earth, with thousands of endemic cedars that lead to Panayia village and the famous Panayia tou Kykkou Monastery and Stavros tis Psokas forest station. The latter hosts the rare mouflon, an endemic type of wild sheep found only in Cyprus. On a short tour in the area you will come across the remains of old Venetian bridges.

Very close to Platres, it is part of Kryo Nero (cold water) stream which has water throughout the year. The waterfall is 13 metres high and is considered the highest on the island. Visiting entails a hike of about 3 km. but the endpoint will more than compensate.

NOTE:  To calculate the time needed to get to each attraction, bear in mind that in view of the road conditions, every 5 km. requires 7 to 8 minutes.