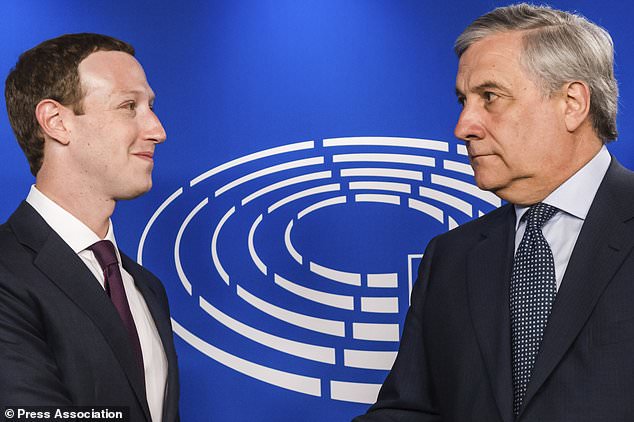 Facebook chief Mark Zuckerberg admitted his firm needed to do more to tackle terrorism, hate speech and online bullying as he was questioned by MEPs. Appearing before senior politicians in Brussels, Mr Zuckerberg also acknowledged the social media giant faced an “arms race” in efforts to prevent the platform being used to interfere in elections.

MEPs lined up to criticise Mr Zuckerberg, with one questioning whether he had created a “digital monster”.

In his opening statement, he again acknowledged Facebook had not done enough to prevent the spread of fake news, foreign interference in elections and the misuse of personal information.

“We didn’t take a broad enough view of our responsibility,” he said.

“That was a mistake and I am sorry for it. It is going to take time to work through all the changes that we need to make here but I am committed to getting this right.”

Manfred Weber the leader of the centre-right European People’s Party in the parliament, suggested Facebook had become too powerful and may have to be broken up.

By being present in the @Europarl_EN today Mark #Zuckerberg gave a signal that he wants to win back the trust lost after the #CambridgeAnalytica scandal & that #Facebook values its European users. He was not very convincing though & did not answer all our questions @EPPGroup 1/2 pic.twitter.com/ew2DuqZG5m

Guy Verhofstadt, the leader of the Liberal group in the parliament, said Mr Zuckerberg was in danger of being remembered as “a genius who created a digital monster that is destroying our democracies and our societies”.

He compared Facebook to the banks in the run up to the global crash of 2008 and questioned whether it could resolve the problems itself.

Former Ukip leader Nigel Farage said that since since January, Facebook had changed its algorithms which directly led to a very substantial drop in views and engagements with those with right-of-centre political views.

“I am not taking here about extremism. I am not talking about encouraging violence. I am talking about people who have majority mainstream opinions and frankly I feel they are being wilfully discriminated against,” he said.

Diane Dodds of the DUP raised the case of 17-year-old Ronan Hughes from County Tyrone who took his own life in 2015 after online blackmailers tricked him into sending them into intimate pictures of himself.

“This is only one example of the rise of false accounts within Facebook,” she said.

“I would like you to tell us today what you are doing to stop the rise of false Facebook accounts which deliberately target young and vulnerable people.”

The format of the session in Brussels – which saw MEPs make statements and pose questions to Mr Zuckerberg, with the Facebook chief responding to their comments at the end – drew criticism for allowing the tech entrepreneur to escape without giving full answers.

#Zuckerberg | How do you want to be remembered? As one of the three Internet giants together w/ Bill Gates and Steve Jobs? Or as a failed genius who created a #digital monster destroying our democracies? pic.twitter.com/4jnnSgefj0

Responding to the MEPs, Mr Zuckerberg said: “The bottom line here is that hate speech, bullying, terror, violence – all this content has no place on our services.

“But in order to really execute that we need to upgrade and do a better job of executing our policies.”

He said the firm was making greater use of artificial intelligence to detect offensive content.

Mr Zuckerberg also acknowledged that there were sophisticated attempts to interfere in elections “like the Russians were able to in the US presidential election in 2016”.

The Facebook boss told MEPs: “We will never be perfect on this. Our adversaries – especially on the election side – people who are trying to interfere who have access to some of the same AI tools that we will.

My message to Mark Zuckerberg today:

Stop telling us Facebook is a “platform for all ideas”. The evidence shows your algorithms censor conservative opinions. pic.twitter.com/HWLabaDcP9

“It’s an arms race and we will need to constantly be working to stay ahead.”

He insisted Facebook faced competition from “new competitors coming up every day” and while it attracted 6% of global advertising, “clearly advertisers also have a lot of choice”.

He also highlighted the 18 million small businesses in Europe which use Facebook tools.

Mr Zuckerberg also maintained Facebook has “always paid the taxes that the law requires” and was making “significant investments” in EU economies.

Responding to the concerns raised by Mr Farage, he said: “We have never and will not make decisions about what content is allowed or how we do ranking on the basis of a political orientation.”

The Facebook boss has so far resisted attempts to call him to Westminster to answer MPs’ questions.

Damian Collins, chairman of the Commons’ Digital, Culture, Media and Sport committee, said the Brussels session was a “missed opportunity for proper scrutiny”.

“Unfortunately the format of questioning allowed Mr Zuckerberg to cherry-pick his responses and not respond to each individual point,” he said.

“I echo the clear frustration of colleagues in the room who felt the discussion was shut down.

“It is time that Mr Zuckerberg agreed to appear in front of the DCMS Committee to provide Facebook users the answers they deserve.”

By In Cyprus
Previous articleCyprus supports initiatives to resolve functionality issues within the WTO, Minister Lakkotrypis says
Next articleParents go to court to boot 30-year-old son from home