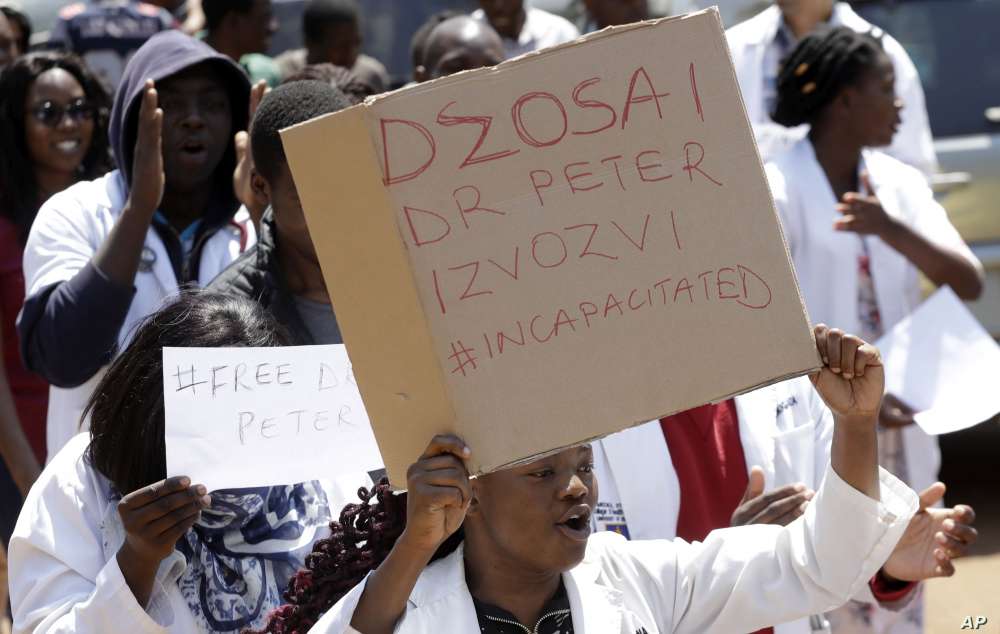 Hundreds of Zimbabwean doctors protested in central Harare on Monday over the disappearance of the leader of their union, but riot police blocked them from marching to President Emmerson Mnangagwa’s office.

Peter Magombeyi, president of the Zimbabwe Hospital Doctors Association (ZHDA), was one of the organisers of an ongoing strike to demand higher wages for state doctors because of soaring living costs, before he disappeared on Saturday night.

His colleagues have alleged he was abducted by the security services in an attempt to break the strike, which has disrupted healthcare services in hospitals, but a senior information ministry official denied the government was responsible.

Rights groups accused the government of abducting activists in the lead-up to planned opposition protests last month, when the government also denied responsibility.

Mnangagwa’s government has said it will not use excessive force against protesters after being criticised over its heavy-handed response to post-election violence last year and protests over fuel price hikes this year.

Doctors chanted “No Peter, no work” and held placards reading “Bring Peter back” as riot police stopped them from marching beyond the High Court building.

The doctors dispersed after police allowed half a dozen of them to deliver a petition to Mnangagwa’s office demanding action over Magombeyi’s disappearance, but they said their strike would continue.

“Dr Peter Magombeyi’s whereabouts remain unknown, and we are seriously concerned about this. We therefore demand his unconditional return to his family,” the petition read.

Magombeyi’s sister on Sunday filed an urgent application in the courts to compel the government to do everything to find her brother. The court was due to hear the case on Monday.

Two years after Mnangagwa and the army conspired to oust longtime ruler Robert Mugabe, people are suffering from triple-digit price rises and shortages of basic goods like fuel.

Mnangagwa’s government has promised salary increases to public sector workers, but many say those rises are insufficient.

Diplomats said they were monitoring whether authorities respect the people’s right to protest peacefully.

Some are sceptical since Mnangagwa was Mugabe’s trusted lieutenant at times when the former president, who died this month, crushed dissent during his near-four decades in power.

Bill Withers, a soulful singer best known for the 1970s hits "Lean on Me," "Lovely Day" and "Ain’t No Sunshine," has died at age...
Read more
Local

The Social Insurance Services, within the framework of preventive measures to address COVID -19, inform the public that the online application / JCC Smart...
Read more
Local

The House of Representatives on Friday approved a government bill doubling the out of court fine for violating the stay at home decree from...
Read more
Local

One more person has died, a man aged 64 with underlying health conditions, the Health Ministry said on Friday, and another 40 people have...
Read more

Bill Withers, a soulful singer best known for the 1970s hits "Lean on Me," "Lovely Day" and "Ain’t No Sunshine," has died at age...
Read more
World

Ventilators delivered by Russia to the United States to help treat patients of the new coronavirus were manufactured by a Russian company that is...
Read more
World

The European Union will struggle to get hold of large numbers of ventilators quickly to treat patients suffering from COVID-19 due to the complexity...
Read more