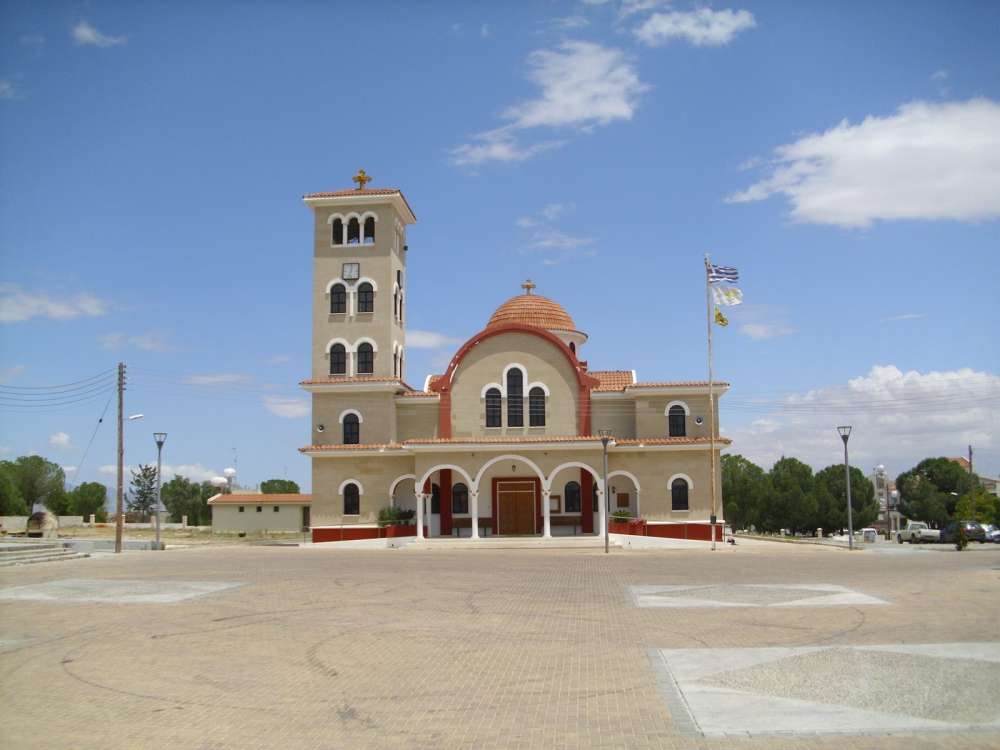 The municipality of Yeri is located 10 km south-east of the capital of Cyprus, Nicosia, and is about 4 km away from the University Campus, the Nicosia General Hospital and the National Park. Unfortunately, a part of the municipality has been occupied since 1974 whereas another smaller part is in the buffer zone.

The Church of Ayios Charalambos

The church of Ayios Charalambos was built a few years ago… It’s a church of modern architecture. The increase of the population, due to the settling of the refugees, has made the construction of another church more than necessary. For the construction of the church, the parish of Ayios Charalambos was formed on 2nd February 1986 after a meeting of the residents with the Bishop of Salamina Mr. Varnava. There were many views regarding the name of the Saint to whom the church would be dedicated. Finally, the name of Ayios Charalambos was chosen, based on the fact that there was no other church dedicated to the Saint in the archiepiscopal region, apart from a chapel in the Athalassa mental hospital.

The Church of Ayios Charalambos

Following the decision for the construction of a church dedicated to Ayios Chararalambos, a small, plain, wooden church was built up which operated for the first time on 2nd February 1986. The residents of the settlings went to this small and plain church for almost a decade. As the years went by, the construction of a bigger, concrete-made church was necessary because the wooden church was damaged and the population of the settlings had increased significantly. It was then that the decision, for the construction of a church next to the wooden one, was made. The church of Ayios Charalambos was built as a result of the efforts made by the residents of the municipality of Yeri. On 25th March 1997, the vespers service for the Annunciation took place for the first time in the newly built church. Lacks of equipment did exist but they were gradually covered thanks to peoples’ contribution. Hence, the inauguration ceremony of the new Church took place on 29th May 2000 by the Bishop of Salamina, Varnava.

The Church of Virgin Mary “Chrysoyeriotissa” stands impressively on the peak of a hillock. It is the most ancient Church of Yeri and until the middle of the 20th century, it used to be the sole church of the municipality. The church was built on the foundations of an old Byzantine monastery which was dedicated to Virgin Mary of “Alypou”. The previous structure of the church is dated back to the 16th century. Its present structure is the result of additions during the 18th century. More precisely, a seraglio was added on the western part during the primateship of Archbishop Chrysanthos.

What is noteworthy is the fact that stones from the ancient Monastery of Virgin Mary of “Alypou” were used for the construction of the church and “because of this, some remains of frescos are visible in some parts of the church”. Moreover, ruins have been preserved from the Monastery at the southern churchyard, an underground built basin used for collecting water at the north-eastern end of the property, inside of which the church is built, and a gospel. The gospel is kept today in the library of Carpentras in France.
Church of Panayia Chrysoyeriotissa

In 2001, the Department of Antiquities of the Republic of Cyprus declared the church as an ancient monument and in 2006 proceeded with renovation works. The yard will also be reshaped during the current year.

The church celebrates on the 8th of September, holiday of Virgin Mary’s Birthday. There is a regular Mass Service at the church as well as Sacraments.

The main church of the Municipality is dedicated to Martyr Saint Minas the Egyptian. The construction of the church started in the beginning of the 20th century, more specifically in November 1916 during the reign of Archbishop Kyrillos the 3rd, and it was accomplished in 1953 due to financial obstacles. On 13th September 1953 the church was inaugurated by Archbishop Makarios the 3rd. Possibly, but without confirmation, the church was dedicated to Saint Minas because in the past there had been a shrine and a vigil candle at this place.

Internally, the church is adorned with a “wood-carved iconostasis, work of the pioneer craftsman of ecclesiastical fretworks Chrysanthos Taliadoros from Omorphita”. The icons of the iconostasis follow a western style and are the works of the well known painter Panaretos Kasoulides from Lefkosia.
Church of Saint Minas

Worshipers mention that “the important milestones during the short history of the Church” are the following; in 1992, the Church was expanded towards the west, the floor was replaced and new chandeliers and stalls were installed. A new belfry was also built in the same year. In 1998, the churchyard was renovated. In 2006-2007, extensive maintenance and repair works took place at the church as well as installation of an air-conditioning system.

The Church of Saint Minas celebrates on November 11th.

The chapel of Virgin Mary of “Palloura”

Museum with traditional folk exhibits is located at the centre of the municipality, near the church of Agios Minas. The Museum was created in 2004 by Mr. Antonis Antoniou with his objective being to promote folk art objects and objects related to traditional professions.

Courtesy of the Yeri Municipality Council