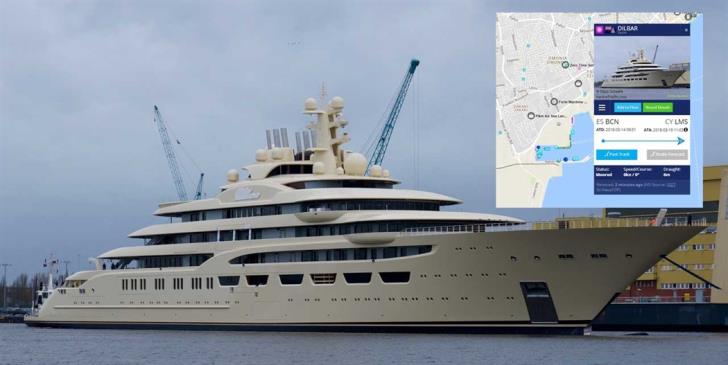 The United States Navy amphibious warfare ship “Iwo Jima” might have been the talk of the town these days, but for the last 48 hours Dilbar – the world’s biggest super yacht – is anchored right opposite it in the port of Limassol.

The yacht belongs to 63-year-old Russian billionaire Alisher Usmanov, known for being the second-largest shareholder of the British football team “Arsenal” with a 27% stake and arrived in Limassol directly from Barcelona. The yacht was custom built for Usmanov in one of the most modern shipyards for luxury yachts in the world in Germany and was delivered in 2016 against a total cost of $600 million.

“Dilbar” is 157m long and 24m wide, while its interior space in volume adds up to 3.850 square metres and has enough space for 40 passengers and 85 crew members. Dilbar features two helipads – one on the sundeck and on the bow – specially designed for Airbus H175 helicopters. The indoor swimming pool of the luxurious yacht has 185 square metres in volume and requires 225,000 liters of water to fill.  The yacht weights 16.000 tons and can reach speeds up to 22.5 knots.

Usmanov has an estimate net worth of over 13 billion, while he built his wealth through metal and mining operations and investments. He also owns the Kommersant publishing house and shares in telecom, Facebook and Alibaba. His wife, Irina, is a Russian rhythmic gymnastics coach, head of the Russian national team and former president of the International Gymnastics Federation.

By In Cyprus
Previous articleComo Osteria
Next articleHealth & Safety