The attackers, under attack 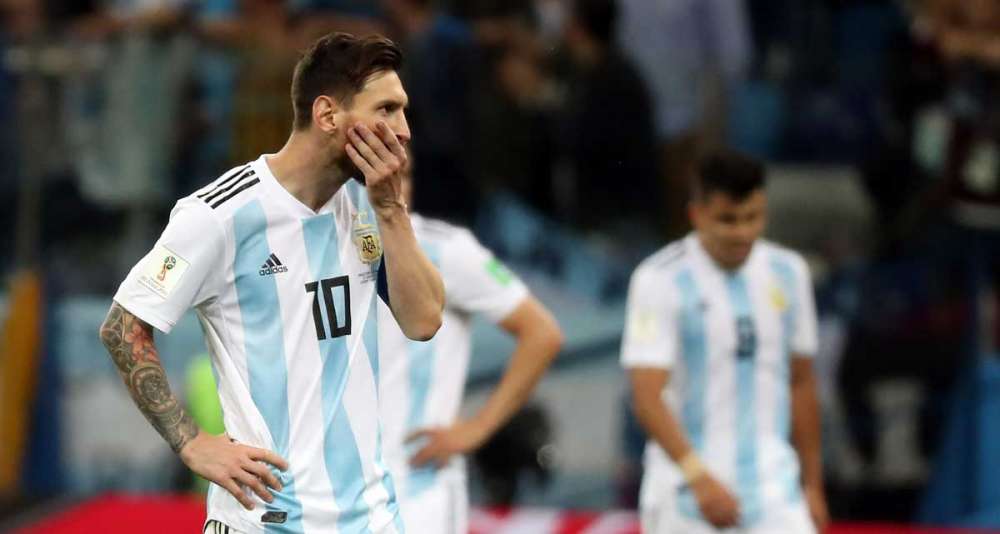 Surely it couldn’t get worse for Argentina. In its opening World Cup game, against tiny Iceland, a game in which captain and national treasure Lionel Messi missed a penalty, the Argentines were held to a draw. But on Thursday the 2014 runners-up found that it could indeed get worse. Much worse.

Disappointing against Iceland, Argentina put in a shambolic display against Croatia here in a 3-0 loss that left it on the verge of early elimination. Even if manager Jorge Sampaoli can somehow solve his misfiring team’s numerous deficiencies and defeat Nigeria in its final Group D game, Argentina will still need other results to go its way to qualify for the knockout phase.

It took just a few minutes of action for the thousands of Argentina fans who streamed down Karl Marx Street and into Nizhny Novgorod Stadium to realize that the weaknesses their team displayed against Iceland were not just first-game jitters, but deep-lying flaws.

From the start, Sampaoli’s rejiggered defense looked liable to make an error — and exactly that happened, in the 53rd minute when goalkeeper Wilfredo Caballero gifted Croatia’s Ante Rebic the game’s opening goal. At the other end, Messi, usually such a potent attacking force, looked like a man strolling in a park while a soccer match took place around him. In the first hour, Messi played just 15 passes. By the end of the match, Caballero had made more passes than Messi: 36 to 31.

“After they scored on us, we were emotionally broken,” a chastened Sampaoli said after the match.

Croatia took the lead in bizarre fashion. Caballero, who was also involved in a mix-up that allowed Iceland to score its lone goal in the first game, fluffed a chipped pass, scooping it up straight to Rebic, who thundered a volley into the net from close range to give Argentina a 1-0 lead.

While the goal came off a mistake, Croatia had looked the more threatening side even before Caballero’s aberration. Perhaps more impressive, its defense had shackled Messi almost completely.

Shorn of the ball, locked out of the pockets of space he uses to devastating effect with Barcelona, Messi dropped deeper and deeper in search of possession, until he appeared to give up all hope of influencing the game. He wandered around scratching his head, or pulling on his beard, as blue-and-white-clad teammates floundered around him.

“We quite simply couldn’t pass to him,” said Sampaoli. The Croatian captain, Luka Modric, reveled in that fact, noting his team’s ability to “cut off the supply line” to Messi.

Modric, in contrast, put in a fine individual performance punctuated with an 80th-minute goal that resembled the sort of strike that Messi has made his hallmark. Modric received the ball on the edge of the area, took two touches, then quickly swerved to find just enough space to bend a shot past Cabellero.

The goal all but sealed the result, but there was still time for one more breakdown in the Argentine defense. Messi’s Barcelona teammate Ivan Rakitic, who had earlier struck the bar with a free kick, scored on a tap-in off a pass from Mateo Kovacic just yards from the goal mouth.

The result meant Croatia could begin looking toward the knockout rounds, almost definitely assured of going through, while the recriminations for Argentina began almost immediately. The comparison between Messi’s struggles and the brio displayed by his great Portuguese rival Cristiano Ronaldo in the tournament have been inevitable — another burden on the shoulders of a player who seemingly carries the hopes of 40 million Argentines on his shoulder.

Ronaldo has four goals from two tournament games. Like Messi, he’s at times expended little energy, playing at walking pace on occasion. But while Messi’s strolls have led him into cul-de-sacs with no exits, Ronaldo’s have been paved with goals. Ronaldo’s beaming smile has contrasted with Messi’s furrowed brows. On Thursday, Messi’s bowed head was first down the tunnel, a speedy exit from the scene.

Sampaoli had described Messi with almost religiouslike fervor before the tournament, painting him as a superhuman presence that transcended his peers. Two poor games have failed to dent the devotion, with the coach blaming himself and the rest of the roster for Messi’s difficulties.

“Right now we shouldn’t compare the two players, the reality is the state of the Argentina squad clouds Leo’s brilliance,” he said of Messi and Ronaldo. “Leo is limited because the team isn’t functioning as well as it should be.”

Argentina’s failures in Russia are perhaps not surprising given the turmoil the national team, and the sport in general, has endured in Argentina. The national team is on its third coach since falling just short in Brazil four years ago, and it stumbled through South American qualification before just squeezing its way to Russia. Its national soccer federation, even, is a constant source of drama, requiring an emergency management team appointed by FIFA in 2016 following a series of crisis.

“A table has four legs, and Messi can’t be all four,” said Jorge Cignetti, 59, who was at his third tournament watching his beloved Argentina. “The other legs are all broken.”

The one constant during that time has been the armada of support from the stands, and fans like Cignetti, who traveled from Córdoba. Their hopes of a repeat of the World Cup wins of 1978 and 1986 now all but over, the fans continued to sing the songs that have reverberated across Russia until the very end.

“I am the one responsible,” Sampaoli said, asking for forgiveness. “I was just as dreamy-eyed as any fan, and I’m really hurt by this.”