Spain an Portugal play a draw for the ages, starring a player for all time 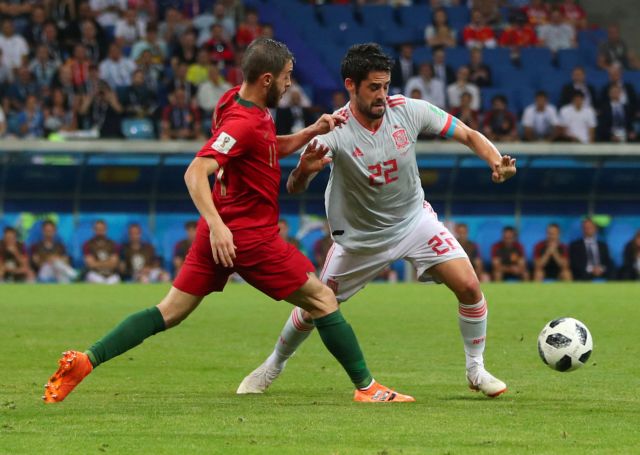 All Spain’s fans could do, after it was over, was applaud. There was no sense wallowing in disappointment, worrying about what it all might mean. Spain had victory snatched away at the last moment, denied a cathartic moment by its nearest neighbor, and yet there was no bitterness, no sorrow: only admiration, and awe. Sometimes, it is not the winning, but the taking part.

There surely must have been a better World Cup group game in the past than the compelling draw between Spain and Portugal on Friday. There has to have been one played at a higher standard, one richer in drama and more absorbing. And wherever, and whenever, that game was played, it must have been truly remarkable.

Because topping what occurred Friday is no simple task. Twice, Portugal led. Twice, Spain recovered, before Nacho Fernández scored the sort of goal that is supposed to be beyond the skill of a stand-in right back. The goal gave Spain the lead for the first time in the match and put Fernando Hierro, the Spanish coach, on course for an immense victory only one game, and two days, into his job. And then Cristiano Ronaldo, yet again, intervened.

If Spain’s preparations for this game have been troubled — firing its previous coach, Julen Lopetegui, on the eve of the tournament for failing to disclose that he was about to take charge at Real Madrid — then Portugal’s have scarcely been better.

Several members of the team, which won the European championship in 2016, are on the verge of rescinding their club contracts, at Lisbon’s Sporting CP, because of intimidation by fans and a breakdown in their relationship with the club’s president.

On Friday morning, meanwhile, only a few hours before the game, it emerged in Spanish news media reports that Ronaldo himself had agreed to pay the Spanish authorities $21.8 million in unpaid taxes. He has also been given a two-year suspended jail sentence, the papers said. It would be hard to believe that these developments did not faze him as the game approached.

He had taken 44 free kicks in previous World Cups. He had scored on none of them. Still, you know what they say: the 45th time’s a charm.

It is true that Ronaldo, at 33, is not the player he was. He is still perfectly sculpted, of course, a Men’s Health magazine cover made flesh, but the electric pace has fizzled a little; he does not cover quite as much ground (only one player, Portuguese defender José Fonte, ran less than Ronaldo in a first half in which one of them scored twice).

But it is equally true to say that Ronaldo, even in his twilight, shines brighter than almost any player with whom he comes into contact. He has not so much faded as a player as evolved into something different. It is misleading to suggest that he has transformed into a striker, a penalty-area predator, because he is not really restricted by such mortal concepts as geography.

Instead, he has attained a level of such devastating efficiency that he now does not really require something so mundane as the ball. He does not need to be involved. He looks, often, like he is doing nothing, or something quite close to it — as if he is a mere passenger. It is an illusion. He is always in the cockpit.

Isco, his Real Madrid teammate, was the dominant player on the field here, the one who was most involved, who prompted and probed and prodded, and he was wearing a Spain jersey. Ronaldo has moved beyond needing to dictate games. He concerns himself only with defining them.

His free kick, needless to say, curled artfully, effortlessly, past De Gea and into the corner of Spain’s goal, as Ronaldo — despite all historical evidence to the contrary — must have known it would.

Portugal, which is now best thought of as a nation established in 1128 so that it might one day produce Cristiano Ronaldo, would have its draw. More important, the 2018 World Cup had its spark. The afterglow of a game like this can last for a couple of weeks, at least; on this stage, it can resonate around the world.

Spain would have been forgiven for feeling like a victim. It had been the better team in this game, had more of the ball, created more opportunities, played the slicker, smoother soccer.

It had looked every inch a contender for a World Cup title and nothing like a side still reeling from Lopetegui’s departure, shaken to its core by a dispute between its players and their ultimate bosses at the country’s federation, having to adjust to life under a new coach who, until now, had only managed one second-division team.

That Spain’s players did not let all this deter them Friday only served to emphasize the scale of Ronaldo’s performance and the overall quality of the match.

And when the final whistle blew, the stadium stood: not just the clusters of Portuguese fans, not just the neutrals and the Russians, but the Spanish fans, too, in those blood-red jerseys. They applauded their own team, of course; there was enough encouragement there to see the bigger picture, to believe that the tumult of the last few days may not be fatal to their hopes.

But when Spain’s players had left the field, and Portugal’s stood in the center circle, the Spanish fans remained standing, and they kept clapping, as every single Portuguese player sought out Ronaldo, to clasp his hand, to ruffle his hair, as though just to touch him was to brush against something holy.

They do not mind that he attracts — demands, really — all of the attention. They do not mind being in the supporting cast, just as those Spanish fans did not mind providing the audience for the three acts of his one-man show. Sometimes, it is a pleasure simply to be there; sometimes, it is a pleasure just to sit back and watch. And at the end, sometimes there is nothing to do but applaud.