Salah returns, but it’s the Russians who prevail 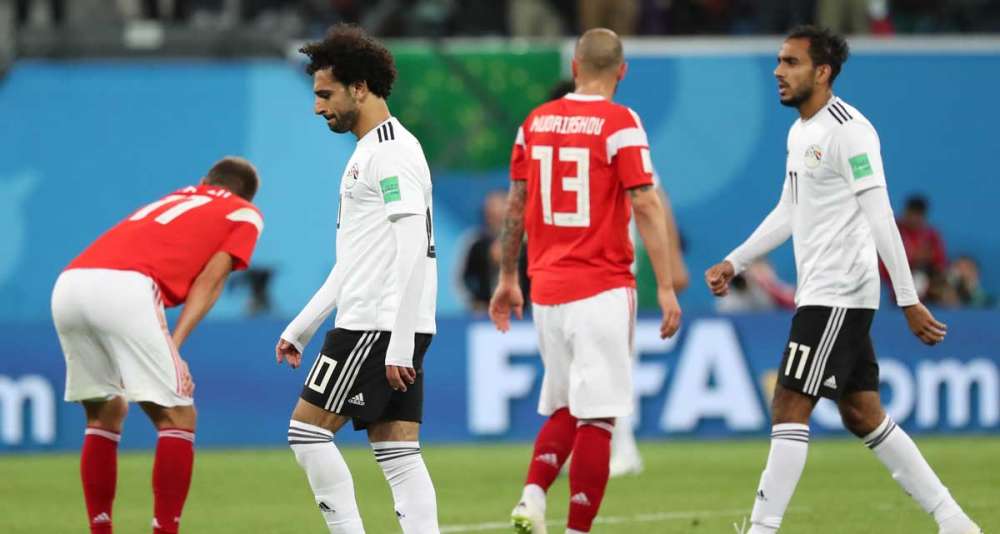 In the end, even the mighty Mohamed Salah could not shake Egypt free from its World Cup hex. Salah, the Liverpool star whose damaged shoulder had become the world’s most obsessed-over body part, had the unenviable task Tuesday of trying to halt the momentum of a surging Russian team in his first game since he was injured in the Champions League final last month.

That proved too much to ask, even for the Premier League’s leading goal-scorer this past season. Russia, which entered this tournament off a series of uninspiring results, was certainly not seen as an offensive juggernaut. But through its first two World Cup matches, Russia has outscored its opponents by 8-1, leaving Salah as its most prominent victim and all but ensuring a berth in the knockout round.

“We did our homework; we learned from our mistakes,” Russia manager Stanislav Cherchesov said after the 3-1 victory.

On Tuesday, Russia notched three goals in the first 16 minutes of the second half, with an own goal starting the flurry that crushed the Pharoahs’ spirit and likely made millions of Egyptians wonder whether the World Cup and their national team would ever get in harmony.

Egypt has won seven continental championships, including three straight in 2006, 2008 and 2010, but is appearing in just its third World Cup. And this year’s journey started to seriously unwind two minutes into the second half, when Egypt’s captain, Ahmed Fathi, had a Russian cross deflect off his foot and scoot past the helpless Egyptian goalkeeper, Mohamed El-Shenawy, for the first goal of the game.

Twelve minutes later, Russian midfielder Denis Cheryshev, who scored twice in Russia’s 5-0 rout of Saudi Arabia in the World Cup opener, sent the crowd of 64,000 — and the rest of Russia — into a frenzy with his third goal of the tournament.

Cheryshev one-timed a perfect pass from the end line by Mário Fernandes, who was born in Brazil but became a Russian citizen in 2016. Striker Artem Dzyuba then put Russia ahead by 3-0 when he captured a 40-yard pass at the top of the penalty area and slammed a shot into the net.

Salah did finally muster a response, drawing a penalty in the 72nd minute and burying the kick from the spot. But on a day when he was not fully fit, that was hardly enough to turn the match around.

“The game was 94 minutes, and we had 10 to 15 very bad minutes, and that was the reason we lost,” said Egypt’s Argentine manager, Héctor Cúper.

Cúper, Salah and Egypt are now left with dreams of what might have been. With two losses in two games here, they have virtually no chance of advancing to the knockout round. All that remains, most likely, is a final group-stage match against Saudi Arabia on Monday.

And so Salah’s World Cup will almost certainly end in disappointment. For months, ever since he began dumping in goals for Liverpool the way Stephen Curry drains 3-pointers, there had been near-limitless hope, in Egypt and its diaspora, that he would be a source of magic in this tournament.

Salah led Egypt through World Cup qualification with five goals and became a unifying force in a deeply divided country. But then the World Cup banana peel appeared courtesy of Sergio Ramos of Real Madrid, whose rough tackle of Salah during the first half of the Champions League final May 26 wrecked Salah’s shoulder.

The injury relegated Salah to the bench for Egypt’s World Cup opener against Uruguay, needing four more days of convalescence before being healthy enough to play — enough being the key word there. But Tuesday, Salah had essentially had no choice but to play, diminished though he might have been.

In the end, Salah, with a damaged shoulder and a weak group of teammates around him, could not do enough. On Tuesday it was Cherchesov, the Russian manager, who walked off the field waving his arms in jubilation to chants of “ROO-SEE-YAA!” Russia’s final group match is against Uruguay, and it almost certainly will advance safely even without a victory or tie.

In contrast, Salah’s World Cup is almost certain to end in six days. Like plenty of other stars before him, Salah confronted the harsh reality Tuesday of how difficult it is to excel without the usual strong support at the club level, with players like Roberto Firmino, his Brazilian teammate at Liverpool.

In World Cup qualifying, however, Egypt largely succeeded because of its improved defense, conceding just six goals in eight games.

And for the first 45 minutes Tuesday, the Egyptian back line held strong, intercepting and deflecting balls and neutralizing a series of Russian attacks. El-Shenawy, the goalkeeper, commanded the area around his net, coming out to punch away cross after cross.

At the same time, Egypt struggled to find a consistent link to Salah in the middle of the field, where the game often looked more like pinball than soccer.

His only real chance of the first half came after 42 minutes, when he got the ball 18 yards out from the Russian goal, spun free from Russia’s Yuri Zhirkov and curled a shot well wide of the left post.

He got another look from 10 yards out in the 57th minute but could not shake free of his defender and corral a twisting ball well enough to get off a clean strike on goal. He did finally draw the penalty shot, but it was too little, too late.

“What would have happened if he had been in top form in both matches?” Cúper asked after Egypt’s loss Tuesday. “That is very hard to say.”