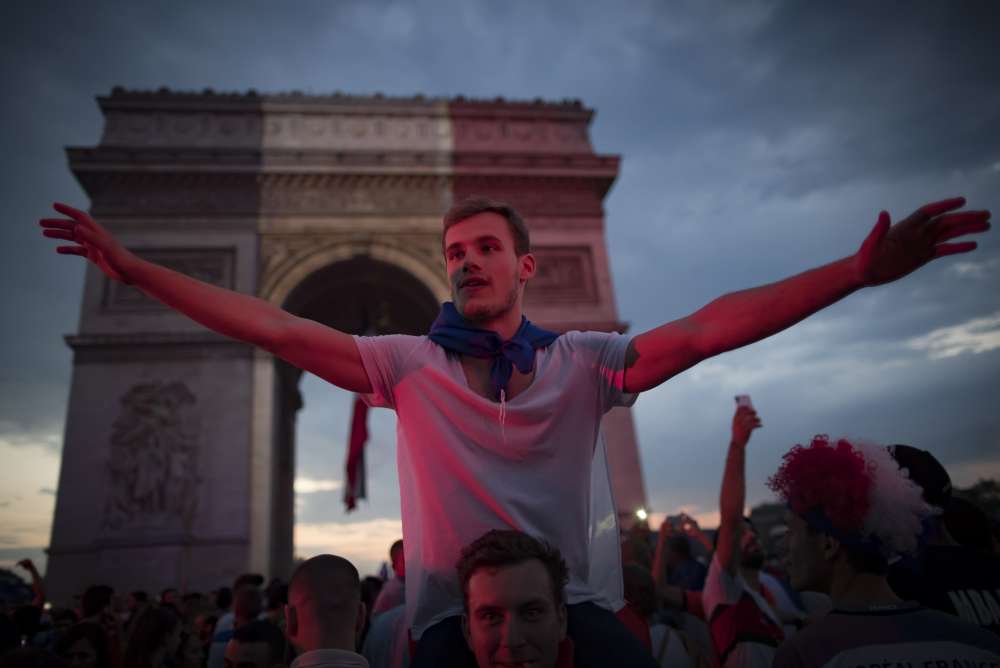 France’s first goal arrived off a Croat’s head, and its second only after the intervention of the Argentine referee. But it was the next two goals, the low, hard shots that delivered the World Cup back into French hands, the goals that crowned its latest generation of stars, that confirmed what everyone knew even before its 4-2 victory over Croatia was complete: France was the best team in the field this summer in Russia, a potent mix of greatness, grit and good fortune. And now it can call itself the world champion again.

“We do not realize yet what we just did,” left back Lucas Hernández said. “When we arrive tomorrow in Paris, we will realize.”

The title is France’s second, and its first since it won on home soil in 1998, and it ended a thrilling run by Croatia over the past five weeks. The Croats survived three consecutive extra-time games — and two penalty shootouts — in the knockout rounds to reach their first final, and they even had the better of the game on Sunday. But bad bounces and a better opponent made all the difference.

“We have no regrets because we were the better team for much of the game,” said Croatia midfielder Luka Modric, who was awarded the Golden Ball as the tournament’s outstanding player. “Unfortunately, some clumsy goals swung it their way.

“They will be celebrating, but we can hold our heads high.”

France won by doing what it had done for six previous games: It fought off its opponent when it had to, and punished it when it could.

And when the final whistle blew, its players raced off the bench in glee, gathering in jumping hugs and tossing their coach, Didier Deschamps, in the air. Deschamps, a midfielder on the 1998 France team, had become something a father figure for his young team, a guiding hand on the wheel, keeping everything in line on a methodical march toward the title.

His 2018 team will not be remembered as the most elegant champions, or the most creative. Instead, it will be remembered for what it was: a team of exceptional talent and ruthless efficiency, a group in which every player knew his job and performed it flawlessly.

But all that it achieved — through diligent planning, hard work, relentless discipline and the occasional brilliance of the young striker Kylian Mbappé, the galloping midfielder Paul Pogba and the steadfast defense of N’Golo Kanté, Raphaël Varane and Samuel Umtiti — was remarkable nonetheless.

France was not so much great as fundamentally outstanding: a team of top-class talents willing to sublimate their individual games to a collective mission; a team confident enough to surrender possession against even lesser teams and strike back on the counter; a team capable of scoring superb goals but also willing to accept whatever it was given.

Even on Sunday, as Croatia’s talented midfield of Modric, Ivan Rakitic and Ivan Perisic controlled play in the first half, France still came out ahead. Presented with an own goal and a penalty kick — the first goal in a World Cup final attributed to a video-assistant-review decision — France pulled away with the help of Mbappé’s unmatched combination of speed and skill after halftime, turning one break into a Pogba goal and a second into Mbappé’s third of the tournament.

Not even bad luck of its own, like a blunder that handed Croatia a second goal late in the game and cut the French lead to two goals, came with any real price. France merely regrouped and saw the game out, and then waited, snapping selfies and waving flags, to pick up its golden reward.

“We did not play a huge game but we showed mental quality,” Deschamps said. “And we scored four goals anyway.”

The French scored first, or rather Croatia did — with striker Mario Mandzukic heading a free kick over his own goalkeeper in the 18th minute. Stunned, Croatia found its footing and tied the match 10 minutes later through Perisic, but soon was behind again in a moment both historic and controversial.

The incident came in the 35th minute, when a ball served into the box tipped off a French player and onto the hand of Perisic, who did not seem to see it arriving. The Argentine referee, Néstor Pitana, initially signaled a corner kick. France’s players immediately appealed for a penalty, but Pitana did not budge.

Then the decision was reviewed using the VAR system, which was approved controversially earlier this year for use in the World Cup for the first time, and had performed above expectations in the tournament. Pitana went to the sideline between the benches and, with the VAR’s voice in his ear, scrolled through the play before returning to the field to signal a penalty kick for a handball.

Antoine Griezmann stepped up and calmly rolled the ball in, and just like that history was made and the French were back in front, 2-1.

Pogba, controlling his own rebound to score in the 59th minute, and Mbappé, firing around a defender and past Croatia’s screened goalkeeper Daniel Subasic in the 65th, soon made the VAR-assisted goal a footnote. Not even Lloris’ blunder could stop France by then; as it had in most of its games at this World Cup, it sent on a few substitutes and simply strangled the life out of the game to complete its triumph.

It was a day for Deschamps. For Pogba. For Mbappé. It was a day for France to celebrate a new generation of heroes, to eagerly await their return for a Parisian celebration, and to hope it will not be 20 more years before they can do it again.

By In Cyprus
Previous article
Moody’s says sale of Bank of Cyprus UK is credit positive
Next article
Update: Traffic back to normal on Nicosia-Limassol highway (pic)