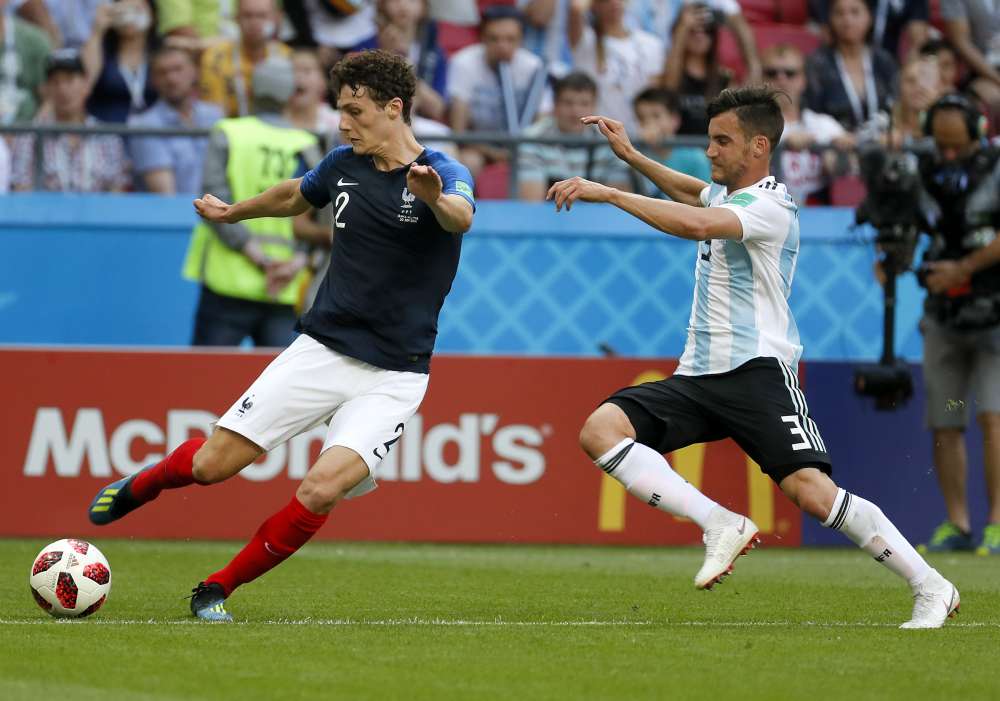 It was one of the most spectacular goals of this World Cup, and what made Benjamin Pavard’s 20-yard half-volley against Argentina all the more remarkable was that so few saw him coming.

A little more than a year ago, Pavard, 22, was playing in the German second division with Stuttgart. Called up to France’s national team for the first time in November, he was not expected to make manager Didier Deschamps’ final 23-man roster for the World Cup in Russia. He certainly was not expected to displace the incumbent at right back, Djibril Sidibé, in the starting lineup.

But there was Pavard at the heart of the matter on Saturday, making his mark — and the World Cup highlight reel.

Pavard pounced with Les Bleus trailing Argentina by 2-1 in the second half, scoring not only his first goal for France but the first goal of his career with his foot.

“I’ve scored two goals with my head, but, I mean, I never score goals,” he said after France’s 4-3 victory earned it a place in the quarterfinals against Uruguay on Friday. “But the ball came, and I did not ask myself a bunch of questions. And it worked.”

France-Argentina was a white-knuckle ride, full of quick strikes, abrupt shifts in fortune and, of course, goals. But if the French get past Uruguay on Friday and continue their latest deep run in a World Cup, Pavard’s goal will loom ever larger.

Argentina had commandeered the momentum by taking the lead in the 57th minute. Pavard was covering Gabriel Mercado when Mercado redirected Lionel Messi’s shot past French goalkeeper Hugo Lloris to make it 1-0.

But Pavard compensated memorably just nine minutes later, combining with the other 22-year-old newcomer in France’s back four: Lucas Hernández.

Hernández’s lunging cross from the left wing bounced twice through the core of the Argentine defense. Pavard, leaning far to his left, met the ball in midair with the outside of his right foot.

Pavard probably would not be playing such a prominent role if not for an injury to Sidibé’s right knee, suffered on April 15 as Paris Saint-Germain routed Sidibé’s AS Monaco team, 7-1.

Sidibé was in doubt for the World Cup, and then, after securing his spot, nearly went home after the knee swelled again in Russia. Sidibé did start the third group match against Denmark after France already had clinched a spot in the knockout round. Pavard has started France’s other three matches.

“I haven’t asked the coach for explanations,” Sidibé said at a news conference in Russia. “In this context, you’ve got to put personal feelings aside.”

Pavard, who has particularly curly hair, has been nicknamed “Jeff Tuche” by his French teammates after the curly-haired father in the French comedy film series “Les Tuches.” Pavard confessed to being weary of the nickname, but he has kept playing along, just as he has kept playing along when his teammates tell him, with his small-town French roots and throwback tastes in music, that he belongs to another time.

His game is fully compliant with 21st century norms, though, and his play in Russia is beginning to draw interest from some of Europe’s elite clubs, including Bayern Munich.

To reach this level, Pavard felt he had to leave France altogether. After playing little for Lille during the 2015-16 season, he decided to accept Stuttgart’s offer even though the once-powerhouse club had just been relegated to the second tier in Germany.

Some in the French soccer world told him he was making a mistake. Pavard said the risk and the need to adapt to another culture helped him mature.

Stuttgart earned promotion back to the Bundesliga in his first season. He played a variety of positions, including midfielder, but after the arrival of new coach Tayfun Korkut in late January, Pavard began playing exclusively as a central defender. He played every minute of all 34 matches as Stuttgart finished seventh in the league.

But Deschamps has used him at right back, which makes for a historical parallel with Lilian Thuram, Deschamps’ teammate when France won its only World Cup, in 1998. Thuram preferred the center back position that he played with his Italian club, Parma, but France’s coach at the time, Aimé Jacquet, used him at right back. Thuram scored twice during France’s semifinal win over Croatia that year.

As Pavard has been wise to point out, there is no sense making too many comparisons too quickly. Thuram was one of the best defenders France has produced. Pavard is just getting started.

Yet, few will soon forget his goal against Argentina. Pavard joked that he had “killed a pigeon” with a similar attempt in practice that soared off his foot, but this time he left the pigeons in peace.

Not the Argentines, though.