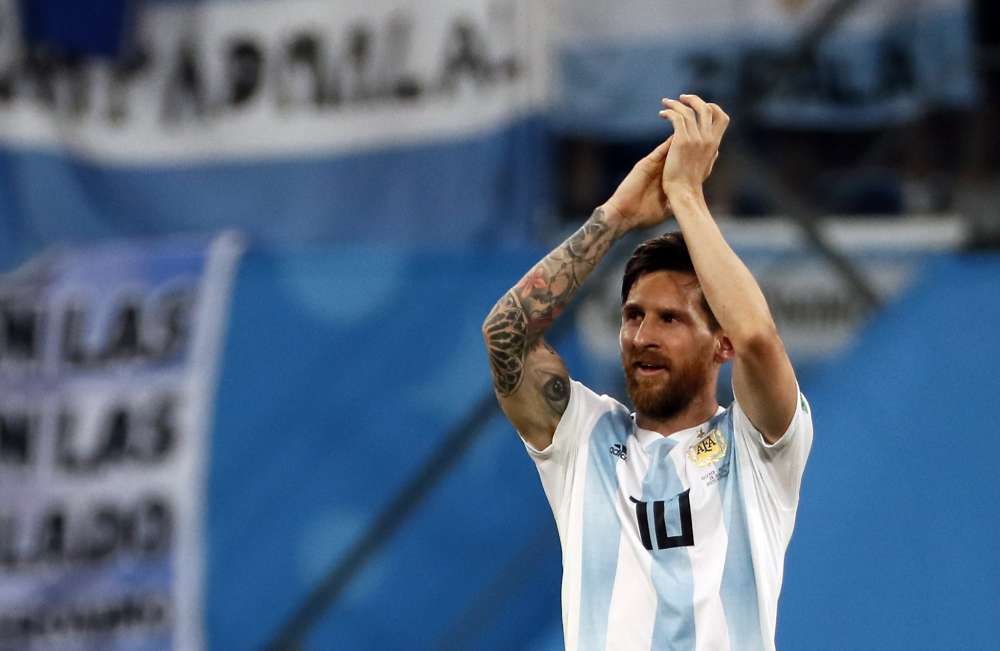 High in the stands, Diego Maradona raised his eyes to the heavens, his arms in supplication, and muttered two words: Gracias, Dios.

Not for the first time, Maradona detected divine intervention just when Argentina had needed it most. This time, though, it had been a holy trinity, rather than a hand of God, on the field in front of him: the first touch to cushion the ball; the second to roll it into position; and the third to sweep it past Francis Uzoho, Nigeria’s goalkeeper, and send a nation into rapture. Lionel Messi, once more, had delivered a goal, and perhaps salvation.

But Argentina’s deliverance could not be that simple, of course. Its campaign in Russia is only a couple of weeks old, in simple chronological terms, but it has been conducted against such a fever pitch of emotion that all involved must feel as if they have been at Bronnitsy, the team’s training base, for years.

There have been rumors of mutinies and allegations of coups, leaked WhatsApp messages, pointed comments and staged reconciliations, baffling tactics and incoherent team selections, countless inquests and accusations, and thorough forensic examinations of the nation’s soul. It would not have been right for this evening to have been straightforward. It had to be complex and hollowing and euphoric, a 90-minute live episode of a never-ending telenovela. It had to be distinctly, unmistakably, Argentine.

And so Javier Mascherano conceded a penalty shortly after halftime, Nigeria equalized and, for a while, Argentina was set to be knocked out of the World Cup. There was a Video Assistant Referee, or VAR, review that could have meant a defeat for Argentina to go with its despair. There was a chance for Gonzalo Higuaín to win it, spurned. There was the fear and the frenzy setting in.

Then, in the blink of an eye, Gabriel Mercado crossed the ball and Marcos Rojo — the central defender, the part of the team that symbolizes all that is wrong with this Argentina — produced the purest, most sumptuous volley.

The ensuing noise made the stadium shake. There was Rojo, wheeling away, celebrating, carrying his country away from humiliation and shame — carrying it in to the last 16, carrying Messi on his back.

It is usually, of course, the other way round. In hindsight, Messi said he knew Argentina would prevail, eventually. “I knew God would not leave us out,” he said — but only after sending all God could to try them.

“I don’t remember ever having suffered as much, with the situation, with what was in play,” Messi said.

In these last few days, these last two weeks, it has been clear that he has felt the strain more than most, more than expected.

Woven into the pressure on his national team, there was the endless dichotomy drawn between Messi and Cristiano Ronaldo: that the former is blessed with God-given talent, the latter the product of relentless self-improvement.

There is no great secret as to why Messi, 31, might have felt under such strain: He has been ordained to win the World Cup for Argentina for the first time in 32 years; he has been told, time and again, that this will be his last chance to do so; he has been made to feel that only by claiming the one prize that has always eluded him will he be able to count himself among the true greats of the game. He started to believe that it was in Russia that his legacy would be cemented or exposed. He, like anyone would, has found that a terrible burden to bear.

Against Nigeria, for the first time, he gave the impression that he had started to work out how to shoulder it effectively. After he toiled in Argentina’s first game, a 1-1 tie with Iceland, and after Ronaldo scored a hat trick in Portugal’s opener against Spain, the common refrain was that pressure was limiting Messi but inspiring his rival.

In St. Petersburg, in a stadium decked out in blue and white, Messi was presented with a game that — if it ended in failure — would most likely have been his last one in a World Cup, and possibly his last appearance for his country.

He did not buckle, did not shrink into himself. He took to yet another new role on this Argentine squad — wide on the right, back where it all began for him all those years ago — and then scored the sort of goal that moved even Maradona to grateful prayer. Just at the point when it seemed he would bend and break, Messi stood tall.

It would have been neater, of course, had his goal proved to be the decisive one — had that blur of movement, that perfect marriage of athletic technique and technical accomplishment taken Argentina away from the brink and into the last 16.

But that ending, perhaps, belongs to his other story, the one where Messi strolls through games as he strolls past opponents, where everything is a breeze, and he leaves the field having barely broken a sweat, not a hair out of place.

Instead, we were given a more fitting finale, one in which the glory and the honor fell to someone else, to Rojo, and in which Messi spent his final few minutes chasing down loose balls, harrying defenders, throwing himself into tackles, running and hunting and working himself into the ground to make sure that Argentina made it across the line, that it stayed alive.