36 years and no World Cup goals: Peru eliminated by France 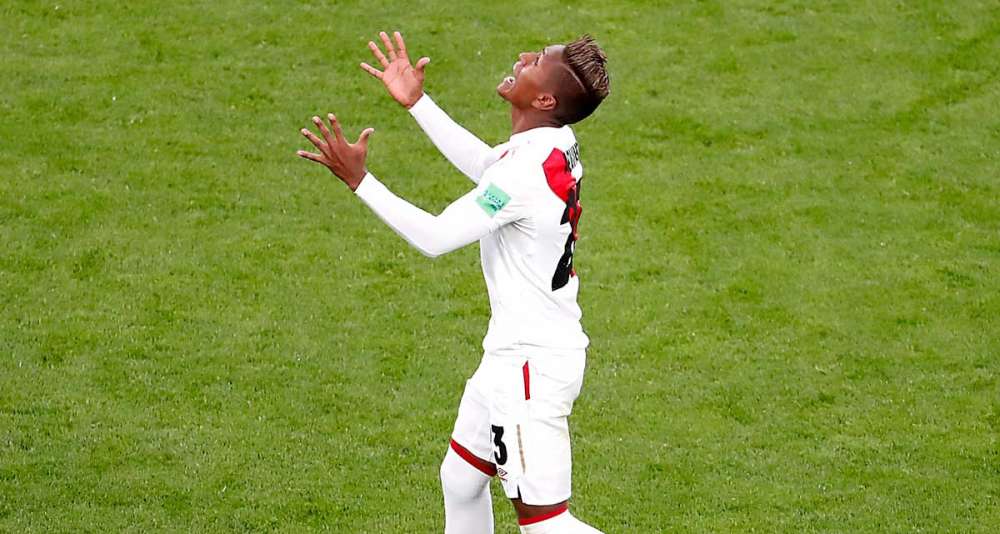 Thirty-six years is a long time to wait to be eliminated from the World Cup without scoring a goal. It was surely not the expectation of the tens of thousands of Peruvian fans who brought their banners, their inflatable llamas and their seemingly unsinkable enthusiasm to Russia to cheer on their team in its first World Cup appearance since 1982.

They came from North America, from Europe and of course from Peru itself, whose capital, Lima, is 8,619 miles removed from the chilly, cozy stadium where Peru was beaten, 1-0, by France on Thursday to dash its World Cup dreams after only two games.

“I’m 43 years old and it’s been 36 years of waiting for my team,” said Luigy Cornejo, a U.S. citizen born in Peru who came from New York to see two of Peru’s matches.

“I also went to their qualifying games in Peru, so I can say I spent a lot of money to follow them but it was worth it. It was not like they played bad. They did a good job. They were just missing goals.”

France will continue on; after winning its first two matches, it has six points and is guaranteed of a spot in the round of 16 even before facing Denmark next week to determine who finishes first in Group C.

Peru, which fell to Denmark by the same score Saturday, will play Australia for pride on Tuesday in Sochi, although one suspects there will still be no shortage of support on the shores of the Black Sea.

“I think Peru deserved more than to go out like this,” said Hugo Lloris, the French captain and goalkeeper. “They are a really good team. They were unlucky in the first match against Denmark. I think they deserved more from that. They had lots of opportunities, but Kasper Schmeichel played a great match in goal and now sadly, they are eliminated.”

Though Yekaterinburg is a great deal closer to Paris, it felt as if Peru were playing at home: with the national team’s red and white colors the dominant ones in the stands, both permanent and temporary, in Yekaterinburg Arena.

“Our fans, the people were incredible,” said Ricardo Gareca, Peru’s coach. “It is something that brings me joy and also pain. It hurts that we are eliminated and don’t have the chance to give them something more for all their support, all their expectations.”

Yekaterinburg lies east of the Ural Mountains that divide Europe from Asia, and the Peruvians arrived by 14-hour train rides, by multiday road trips and even on a red-eye flight from Kazan that landed in Yekaterinburg shortly before 5 a.m. Thursday, which was not too early for the fans to bang drums and sing odes to their national team as they waited for their baggage to come off the carousel.

Despite the intermittent rain, the Peruvians kept up the pace and the volume throughout the afternoon as they converged on the stadium, and then they joined together again for a full-throated rendition of Peru’s national anthem — a scene so full of national pride that even the French players said they were moved.

“In the warm-ups, we had the impression we were playing in South America,” Lloris said. “The atmosphere was fantastic, and you have to really emphasize that: all these people from Peru who came all the way here. And even if it made the job harder for us, it was a great atmosphere to play in, even for those of us on the French team. I honestly can’t say I remember playing in an ambience like this, and I’ve played in 100 matches for France.”

Like Schmeichel on Saturday, Lloris certainly played his part in spoiling Peru’s moment. He was excellent when needed most, making a crucial save in the 31st minute on a low, hard shot from Peru’s star forward Paolo Guerrero.

It was captain versus captain, and Lloris prevailed at close range on a night and in a World Cup when defense has often prevailed. Of the 23 matches so far, 11 have finished by the score of 1-0, and this one might have finished 1-1 if Pedro Aquino’s screamer of a shot in the 53rd minute had been a few centimeters to the right instead of striking the upper left corner of the French crossbar.

“If you want us to win, 5-0, against everyone, you shouldn’t come,” said Didier Deschamps, the France coach. “It’s the World Cup. It’s complicated for everyone. We defended well but the problem was that when we recovered the ball we often lost it again, and so we had to go back to defending again. But this was also due to the pressure of Peru.”

Still, France, stocked with goal-scoring talent, look like a sports car struggling to shift into higher gears. Deschamps shuffled his lineup yet again Thursday, returning veteran forward Olivier Giroud and midfielder Blaise Matuidi to the starting lineup in place of 21-year-old Ousmane Dembélé and 23-year-old Corentin Tolisso and opting for a 4-2-3-1 formation.

But Deschamps left his teenage striker, Kylian Mbappé in place, and it was Mbappé who scored the lone French goal in the 34th minute.

Paul Pogba provided the initial spark and found Giroud, whose shot was deflected by Peru defender Alberto Rodriguez and sent soaring over goalkeeper Pedro Gallese. It landed directly in the path of Mbappé, who turned the falling ball into the net with his right foot.

It was a moment to savor for Mbappé, the fleet forward for Paris Sant-Germain, who is now the youngest goal scorer in World Cup history for France at 19 years 183 days. But it was also a reaffirming evening for Giroud at center forward, where he was often effective, particularly in the short passing game.

“He’s often been there for us,” Deschamps said. “He’s our best scorer, with his specific strengths and characteristics, in his ability to provide support and quick shifts. He was very good today even if he did not succeed at everything he tried.”

The Peruvians can no longer say the same, and after the final whistle Thursday, Guerrero, who had fought and won a legal battle to play here after testing positive for a metabolite of cocaine, burst into tears. Devastated, he covered his face with his jersey for several minutes as players like Matuidi and his Peru teammates attempted to console him.

“I think all my teammates are sad,” Guerrero said. “But we left our souls on the field and I feel proud about that. I can only thank all the Peruvian fans that are always behind us and all those who made the effort to come all this way to Russia.”