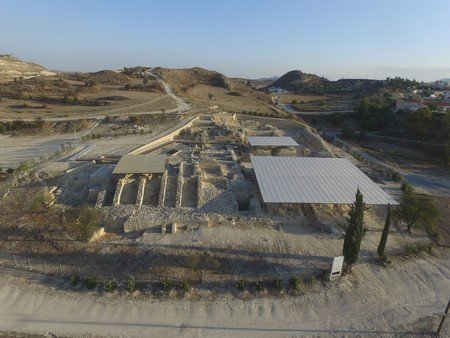 Work is underway on creating an archaeological park at the ancient acropolis of Idalion as part of the EU funded Interreg V-A  Greece-Cyprus 2014-2020 programme, the Transport Ministry said on Friday.

The ‘attractive destinations’ initiative, which aims to promote cultural heritage to spur economic growth, is 85% financed by the EU and 15% by national resources,

It is being implemented by the Antiquities Department, the Lesvos antiquities unit and the Nicosia Development Company and seeks to promote a joint methodology  in protecting, managing and promoting the cultural heritage of Cyprus and Greece through pilot actions at Idalion archaeological site and at Ifestia in Limnos so as to bolster cross-border tourism.

As part of the programme, the Antiquities Department has drawn up a study in cooperation with the Pefkios Georgiades architectural firm for infrastructural projects within the Idalion site.

The area of the ancient acropolis within which there are antiquities will be fenced so as to take the form of archaeological park. The local archaeological museum, which opened in 2008, will operate as the ‘entrance’ to the park.

Studies have also been carried out for two shelters over sensitive parts of the ancient palace. Work on the fencing and the shelters are expected to begin next month.

Information signs will be placed by May 2020 and leaflets and a short guide produced, to be distributed free to visitors.

Finally, by July 2020 an app will be created allowing visitors to download a digital guide of the park to their smart phones and tablets.

The work is part of the department’s long term aim of creating a significant archaeological site at Dali Municipality in the centre of the island and a major hub for the districts of Nicosia, Limassol and Larnaca, it added.

The ancient city was founded by the Achaean hero of the Trojan war, Chalcanor – descendant of Teucer, the founder of Salamis. According to legend, Ancient Idalion is where Adonis – Aphrodite’s lover – was killed by her jealous lover Aris, the Olympian God of War.

The kingdom flourished until the middle of the 5th century BC, when its capital was besieged and captured by the Phoenician kings of Kition. Finds have been unearthed from both settlements and cemeteries in the region, with the earliest remains of human occupation found at the locality of Agridi, dating back to the 7th and 5th centuries BC.

The site houses a museum and Visitor Centre, which showcase its finds, and is also linked with the Aphrodite Cultural Route.

By In Cyprus
Previous articleKeto-Almond bread at Qboo Bakehouse
Next articleUber still in the dark on London taxi licence renewal, 3 days before expiry