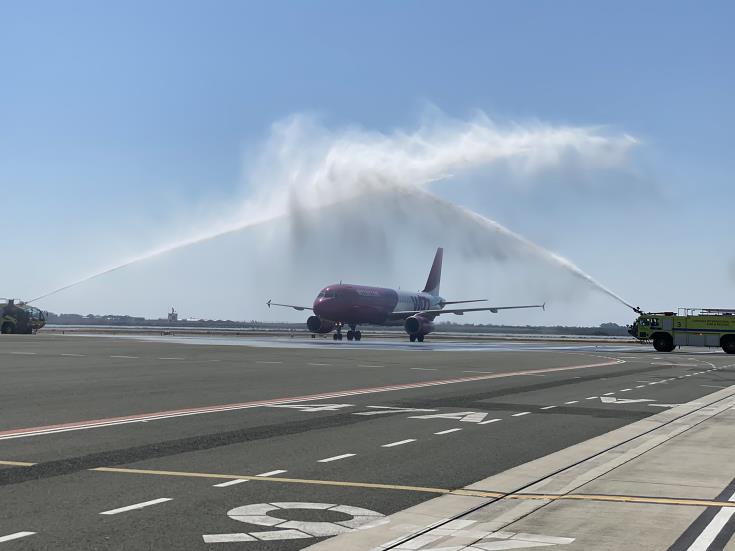 Wizz Air inaugurated on Wednesday its 28th base for two of its aircraft at Larnaca airport. A third aircraft is expected to start flights in August.

Three Wizz Air flights arrived a little before 10.00 am at Larnaca airport and were welcomed with a water salute. Passengers were also greeted at the airport terminal by Hermes Airports, the company managing and operating Cyprus’ airports.

.@wizzair passengers are getting a first-hand experience of the traditional #Cyprus hospitality🇨🇾. We wish them a pleasant stay on our island, and we look forward in welcoming more passengers and seeing our aviation family expanding✈️. 😊#Welcome #Cyprus #HermesAirports pic.twitter.com/ojWUiD2K19

A total of 20 flights are scheduled on Wednesday, with 10 arrivals and 10 departures from and to Krakow, Budapest, Vienna, Sofia, Athens, Thessaloniki, Copenhagen and Katowice with Wizz Air aircraft, including the two stationed in Cyprus.

More flights at Paphos, Wizz Air sets up base in Larnaca

Maria Kouroupi, Senior Manager Aviation Development, Marketing & Communications at Hermes Airports, said that today is a very important day for Cyprus airports and welcomed the two aircraft. She added that 40 thousand passengers travelled from and to Cyprus airports in June, noting that a substantial increase in traffic is expected in July, reaching 40% of the usual capacity.

Happening Now – @wizzair Aircrafts have just landed at Larnaka Airport & are being welcomed by the traditional way of the water arch salutation! #Larnaka Airport has now become the 28th base of Wizz Air….😊#WizzAir #LarnakaAirport pic.twitter.com/if52tapGie

Zsuzsa Poos, Head of Customer Experience and Retail at Wizz Air, said that this was a very big day for the company, which inaugurated in Larnaca its 28th base. She recalled the first Wizz Air flight to Larnaca, 10 years ago, and said that Cyprus and Larnaca airport are among the fastest growing tourist destinations in the company’s flight program. It was high time to take the next step and open here a base, she added.

The company will carry out flights from and to 36 destinations in 20 countries and there will be more than one million seats available in the company’s airplanes, Poos said.

During the first week of July there will be a total of 134 Wizz Air flights, 67 arrivals and 67 departures, while 42 of these flights will be done with the aircraft based in Larnaca.
(CNA)