Without an immediate radical change, there is no place for this Turkey in our Union, says EP President 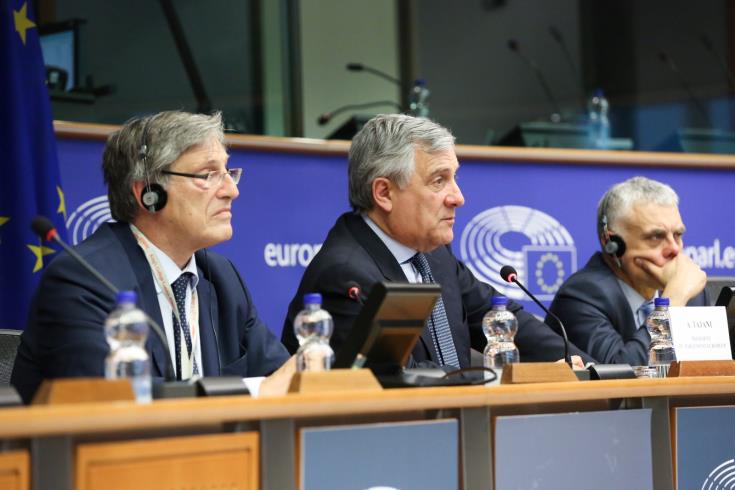 “Our door remains open to Turkish people who should continue to be given an EU perspective. However, without an immediate radical change, there is no place for this Turkey in our Union,” European Parliament President Antonio Tajani has said. Tajani gave a speech on Thursday in Brussels during a seminar on Media and Press Freedom in Turkey, on the occasion of World press freedom day, organised by the European Parliament and the European Commission.

Tajani pointed out that the reason the seminar is focusing on Turkey is because Turkey is among the countries “where press freedom has deteriorated the most”. He said that in the last 10 year – despite the start of accession negotiations – Turkey has lost 55 positions in the Free Press Index and it is now among the worst performers worldwide. In 2017, the EP President said, 73 journalists were arrested in the country.

“According to a report from Die Zeit 155 journalists, arrested after the failed coup d’ état, are still in prison. Amnesty International reports that 180 media outlets have been shut down after July. This unacceptable situation makes it clear that Turkey is turning its shoulders to our core values. It will be hypocritical not to acknowledge this fact and not to draw the inevitable conclusions.
Turkish authorities still have the possibility to reverse this trend. Our door remains open to Turkish people who should continue to be given an EU perspective. However, without an immediate radical change, there is no place for this Turkey in our Union,” he underlined.

Tajani said that freedom of expression is at the very heart of democracy, adding that a country can call itself democratic only if journalists and media can work in a free and independent environment, acting as guardians for the respect of the rule of law.

He added that the 2018 World Press Freedom Index, published by Reporters without Borders (RSF), measures the level of media freedom in 180 countries and launches alarming signals.

“The Index shows that Europe is still the region where press freedom is the safest; but there is no room for complacency. It is at the same time the area where the regional indicator has worsened most in 2018. Malta, Czech Republic, Serbia and Slovakia have registered a sudden worsening of their press freedom indicators. Two cases, in particular, call for our immediate concerns and action: the hideous murders of Daphne Caruana Galizia and Ján Kuciak, who have lost their lives because of their heroic quest for truth.They were courageous people and fine journalists and were not afraid to do whatever was needed to fulfil their duty and to defend our values,” he said.

EP President added that to honour and remember their commitment for media freedom we should introduce a European Parliament annual prize for investigative journalist named after both of them. “Daphne and Jan: we have not forgotten you. We will not forget you. The European Parliament will continue to echo the strong voice of 500 million citizens looking for justice. We do not want just the name of the killers. We want the name of the instigators.
For this, I call on the Maltese and the Slovak authorities to spare no effort in shading full light on what happened, also through the necessary international cooperation among law enforcement authorities,” he pointed out.

Tajani also added that according to the International Federation of Journalists (IFJ), 28 other media representatives were killed so far in 2018 – nine of which only in the hideous recent terrorist attack on 30 April in Kabul. Moreover, he said, 317 journalists are still detained worldwide as we speak, with China and Turkey being the worst countries.

He also referred to fake news and welcomed the recent initiative of Commissioner Gabriel on fake news that requires platform to take responsibility and action against disinformation. Tajani also added that it is important to invest more in media literacy, in particular among young people and to introduce a European network of fact checker. Moreover, he said, Member States are asked to provide financial support to reliable and diversified quality information sources.

By In Cyprus
Previous articleMavroyiannis: Let us continue the talks where we left off to help us clinch a strategic agreement
Next articleEP Commitee on Petitions to visit Turkish occupied Famagusta on Tuesday