With transition talk, May tries to unlock Brexit deal 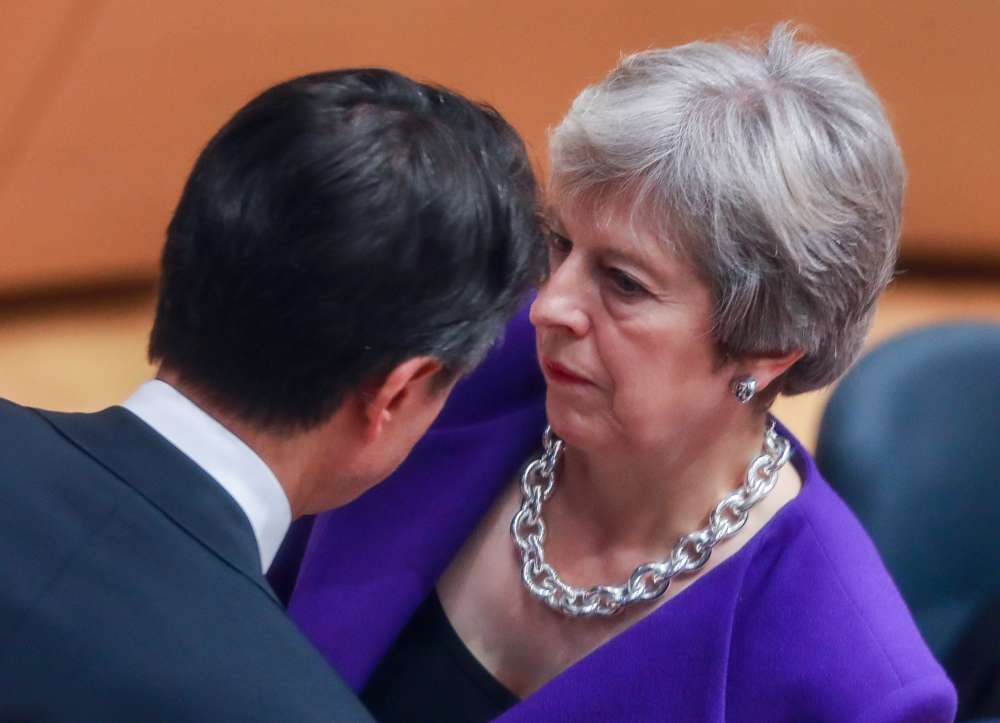 British Prime Minister Theresa May signalled on Thursday she would consider extending a so-called transition period “for a matter of months” after Britain leaves the European Union, a move her critics say is a betrayal of Brexit.

Less than six months before Britain quits the EU in its biggest shift in policy for more than 40 years, Brexit talks have stalled over how to deal with their only land border, between the British province of Northern Ireland and Ireland.

At an EU summit in Brussels, while the mood was more upbeat about the willingness for a deal to ease Britain’s exit, several leaders and diplomats said May had offered nothing new to strike the kind of breakthrough needed to move forward.

The problem centres on a so-called backstop – an insurance policy to ensure there will be no return to a hard border on the island of Ireland, a former focal point for sectarian tensions, if a future trading relationship is not in place in time.

Extending the transition period could mean that if a future partnership is not ready, a backstop, which so far has been unpalatable to the British side, would not have to be triggered. But even an extension will not get rid of the EU’s insistence that such a backstop must be agreed to secure a deal.

“A further idea that has emerged, and it is an idea at this stage, is to create an option to extend the implementation period for a matter of months, and it would only be a matter months,” May told reporters on the second day of the summit.

“But the point is, this is not expected to be used because we are working to ensure that we have that future relationship in place by the end of December 2020.”

A senior British government official tried to play down the significance of May’s consideration of such an extension, saying it had only “come up in negotiations in recent days” and that it was one of several options to help move the talks on – something London desperately wants to see.

And a French official said any extension would come with conditions attached – it would not be automatic, it would be decided closer to the time and that it would have to be agreed by the leaders of the 27 other EU nations, probably unanimously.

May has tried to use the summit in Brussels – once seen as the stage for a possible breakthrough after more than a year of talks – to offer a softer tone to her EU counterparts after another such meeting last month ended in acrimony.

Before leaving them to dine on Wednesday, May called for cooperation. “The last stage will need courage, trust and leadership on both sides,” she told leaders, according to an official.

Her plea was met by some understanding of her predicament.

May’s plans have been criticised by all sides at home — Brexit campaigners accuse her of making Britain a vassal state, EU supporters say they offer the worst of all worlds and others have expressed frustration over the lengthy talks.

She also faces a rebellion from her parliamentary partners, Northern Ireland’s Democratic Unionist Party, which has threatened to vote against her government’s budget if she concedes to the EU’s demands over the backstop. They say the proposal would tear Northern Ireland from the rest of Britain.

Diane Dodds, an EU lawmaker from the DUP, said the extension did not ease her party’s fears. “All very well, but this doesn’t do anything to actually change the backstop … Therefore it does not address any concerns, it offers no reassurance.”

With a crucial vote in parliament on any deal, May, who lost her Conservative Party’s majority in an election last year, risks a damaging defeat. That could trigger a leadership contest, a so-called no deal Brexit and even a new election.

The parliamentary vote, and May’s political struggles, were the focus of much of the other EU leaders’ dinner late on Wednesday, an aide to French President Emmanuel Macron said.

But a senior EU diplomat was more blunt. “There is nothing. We have nothing. For now, we have a no-deal,” the diplomat said, adding leaders were waiting for Britain’s budget, due to be presented to parliament in late October, to be passed.

With the talks stalled and little prospect of a quickening of pace anytime soon, many Brexit supporters and even critics of Britain’s departure are airing their frustration over an exit which some campaigners had said would be the easiest deal ever.

And the suggestion — first made by EU negotiators — that Britain could stay firmly in the EU’s sphere for longer than the 21 months expected has fired up those who already say Britain has already given up too much in the negotiations.

“Many Conservative MPs (lawmakers) are making clear to the government that we won’t support legislation seeking to prolong transition and large payments for no good reason,” said John Redwood, a Conservative Brexit supporter.