Will “The Prince” dethrone “King Bibi” in Israel? 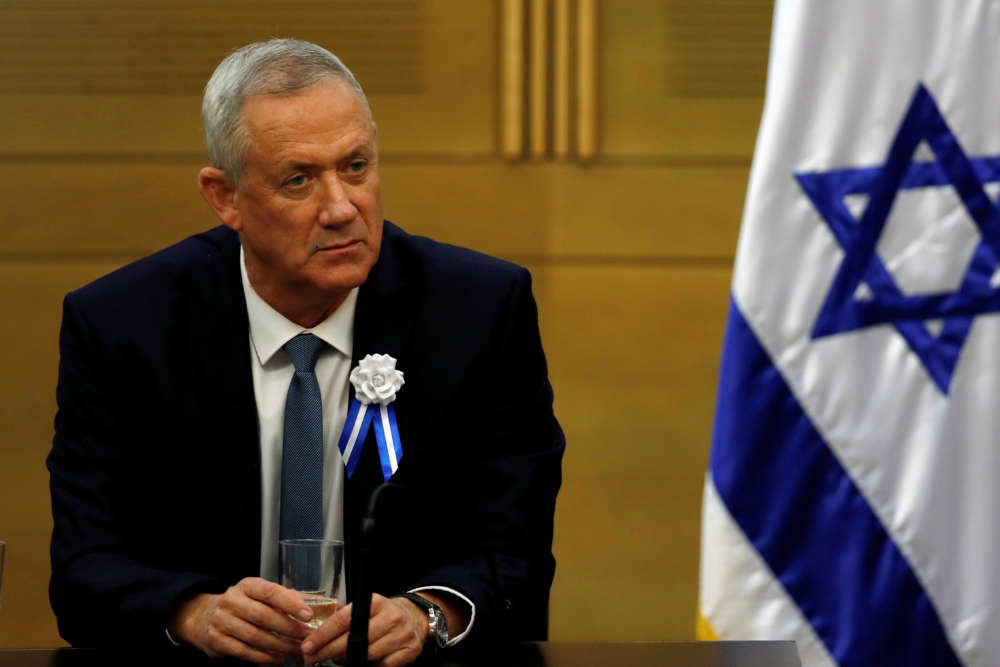 Confronted by a right-wing heckler while campaigning for last month’s parliamentary election in Israel, Benny Gantz grabbed the man by the lapels and glared down at him.

“No one’s doing anything wrong by you,” Gantz, who leads the centrist Blue and White Party, told him. “We only want what’s good for you.”

The encounter was part embrace, part menace, and highly ambiguous. So is much else about Gantz, who will try to form a government after Prime Minister Benjamin Netanyahu’s decision to abandon his own attempts to put together a new coalition. [

President Reuven Rivlin turned to Netanyahu first after the Sept. 17 election, in which no party won a majority. Gantz, was next in line after Blue and White won 33 seats in parliament, one more than Netanyahu’s right-wing Likud.

The 60-year-old general, nicknamed “The Prince” as he rose through army ranks, now has the chance to dethrone Netanyahu, who is sometimes referred to as “King Bibi” after dominating Israeli politics for more than a decade as prime minister.

As chief of the Israeli military between 2011 and 2015, Gantz was a consensus figure. He has tried to retain his broad appeal as head of Blue and White, a newly formed party named after the national colours.

But what he would do in power is not completely clear as he had avoided committing himself on some important issues.

Gantz casts himself as more diplomatically accommodating than Netanyahu, urging redoubled efforts to restart peace talks with the Palestinians, but has stopped short of any commitment to the statehood they seek.

Supporters see Gantz’s reticence as an attempt to calm the political scene after two elections this year – Netanyahu also failed to form a government after an April ballot. They say Gantz would rather keep his own counsel than sap his credibility with promises that voters know will never be delivered.

As top general, Gantz orchestrated two Gaza wars in which around 2,300 Palestinians were killed.

The more moderate Palestinian Authority has said it is open to talking to any Israeli leader. But Hanan Ashrawi, a senior Palestine Liberation Organization official, also said before the September election that Gantz was no different from Netanyahu.

Gantz, who is 6 foot 3 inches (1.91 metres) tall, was brought up on a collective farm founded by Holocaust survivors including his parents, and had a stint in a religious school. He is married to an ex-paratrooper with whom he has four children.

Throughout the election he attacked Netanyahu over corruption allegations that have dogged the prime minister for years, and which the veteran leader denies.

Netanyahu’s counter-charge that a suspected Iranian hack of Gantz’s cellphone may have opened him up to blackmail by Israel’s enemy did not appear to dent the challenger’s image.

A more earthy orator than Netanyahu, he makes occasional scriptural word play and is given to reminding listeners of his military background. When his party won more seats than Netanyahu, he spoke of having fulfilled his “mission” and of his rival having failed in his.

Netanyahu has cast Gantz as a “weak leftist” who was gun-shy on Iran and the Palestinians while in uniform.

It was, however, Netanyahu who appointed Gantz as Israel’s top general and, at the time, praised him as “an officer and a gentleman … a warrior and a human being”.

As a brigadier-general in 1999, Gantz took over a liaison unit to Lebanese allies. By the following year, when Israel withdrew from south Lebanon, Gantz was a media darling.

He went on to serve a relatively short period in the West Bank, where a Palestinian revolt raged. Gantz later commanded forces on the Lebanese border but was reassigned before the inconclusive 2006 war with Hezbollah, so was spared much of the after-action blowback from an Israeli inquest.

How he won the nickname “The Prince” is unclear. Some say it stemmed from his assured rise through the ranks, others from what critics call his sense of entitlement.

Gantz has dismissed suggestions he lacks the stomach to fight. Referring to a Hamas military commander whom he ordered assassinated in 2012, he said in January: “The heads of the terrorist groups need to know that Ahmed Jaabari was not the first, nor may he be the last.”

Retired U.S. general Martin Dempsey, who as chairman of the Joint Chiefs of Staff between 2011 and 2015 was Gantz’s counterpart, recalled him as a “superb leader” in that role.

Gantz has made no secret of learning on the job, and is leaning on his partners in the Blue and White leadership, who include two other former military chiefs of staff, a former defence minister and a former finance minister.

By Annie Charalambous
Previous articleEU considers Brexit delay as Johnson says that would lead to election by Christmas
Next articleWall St propped up by Apple, Boeing