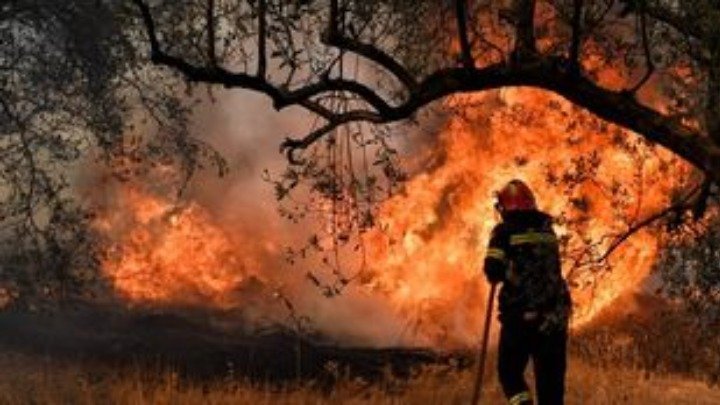 The firefighting forces operating in the area of Stamata, Attica region on Tuesday to contain a wildfire that broke out earlier in the day were strengthened.
22 fire engines with 68-member crew, three teams of firemen on foot, the municipality’s water trucks along with four firefighting aircraft and 5 water dropping helicopters are currently battling the blaze that very close to inhabited areas.
Meanwhile, Civil Protection’s emergency number 112 was activated in the wider region of Stamata and Rodopoli informing the citizens to be on alertness and follow the authorities’ instructions.

“Strong fire fighting forces are doing whatever possible to prevent the flames reaching the houses of the settlement “Galini” in Stamata. The strong winds reaching now 6 on the Beaufort scale make the firefighters’ mission very difficult,” Fire Brigade’s spokesman Vassilis Vathrakogiannis said to the Athens-Macedonian News Agency on the wildfire that broke out on Tuesday morning and is raging between Stamata and Rodopoli in Attica region. Earlier, the mayor of Dionyssos Yiannis Kalafatelis said to ANA that the situation is very difficult.