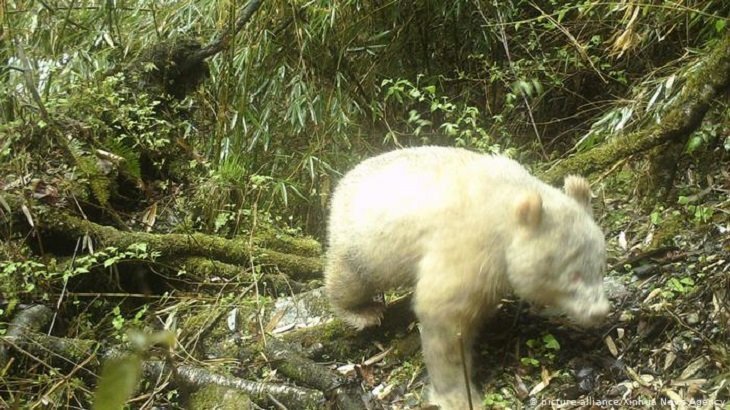 A nature reserve in China has captured what is believed to be the world’s first image of an albino panda.

The Wolong national nature reserve in the south-western province of Sichuan released a photo taken in April of an all-white giant panda in the wild, crossing through a forest.

According to scientists the panda has albinism – a rare genetic condition in which there is a total or partial lack of the skin pigment melanin – as it has an all-white body and reddish eyes.

In a statement, the reserve said the panda appeared “physically strong, with a steady gait”, evidence that the condition had not affected the animal’s normal functioning.

Local researchers said they believed the panda to be between one and two years old. The sex could not be determined from the photo, taken by an infrared camera installed in December last year to monitor wildlife in the area.

Authorities also said the reserve would install more infrared cameras to track the albino panda and its development. Scientists also expressed hope of seeing its offspring. “If we can capture the next generation, the research value will be even greater,” the researchers said.

Spotting the albino panda is incredibly rare, given how infrequently albinism manifests. The giant panda, native to China, is the rarest member of the bear species, with fewer than 2,000 remaining in the wild.

Brown pandas, whose fur colour is also considered to be caused by a mutation, have previously been sighted in China’s Qingling mountains in Shaanxi province.

There are an estimated 200–300 Qinling pandas living in the wild.