What are Cypriots’ perceptions about refugees and migrants? 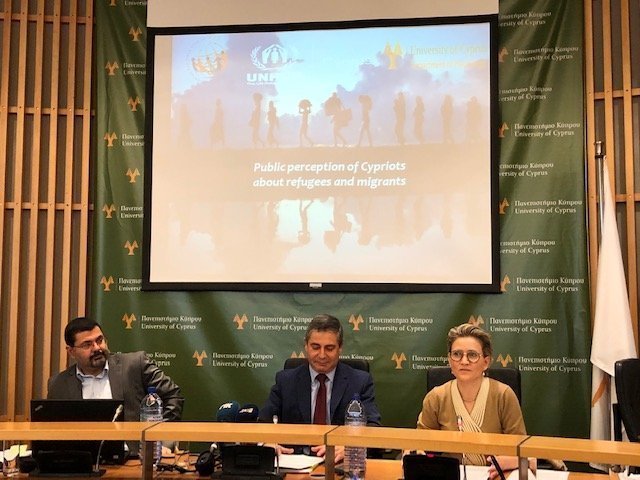 The majority of Greek and Turkish Cypriots acknowledge that refugees need support, however, the idea is met with disproval, a study on Cypriots’ perception about migrants and refugees found.

According to the findings of a research, Greek Cypriots often don’t classify wealthy Russian and Chinese individuals as migrants, since their perception does not fit with the dominant representation of the migrant as a poor person.

The findings on the perceptions of Cypriots regarding refugees and migrants were presented on Friday, during an event at the University of Cyprus.

This study in both the Greek Cypriot and Turkish Cypriot communities was undertaken by the University of Cyprus Centre for Field Studies (UCFS), for the Office of the United Nations High Commissioner for Refugees (UNHCR) in Cyprus between September and December 2018. A similar study was conducted in 2015.

Speaking during the event, UNHCR Representative in Cyprus, Katja Saha, said that worrisome trends of labelling refugees as a threat have recently been intensified also in the political and public debate in Cyprus.

She went on to say that a total of 10,500 people received protection in Cyprus over the course of 16 years, which amounts to about 6% of the population. “In the global picture this is a very modest proportion when compared for example to Lebanon where 1 in 4 people is a Syrian or a Palestinian refugee” Saha added.

She said that the reference is not made to underestimate the impact of the increased number of asylum seekers and refugees in Cyprus “but to help us realise that these flows should be manageable.”

Addressing the same event, the Rector of the University of Cyprus, Tasos Christofides, said that the research carried out on behalf of the UNHCR will help society understand the realities of the migration and refugee crisis.

By trying to understand people’s perceptions, we may address any misconceptions effectively and as a society we can take the necessary remedial measures, he added.

“We need to understand that migrants and refugees are people in need of inclusion, fair treatment and understanding” Christofides said.

He added that since the previous study in 2015, society seems to have developed emotionally, and concluded by saying that “through integration we are better off.”

The results were presented by Charis Psaltis, Associate Professor of Social and Developmental Psychology at the University of Cyprus. According the main findings of the study, both communities acknowledge that refugees need support and that providing support to refugees is a responsibility of the state. The Greek Cypriot community thinks that the government is already providing enough support to refugees in Cyprus. Turkish Cypriots, on the other hand, do not believe the same for the “authorities” in the Turkish-occupied part of Cyprus.

Despite the concerns expressed by the two communities, the majority of Greek Cypriots and Turkish Cypriots support the idea that refugees should be living integrated in the local society, and not be isolated in camps. This idea was supported also in the 2015 study, thus making it a viewpoint that is supported consistently in time by both communities. However, support for integration was limited by majority support for other policies, such as one that could introduce an upper limit to the number of refugees the island accepts.

There was also disapproval of the idea of giving to refugees residing in Cyprus for more than five years the ability to obtain Cypriot citizenship. However, compared to the 2015 results, this disapproval rate is decreasing in the Greek Cypriot side to 50.8%, while for the Turkish Cypriot side opposition to granting “citizenship” remains unchanged at 67.8%.

The main findings of the quantitative study suggest that in both communities the levels of meaningful contacts between the local population and refugees and/or migrants have increased, compared to the 2015 survey and results.

Even though the wider public’s general feelings towards refugees, migrants and the phenomenon of migration in general, are today neutral to negative, compared to 2015, there is a significant improvement of attitudes in both communities.

Furthermore, there are certain concerns expressed and threats perceived in both communities regarding migration. These fears are mainly focused around issues of damaging the economic growth and rise in criminality rates.

There is also a concern that due to its size, Cyprus is unable to host “so many” refugees and/or migrants.

A significant finding derived from the qualitative study was the confusion in the use and understanding of the terms “refugee” and “migrant”. Specifically, the analysis of the focus group discussions, during the first stage of the study, revealed that in both communities, but mostly in the Greek Cypriot side, the terms “refugee” and “migrant” are confused by many people.

Moreover, the study shows that in the Greek Cypriot community, a social class division within the group identified as migrants was visible, as wealthy people coming mainly from Russia and China did not fit with the dominant representation of the migrant as a poor person who came to Cyprus in search of a better life.

UNHCR will use the findings to develop specific and informed strategies in their ongoing protection and advocacy work on the island.