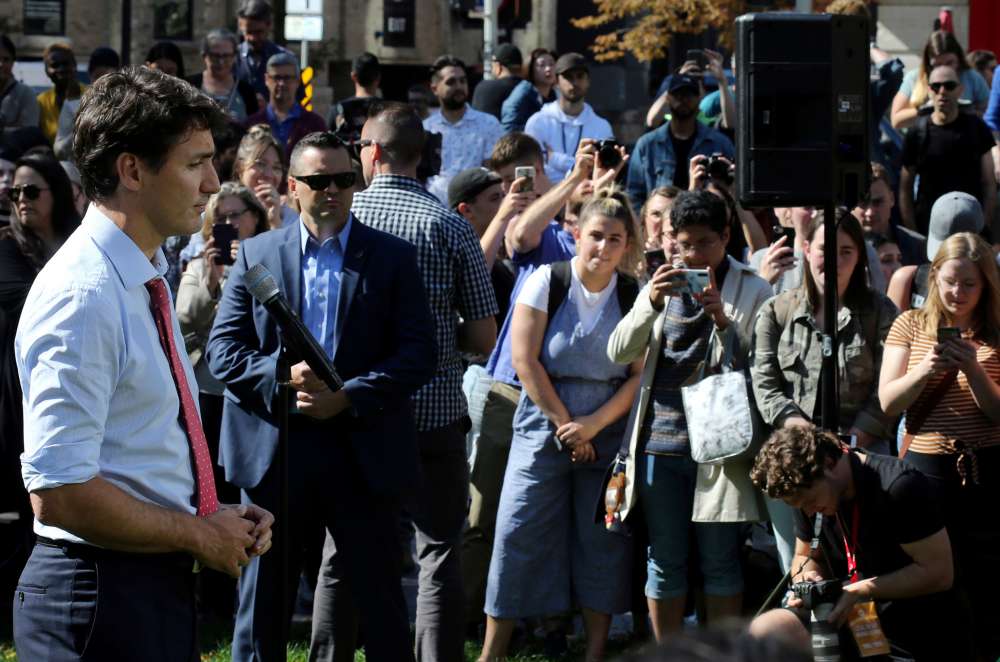 Canadian Prime Minister Justin Trudeau is in major political trouble just weeks before facing voters, tripped up by a penchant for poor jokes and dressing up that have let him down before and are now raising accusations of racial insensitivity.

Trudeau, 47, an avowed defender of Canada’s multiculturalism policy, has apologized repeatedly for donning brown face makeup at a 2001 “Arabian Nights” party when he was a 29-year-old teacher at a Vancouver private school.

A picture that emerged on Wednesday night showed him wearing a turban and a white robe at the party, with his face covered in dark makeup. “I dressed up in an Aladdin costume and put makeup on. I shouldn’t have done it,” he told reporters after Time magazine published the image.

A new video of him in blackface in the early 1990s emerged on Thursday.

The scandal could sink his chances of re-election in the Oct. 21 national vote in which he already faced a tough challenge from the opposition Conservatives. Critics expressed disbelief that the son of former Liberal Prime Minister Pierre Trudeau – the father of Canada’s multiculturalism system – could have been so insensitive.

Trudeau, who has said he will not resign, said he did not realize at the time how offensive blackface was and asked Canadians for forgiveness.

“If he really claims ignorance, then he was living in some strange sheltered world,” said Ladonna James, a brand and marketing executive in Toronto. “Because otherwise, you cannot claim ignorance on that. He’s an educator. And his father was the prime minister, who was loved by immigrants.”

Trudeau’s dress sense has landed him in trouble before while in office. He and his family wore a number of elaborate outfits during a 2018 official trip to India, sparking widespread scorn from critics who said he went over the top.

Liberal insiders say part of the issue is that Trudeau – who used to throw himself down stairs as a party trick when younger – does not always think twice before he tries to be funny.

“Before he does a public event, his team tells him: ‘Don’t make jokes,'” said one well-placed Liberal.

The prime minister himself acknowledged the issue last year after he interrupted a woman who used the word “mankind,” saying he preferred “peoplekind” instead.

“I don’t necessarily have the best of track records on jokes. … I shouldn’t be making jokes even when I think they’re funny,” he told reporters after days of mockery.

In May 2016, as wildfires ripped through an Alberta oil-producing region, Trudeau opened a meeting with legislators by making a quip about the “Star Wars” movie franchise.

“PM Trudeau makes me not want to call myself a Canadian. ‘Star Wars’ jokes when we just lost one of the key towns of Alberta?” commented one irate Twitter user.

Liberals who have worked with Trudeau say his gregariousness masks a sometimes shy personality and that his off-colour jokes are a defence mechanism.

“He is not naturally funny and it doesn’t come easily to him and I think he tries too hard,” said a second Liberal.

After the first damaging picture emerged on Wednesday night, Trudeau told reporters that “the fact of the matter is that I’ve always – and you’ll know this – been more enthusiastic about costumes than is sometimes appropriate.”

A Liberal strategist who has worked on election campaigns said theatricality had long been part of the Trudeau image.

“I don’t think he’s racist. I think he’s ‘Mr. Dressup,’ to tell you the truth,” the strategist said, referring to a well-known Canadian children’s TV show. “He’s been playing with personas and ways of appearing in public for most of his public life. And I think that he just saw this as another costume.”

Trudeau visibly struggled on Thursday to explain behaviour that appalled many Canadians, telling reporters that his life of privilege had blinded him to the fact his actions were wrong.

“It wasn’t a good idea. It was a terrible idea,” he said in Winnipeg, Manitoba. “I have to recognise that I let a lot of people down.”

Some opposition leaders said Trudeau, who has long cultivated a reputation as a progressive, was merely a hypocrite. Trudeau’s main rival, Conservative Party leader Andrew Scheer, has hammered away at the prime minister for “not being as advertised.”

Ryerson University communications professor Cheryl Thompson said the fact that Trudeau, born when his father was in office, grew up in the public eye meant that people felt they knew him.

“I think he has an authenticity issue: I don’t know what’s real anymore,” she said. “When you feel like we know people, our expectations are a lot higher. Those expectations have been thrown out the window.”